Is sequencing error a function of the nucleotide being read?

Checking out on Google Scholar, I can see that for Illumina (just to consider one example) the sequencing error rate is of the order of 0.001-0.01 per nucleotide.

Talking about sequencing error, let's consider mismatches (substitution of one nucleotide by another) only. Knowing the "true" nucleotide at a given position, is it as likely to be read as any other specific nucleotide during a mismatch or are there bias? For example, if the true nucleotide is A, is it more likely to be found being as a G (as they both are purines) than a T or a C? Are some nucleotides more likely to be misread than others?

I am hoping the answer won't depend too much on the sequencing techniques.

Unfortunately, it does depend on sequencing techniques.

For example, in Illumina sequencing, each sequence fragment is amplified (in order to get a stronger signal) and forms a cluster on the microarray. Each cluster is sequenced by cycles of: 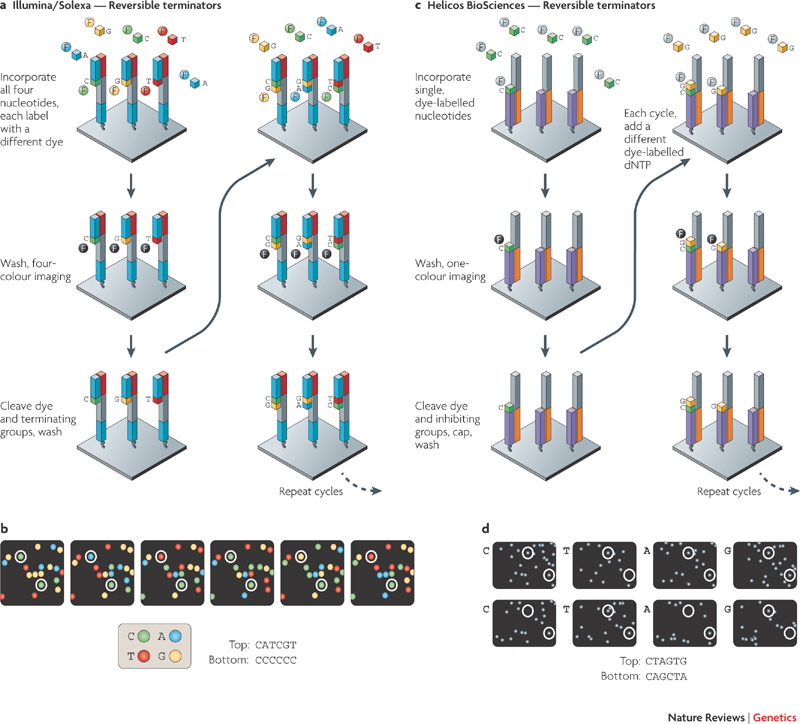 This way, each fragment is synthesized, one nucleotide at a time, and each nucleotide that is incorporated gets detected. However, the first step is not flawless: sometimes more than one nucleotide gets incorporated into a certain DNA fragment, or no nucleotides get incorporated. Eventually, the DNA fragments in a cluster (all containing the same sequence) will fall out of sync ("phasing") and the fluorescent signal will become less clear, with a mixture of different colours. This is the main cause of sequencing error for Illumina machines, and also the reason why Illumina reads are relatively short (~300bp).

So to answer your question, in this example, nucleotides may be erroneously read as nearby nucleotides in that sequence. Errors will vary using other sequencing methods and how those methods work.

The article I linked earlier explains various sequencing methods in more detail. (Unfortunately, it's behind a paywall so some may not be able to view it.)

Not the answer you're looking for? Browse other questions tagged molecular-genetics dna-sequencing sequence-analysis or ask your own question.

11
What are the limitations to current nucleotide sequencing technologies?
10
What's the difference between shotgun sequencing and clone based sequencing?
9
Comment on the introduction to a bioinformatics paper
4
Trying to understand the big picture behind DNA sequencing, alignment and searching
3
To what extent is the genetic code more than just a code?
2
Is DNA sequencing coverage a function of sample purity?
3
Understanding the strategy of Sanger DNA sequencing