Cause of hexadactylisim in Amish people

Is it caused by inbreeding of many generations within an isolated population?

Yes, you pretty much nailed it. Inbreeding of (and from) an isolated population.

According to wikipedia > polydactyly, there are 39 known polmorphic sites underlying variance in polydactyly. It is therefore not a trait with a simple mode of inheritance.

There are two important (somehow related) concepts to understand to explain the relatively high frequency of polydactyly (and other genetic disease such as maple syrup urine disease) in Amish.

If you have no absolutely no background in biology, the following might be a little bit complicated. You might want to make sure you know some concepts (such as deleterious, recessive, dominant, homozygous, Hardy-Weinberg equilibrium, locus, allele and of course inbreeding and population bottleneck) by googling them.

I will, here talk only about one mechanism by which inbreeding causes those diseases.

There is a positive correlation between how deleterious is a mutation and how recessive it is (the more deleterious, the less dominant, the more recessive). The post "Evolution of dominance of alleles" will probably help you to understand why this is true.

The Amish went though an important bottleneck, there was a time when the descendent of the modern-day Amish reproduced with everybody and at some point, they stopped doing so as they decided to create the amish community (I actually know little about the Amish history but I assume something similar happened). This community was formed by about 200 families only (according to this not-necessarily-trustable source, so very little genetic variance) in 1693 in Switzerland (according to wiki). They probably "won" by not having the alleles coding for clubfoot, sickle-cell and cystic fibrosis alleles (just to cite a few example) but they "lost" by drastically increasing the frequency of alleles coding for polydactyly (and some other diseases).

Short answer
Yes, the high frequency of polydactyly in the Amish is caused by inbreeding.

Background
The polydactyly in the Amish is just one of the symptoms of Ellis-van Creveld (EvC) syndrome. EvC syndrome is an autosomal recessive disorder, involving polydactyly of the hands (see figure), short stature with shortening especially of the forearms and lower legs and, in at least half of all cases, congenital heart malformation. In the Amish of Lancaster County (Pennsylvania), EvC syndrome occurs at high frequency and is caused by mutations in the EVC gene. 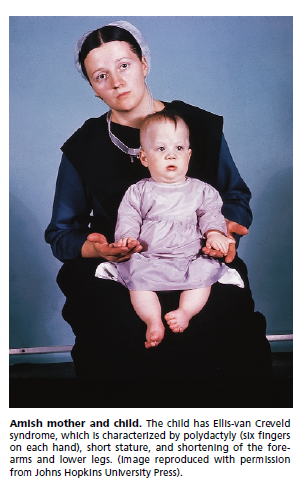 The Amish have two characteristics that resulted in the high occurrence of EvC syndrome. First, they are descended from a limited number of founders who immigrated during the eighteenth century to the United States from Switserland, via Germany in the 1690s. Second, the Amish are endogamous, i.e., they marry only within their community. Hence, gene flow is exclusively centrifugal, i.e., members may leave the community but ‘outsiders’ do not join it and thereby introduce exogenous genes.

All EvC cases in the community are traceable to a single couple, Samuel King and his wife, who immigrated to Eastern Pennsylvania in 1744, thus demonstrating founder effect and a recessive pattern of inheritance.

Not the answer you're looking for? Browse other questions tagged human-genetics or ask your own question.

7
Evolution of dominance of alleles

8
What kind of event would cause the current Mitochondrial Eve to be replaced by a new one?
26
How many people are required to maintain genetic diversity?
3
Is there a realistic “family tree” model for the human population?
5
Is this formula describing the loss of unfixed genes from a population accurate?
3
What is a gene transcript, how is it different from an allele?
1
Is genetic purging based on random shuffling of the genes of an individual or is it more intentional way of removing deleterious recessive alleles?
2
Fst genetic distance: Autosomal vs. mtDNA
2
Rationale behind Most Recent Common Ancestor (MRCA)?