Madrid, Noise by the river: Bird or cricket?

I currently live in Madrid, Spain. In July there was a loud animal near the river, in an out of town area surrounded by grassland, with trees along the river.

It's continued into August, though it has reduced.

It sounds like a cricket in general tone and rhythm, but it is always high in the trees, and sounds too deep to be an insect. It's in the frequency range of a squawking bird, so if it's a cricket it must be huge.

On the other hand, if it was a bird, I should have been able to spot one.

Does anyone have any idea what it is?

The sound is rhythmic, rasping note, with two beats of equal duration but slighly different tone, repeated over and over again without any pause. The animal that makes it calls continuously for long periods.

EDIT: thanks to AliceD for the comment, I didn't realise we had cicadas in Europe. It could be a cicada, but it's deeper and more consistent / regular in its song than this one:

In this case i am going to agree with AliceD, because I live in Greece and here we hear cicadas everywhere. But in Madrid, there is a other kind of cicada that its "song" is more noisy and more deep.In this video you can hear how your cicada sings.https://youtu.be/mah26og11ms

As suggested by AliceD, it does indeed appear to be some kind of cicada. I went down the river and heard one calling, unusually far from the river (30m) where there are lower, newly planted trees. I was able to approach it and take this photo which unfortunately isn't very good.

It's possible that it's even the same species as the video I added to the question. It may be that the cicada in the video did not sing with a regular pattern because it was disturbed by the observers. My cicada refused to sing at all while I was watching him, preferring not to draw attention to himself. I took 3 photos before he began to walk up the tree. On my fourth photo he became startled, flew off, and immediately resumed singing elsewhere.

The cicada in the video sounds more tinny than the ones by my river. That may be an audio effect. 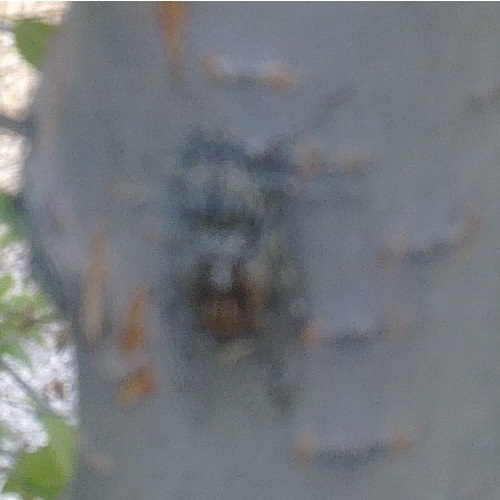 The originally posted song and video suggest a cicada in the genus Cicada (the type genus of the family Cicadidae, which is known from southern Europe, eastern Asia, and north Africa); some identified recordings of this genus can be found at this page on European cicadas. So far I can only find references to C. orni and C. barbara in Spain, but the recordings of those species given on the European cicadas site don't exactly match, although the physical appearance does suggest C. orni (keeping in mind that the white waxiness often gets rubbed off adult cicadas over time). Since the orni recording on the website is from Slovenia, it may just be that the cadence of the song in that location differs from that of Spain (or in different temperatures, or in different courtship contexts). There are a few other Youtube videos described as orni from Spain with similar sounds (e.g., https://www.youtube.com/watch?v=3Z4STY71C-8). I don't know if there are other candidates besides orni and barbara in Spain.