Are genes uniformly dispersed throughout the genome?

I think that telomeres and centromeres are regions with a very low gene content (= regions that contain few genes). To the exception of telomeres and centromeres, are genes uniformly distributed throughout the genome or do they tend to clump together or to scatter as much as they can? Do genes tend to clumped or avoid specific regions such as regions with low mutation rate or low recombination rate?

No they are not. High gene density is correlated with GC content. Most genes are found in GC rich isochores, which are not distributed uniformly (as can be seen on any karyotype). It is also shown through direct sequence analysis (gene density shown in red, GC content in green): 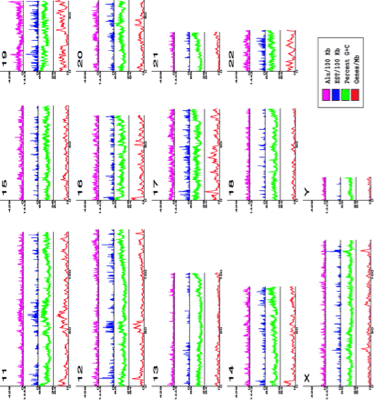 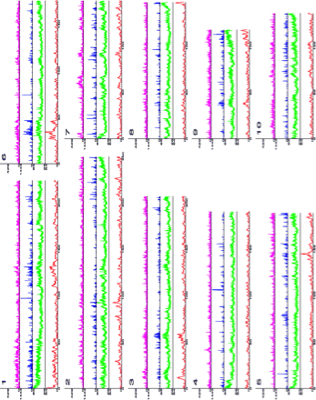 This inhomogeneity, the net result of millions of years of mammalian gene duplication, has been described as the “desertification” of the vertebrate genome. Why are there clustered regions of high and low gene density, and are these accidents of history or driven by selection and evolution?

Desertification refers to this 1985 article by Ohno:

The net consequence of hundreds of millions of years of continuous gene duplication is the desertification of the euchromatic region of modern vertebrates; the average distance between still functioning gene loci becoming progressively longer.

This would seem to suggest that these deserts are the result of gene duplication and subsequent degeneration into pseudogenes, though this is surely not the only cause. I'm not sure that your last question or those posed by Venter et al. have an answer as of yet. This more recent paper offers some interesting ideas (references removed for brevity):

More than 20 years ago, Ohno (1985) postulated the desertification of the euchromatic region of the higher vertebrates’ genomes owing to continuous gene duplication events followed by degeneration of newly emerged gene copies in their evolutionary history. Only with the first release of the complete sequence of the human genome in 2001 was Ohno’s prediction of the existence of such deserts confirmed. Another mechanism to generate imbalance of gene deserts between chromosomes might be large intra-chromosomal duplications, from which some mammalian-specific gene deserts appear to have evolved. However, the functional or evolutionary significance of gene deserts is not yet fully understood. At first glance, gene deserts seem to be devoid of biologic functions because of their lack of protein-coding DNA. Despite this, some gene deserts have been shown to contain important regulatory and sometimes ultraconserved regions for neighboring genes that function over large distances. In addition, the observation of stable gene deserts with homologous flanking genes (often transcription factors), which are maintained for long evolutionary durations, as well as the existence of numerous conserved nongenic sequences in mammalian genomes suggest that gene deserts are not just genomic junkyards but instead might be of functional significance. However, some gene deserts can be deleted without noticeable phenotypic effects. Thus, it remains unclear whether the uneven accumulation of gene deserts in eutherian chromosomes, which appears to be the strongest causal agent for the observed relative lack of a NG/LC relation in the genomes of placental mammals, is simply a byproduct of their genome evolution and possibly the long-term decrease in population-size, as would be suggested by the enrichment of gene deserts along the evolutionary lineage leading to mammals. Upcoming detailed reconstructions of ancestral vertebrate genomes will help clarify these points.

Alternatively, this particular architectural feature of eutherian genomes might be linked to some of their morphologic, physiologic, neurologic, and cognitive evolutionary innovations, possibly by regulating genes with essential functions in development. It has recently been hypothesized that regulatory elements in gene deserts function in the regulation of core vertebrate genes. Furthermore, approximately 20% of conserved noncoding elements are eutherian-specific. Thus, the uneven distribution of gene deserts could itself be caused by an underlying pattern of uneven distribution of some core genes in placental genomes. This hypothesis should be tested in the future.

Not the answer you're looking for? Browse other questions tagged genetics dna chromosome or ask your own question.

10
Why did scientists think humans had 100,000 genes (before the Human Genome Project)?

0
Would two species of yeast with similar genome sizes have the same number of genes or chromosomes?
2
Why is the human body hair not uniformly colored?
2
Understanding conclusions that functional regions are under negative selection?
6
What does it mean to "map the human genome"
1
Are the genes for transcriptional factors close to their targets in the genome?
2
Is there any system how genes are spread across chromosomes?