What happens to the excess immune cells or WBC in our body?

When we have an infection our immune system produces a large amount of white blood cells (WBCs) in our body to fight against the pathogen or parasite. My question is after the immune response has finished fighting the pathogens, what happens to the excess cells and antibodies that presumably are no longer needed? Will they disintegrate themselves, is there a final step in the immune response to dispose of these cells, or are excess of these cells and proteins present as if they are not in excess (they are filtered no more so than when at normal levels)?

The process you are asking about is called the termination of the immune response, and for a long time it was not studied very much for some reason, with scientists preferring to analyze initiation instead. However, this has changed in recent years, and while we still don't know a good deal, the picture is much clearer than it had been a decade or three ago.

Here is a special edition of Immunological Reviews focusing on termination of the immune response. While the site says you need to pay to access each article, they're actually available for free in PubMedCentral, so just look it up there for access. For a very brief overview, this section of the Wikipedia article on inflammation lists some of the mechanisms involved.

In regards to your question about immune cells and antibodies, a couple of things happen. First, the vast majority of responding cells are either "turned off" or directed to commit suicide (apoptosis) by a variety of signaling mechanisms, such as anti-inflammatory cytokines like IL-4, IL-10, IL-13, and IL-35, along with other molecules like TGFβ and IL1RA, soluble receptors to pro-inflammatory cytokines like TNFα and IL-6, or through "death receptors" like Fas/CD95 and others. However, some cells are prompted to turn into long-lived memory cells, which are able to be quickly activated upon re-exposure to antigen, in many cases completely clearing it without the need for a full-fledged immune response (such as one generating fever and sickness).

As for antibodies, like most circulating serum proteins, they are metabolized mainly in the liver and can be excreted via the kidneys. Their half-lives vary by isotype, but can be as long as three or more weeks. This is assisted by FcRn, the neonatal Fc receptor, which recycles antibodies back into circulation, protecting them from breakdown: 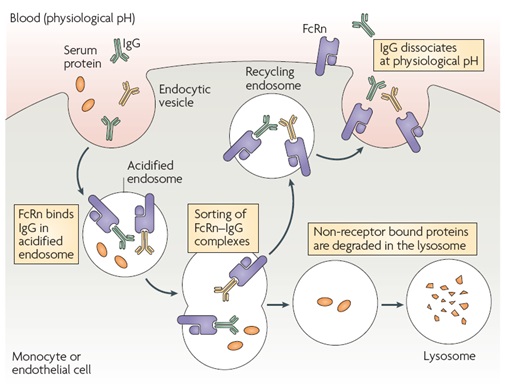 Not the answer you're looking for? Browse other questions tagged cell-biology immunology or ask your own question.

14
If all B cells are present at birth, why should the primary response to an infection take longer than the secondary response?
3
How specific is the adaptive immune response?
6
Why don't phagocytes eliminate mutualistic foregin organisms residing in our body?
3
Where do the antibodies that trigger the specific immune response come from?
10
Why Can't The Immune Systems of Uncontacted Tribes Handle Our Common Colds?
3
Passing virus/diseases immunity to newborn
0
What is holding the immune system back to not attack human body cells?
3
Could there be a pathogen which does not activate an immune response?