In school they told us one of the functions of the ascending neural pathways is to filter unimportant information. But the neural signal I know, is only a chemical-electrical chain of neurons. Is this filtering of unimportant information reminiscent of the gradual attenuation of the signal during the travel from the periphery all the way up to the brain? If so, how does that work?

A neuron cannot know the importance of a signal in any applied sense, that is, it can't know the difference between one triggered by a feather or one by a hammer... on an individual basis. 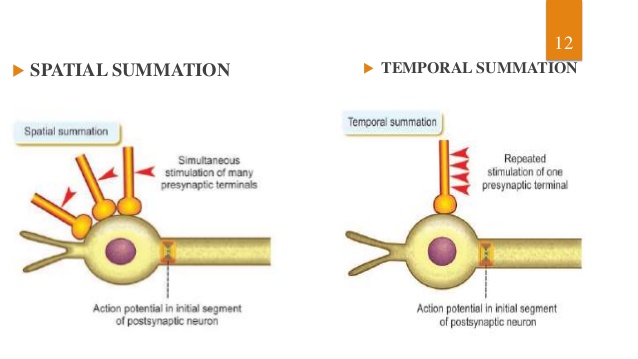 These filtering events occur at the synapses, so how would a neuron filter a signal as it was passing through it? As far as I know, it doesn't!

NOTE: As noted by @WSYWYG, LTP and LTD are also important, they stand for Long Term Potentiation and Depression. These are names given to the long term increase or decrease in sensitivity of a synapse, that is a neuron can become more or less likely to pass on a signal over long periods of time due to the pattern or frequency of signals it receives. Googling the terms will lead you to a wealth of vastly more detailed information on these topics.

EDIT: As an addendum, your body can inhibit neurons selectively, so as a wild stab in the dark, it may be interesting to see if ignoring a sensation from part of your body is the direct result of of external inhibiting (filtering) of signals incoming from ascending neural pathways... but don't trust me on that!

Short answer
The thalamus is the most important neural station for the filtering of peripheral information to the cerebral cortex.

Background
Sleep is a prime example of where much, if not all, of the peripheral input ascending to the brain is filtered out. The thalamus situated in the brain stem is the major gateway for the flow of information toward the cerebral cortex and is the first station at which incoming signals can be blocked by synaptic inhibition. This mechanism contributes to the shift that the brain undergoes as it changes from an aroused state, open to signals from the outside world, to the closed state of sleep (Steriade et al., 1993).

One way in which the thalamus does this is by generating slow-wave oscillations, so characteristic of the delta waves observed in slow-wave sleep. These slow waves are apparent in the cortical electroencephalogram (EEG) as well as in the thalamus. The slow oscillations are generated by intrinsic oscillations, probably by thalamic cells, and effectively block incoming information to be shunted to the cortex through thalamo-cortical connections. A similar mechanism underlies sleep spindles, also associated with thalamic unresponsiveness to gate information to the cortex (Fig. 1). (Steriade et al., 1993). 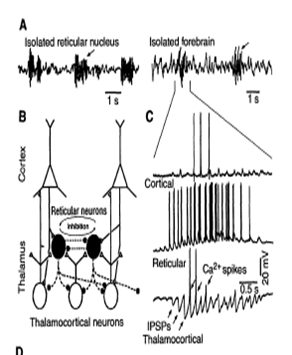 Filtering of sensory information in the wake state is also performed by the RTN in the thalamus. Selective filtering can occur through a top-down process. For example, when watching a movie, the cortex tells the reticular nucleus in the brain stem to filter other irrelevant input (other folks in the cinema, sounds of popcorn etc.).

Not the answer you're looking for? Browse other questions tagged brain neurophysiology information brain-stem or ask your own question.

9
Why has evolution made neurons use spiking?
8
What does pain look like in wave form?
10
Does the nervous system have “routers”?
3
Biological implementation of convolutional neural networks
1
Do individual neurons communicate with the origin of thoughts?
1
Do nerves work as I think they work and what does that mean for our senses?
1
Are there any examples of information compression in nature?