If I insert a new gene with a yeast integrating plasmid and select with a drop out culture once, can I assume that the newly integrated gene will stay in the strain without putting selective pressure on it? (i.e. can i use normal liquid culture and plates after getting the yeast with the newly integrated strain?

It depends upon exactly what you have done.

The standard way of using a yeast intergrating plasmid (YIp) is for it to integrate into the genome by recombination between a piece of yeast DNA that the YIp carries and the same DNA in the genome. This is often, but not necessarily, the selectable marker. So for example a YIp carrying the URA3 gene as its only yeast DNA will integrate at the URA3 locus (probably mutant to allow selection for Ura+, so more correctly ura3).

If the YIp is linearised by cutting at a site within the URA3 marker this will direct insertion and will increase the transformation efficiency.

Once insertion has taken place, the configuration at the integration site is:

This is inherently unstable because a looping-out event can take place via recombination between the URA3/ura3 regions. So removing selection means that you run the risk of losing the insert. Furthermore, it is possible for looping out to occur leaving the URA3 allele behind instead of the ura3 allele. So you can lose the vector even when selection is maintained (but this will depend on the exact nature of the mutation).

the resulting transformant is now Ura+ because of the integrated URA3 plasmid, but some TRP1 DNA is now missing (the DNA that was excised when the plasmid was digested) so the strain is trp1. The appearance of this Trp- phenotype indicates that the transformation has probably occurred by the pathway described.

In this case the inserted plasmid is much more stable because those two remaining fragments of TRP1 DNA are not identical, so there is no possibility of looping out.

In summary, if your transformant has the insert carrying the "new gene" flanked by a repeating sequence then it is unstable, otherwise it is ok to remove selection. In the first case, if the new gene is at all deleterious then there will be a strong selective pressure in favour of cells which have lost the insert.

You can avoid using YIp plasmids altogether by integrating your new gene at any locus using long targetting primers, as shown in the Figure below.

Design primers to amplify your gene as usual, but synthesise them with 40 bp 5' extensions corresponding to two sequences at the extreme ends of the integration site (URA3 used here for illustration purposes). The resulting fragment can then be used in a transformation and will integrate at the URA3 site by homologous recombination, replacing the resident DNA. The advantage of using URA3 for this is that you can select for integrants as Ura- cells by resistance to fluoorotic acid (FOA). Although you can probably select directly for this, I have always co-transformed the fragment together with another selectable plasmid (LEU2, TRP1 etc., but not a CEN plasmid) Then your e.g. Leu+ transformants can be screened for those that have also become FOAR. This co-transformation happens at quite high frequency because the cells that do take up DNA take up a lot of it. Once you remove selection for the co-transforming plasmid it will soon get lost, leaving you with a clean non-reverting integrant.

It's been a while since I did this sort of thing - probably there are even smarter methods around now. 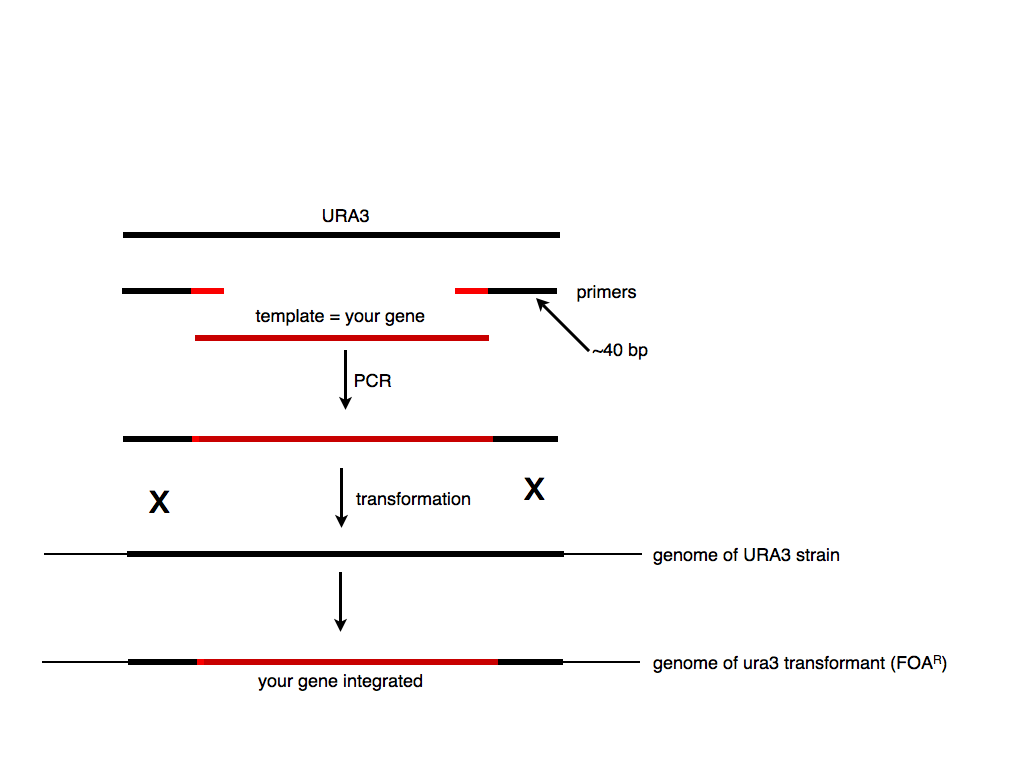 Yeast integrating plasmids are known to be stable, even in absence of a selective medium but can revert like most homologous recombination plasmids.

YIps are generally more stable than YRp or YEp plasmids. As a result it is safe to grow most YIp-bearing strains in rich media, although it is good practice to store them under selective conditions. The stability of YIp-bearing strains depends on the nature of the integration event. For example, if the YIp generates a tandem repeat upon integration into the genome, this can revert to wild-type by an intramolecular homologous recombination event.

-> hence use markers regularly and frequently.

Not the answer you're looking for? Browse other questions tagged molecular-biology yeast or ask your own question.

6
Auxotrophic complementation test with yeast
2
Yeast absorption of different spectra of light
4
E. coli not growing in liquid medium
2
qPCR : Cross-contamination while sealing plate
2
Gene cluster of interest not being amplified in PCR
4
Selection marker for a cytoplasmic vector that works at low expression levels?