What is the “leaky valve” between the esophagus and stomach?

When someone talks about there being a "leaky valve" between the esophagus and the stomach, what is the exact biological structure they are talking about?

This would be a structure that, when malfunctioning, causes stomach acid to leak into the esophagus.

The structure is called the lower esophageal sphincter: 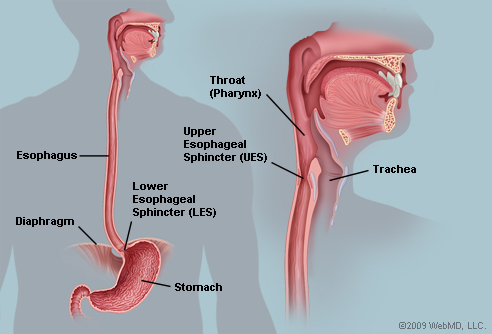 Basically, its function is to prevent the contents of the stomach, including stomach acid, from "backwashing" into the esophagus. The stomach is protected from acid by a protective layer of mucus, while the esophagus is not, so any number of medical issues which cause problems with this sphincter may lead to erosion in the esophagus, which is quite painful and can lead to serious long-term consequences if not addressed.

Not the answer you're looking for? Browse other questions tagged human-anatomy stomach or ask your own question.

4
what are the mechanics of sweating?
5
What neuro-motor diseases cause the lower esophageal sphincter (LES) to malfunction?
2
What is the difference between “hamstring tendon” and “common hamstring tendon”?
8
How does the stomach handle continuous eating?
2
Can stomach acid destroy a virus?