What neuro-motor diseases cause the lower esophageal sphincter (LES) to malfunction?

Please note: This question is neither homework nor seeking medical advice. I'm simply asking for a factual, objective, biological explanation of the various neuro-motor diseases/illnesses that can act as the underlying cause to LES malfunction.

The primary function of the lower esophageal sphincter (LES) is to prevent stomach acid from backwashing into the esophagus. This sphincter is an involuntary muscle, and so, for it to malfunction (unable to fully or properly close), it must be the result of an underlying neuro-motor (autonomic) disease or condition.

What such condition attacks this sphincter/valve, thereby causing it to malfunction and not operate properly? How exactly does this condition effect the sphincter biologically/neurologically?

Looks like the Vagus Nerve (10th Cranial) innervates this sphincter, so I guess the question is: What neuro-motor diseases attack the Vagus Nerve or cause it to malfunction?

This is called achalasia. According to UpToDate, the mechanism for this diseases are generally unknown. What is known, however, is that the esophagus has a neural system called the myenteric plexus and if these ganglion cells in the esophagus are damaged in any way (e.g. physically, followed by Wallerian degeneration, or the primary process of degeneration after physical damaging of neurons), it can lead to lower esophageal dysfunction as these neurons regulate the inhibition of the contraction of this sphincter muscle. Dysinhibition leads to a closed sphincter.

Yes, you are right in that the vagus nerve is the primary route of the myenteric plexus to the central nervous system, so damage here might result in dysfunction as well.

Histological studies have reported fewer myenteric neurons in people with achalasia, and inflammatory cells in the region, perhaps suggesting infection or autoimmune etiology 1.

Additionally, from the UpToDate article, Chagas Disease has been associated with this disease. Chagas disease is a parasitic disease caused by the species Tropanosoma Cruzi, and these parasites multiply within cells, causing them to burst.

Check out pathophysiology of achalasia on websites such as UpToDate.

I answered the opposite, but the principles still apply. Here is a wonderful resource on this topic ("Physiology of esophageal motility," http://www.nature.com/gimo/contents/pt1/full/gimo3.html. It includes a diagram showing the vagal neural pathway and the main neurotransmitters responsible for each action (relaxation and contraction). 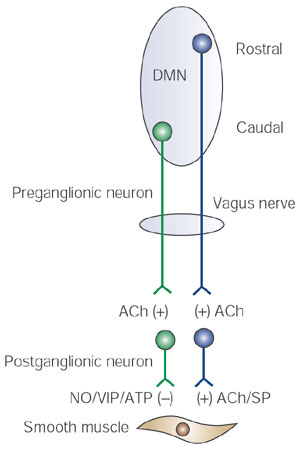 Not the answer you're looking for? Browse other questions tagged human-anatomy muscles neurology gastroenterology autonomic-nervous-system or ask your own question.