The question is all in the title.

I like phở soup. I have noticed that I get restless after eating the phở soup at some restaurants. The effects are similar to the ones resulting from caffeine intake. (Ingesting a cup of Turkish coffee or a couple of espressos results in my hands shaking badly.)

The phở soups which I think trigger the reaction appear to be the most savory ones. Given that:

I thought there was possibly a connection. (Or perhaps not. Or perhaps it's the intake of MSG together with the consumption of an herb containing caffeine or another psychoactive drug. Phở contains herbs in large quantities.)

I found this paper which states the effects of caffeine result from an increase of glutamic acid (GA) in the posterior hypothalamus which in turns triggers wakefulness.

There is no strong evidence for MSG having any kind of neurotoxic/neuromodulatory effect.

However, A 2010 article says that, in a double blind trial, it was found that the people who consumed MSG containing soda, reported headache in significantly more numbers compared to the placebo subjects [1]. The concentration of MSG used in this study was 75-150 mg/kg. Assuming that one serving of soda would be 300ml i.e 300g, the amount of MSG consumed would be maximally 45mg, which is much less than glutamate concentration in some natural food stuffs such as tomatoes (~2000mg/kg [2,3]; a tomato that weighs 6oz/~170g contains ~340mg of glutamate). Therefore, I would doubt the findings of this article. The results could have possibly been observed because of some hidden dependent variable (such as the soda formulation).

In general, the USFDA considers MSG as GRAS (generally regarded as safe) [4].

Finally, a 2014 article concludes that dietary MSG would not lead to increase in either blood or brain levels of glutamate [5].

The sodium salt of glutamate (monosodium glutamate; MSG) imparts a savory/meaty taste to foods, and has been used as a flavoring agent for millennia. Past research on MSG/glutamate has evaluated its physiologic, metabolic and behavioral actions, and its safety. Ingested MSG has been found to be safe, and to produce no remarkable effects, except on taste. However, some recent epidemiologic and animal studies have associated MSG use with obesity and aberrations in fat metabolism. Reported effects are usually attributed to direct actions of ingested MSG in brain. As these observations conflict with past MSG research findings, a symposium was convened at the 13th International Congress on Amino Acids, Peptides and Proteins to discuss them. The principal conclusions were: (1) the proposed link between MSG intake and weight gain is likely explained by co-varying environmental factors (e.g., diet, physical activity) linked to the "nutrition transition" in developing Asian countries. (2) Controlled intervention studies adding MSG to the diet of animals and humans show no effect on body weight. (3) Hypotheses positing dietary MSG effects on body weight involve results from rodent MSG injection studies that link MSG to actions in brain not applicable to MSG ingestion studies. The fundamental reason is that glutamate is metabolically compartmentalized in the body, and generally does not passively cross biologic membranes. Hence, almost no ingested glutamate/MSG passes from gut into blood, and essentially none transits placenta from maternal to fetal circulation, or crosses the blood-brain barrier. Dietary MSG, therefore, does not gain access to brain. Overall, it appears that normal dietary MSG use is unlikely to influence energy intake, body weight or fat metabolism.

Short answer
Glutamate cannot enter the brain due to the blood-brain-barrier.

Background
You are totally right that glutamate represents the principal excitatory neurotransmitter in the brain (Meldrum, 2000). However, glutamate is a regular amino acid and will be metabolized quickly. More importantly, the blood-brain barrier is extremely effective in keeping polar (hydrophylic) molecules out, and therefore especially ions are not coming through as they are extremely hydrophilic. The blood-brain-barrier is formed by the endothelium lining the blood capillaries in the brain. In the brain, the endothelial cells are coupled through tight-junctions, that effectively keep almost everything out of the brain. The only molecules that can get through are either actively absorbed through specialized channels (glucose transporters for example) or are lipophilic. Glutamate under physiological pH carries two negative charges and a positive charge (Fig. 1), and will hence never make it through the blood-brain-barrier. There are glutamate transporters in the endothelial cells, but these in fact transport glutamate out of the brain, rather than in (Hawkins, 2009). 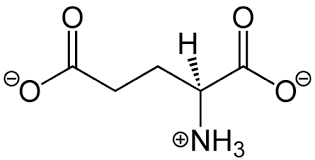 Not the answer you're looking for? Browse other questions tagged neuroscience brain food neurotransmitter or ask your own question.

6
Do omnivore mammals vary food preferences based on dietary needs?
3
Membrane potential after exposure to glutamate
8
Can rapid eye blinking induce epileptic seizures?
3
How can TMS induce enough depolarization to cause an action potential?
2
Do both Carbamazepinum and Lamotriginum increase glutamate threshold?
11
Can we change our dopamine baseline levels?
6
Can low temperatures induce a withdrawal reflex?