Why is chemotherapy-related hair loss temporary?

Chemotherapy kills cancer cells by targeting rapidly growing cells. That is why patients lose hair as well. Why is chemotherapy-related hair loss temporary?

Its less that the cells repair themselves and more that the tissue can repair itself. Rapidly dividing tissues have reservoirs of stem cells waiting to replace the cells that are rapidly lost. For instance, histologically, there are stem cells just waiting at the hair follicles and intestinal lining, waiting to replace the old cells that rapidly die off. But those are killed off during chemo.

Stem cells at the follicles: 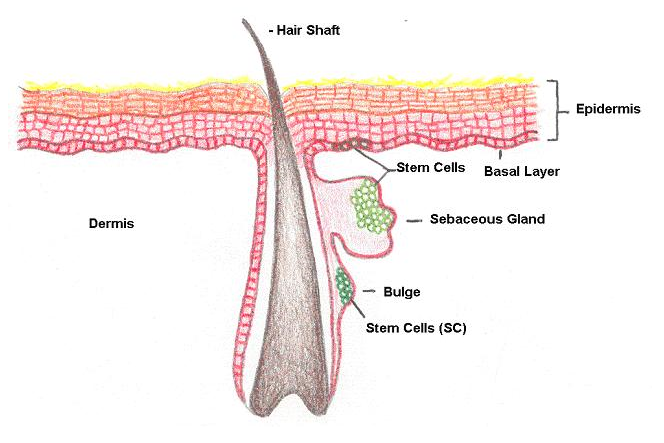 Most chemotherapy drugs targets DNA replication in some way, which damages not only cancer cells but normal replicating cells as well. But normal cells are typically more resistant, and stand a better chance of survival. It is thought that this is because normal cells respond to DNA damage by "arresting" the cell cycle, and not dividing until the damage can be repaired. Cancer cells, in contrast, have lost these safety mechanisms, and will continue to divide despite having damaged DNA, which can cause serious problems and lead to cell death. This difference is exploited in chemotherapy.

There are of course large variations between individual cells. Some normal cells will die of chemotherapy, and some cancer cells will survive. But statistically, normal cells stand a better chance, and so chemotherapy dosage can be adjusted to a level where the drug effectively kills most cancer cells, but spares at least some normal cells. (Provided the cancer is sensitive to the particular drug used, of course; in many cases this strategy unfortunately does not work.)

After a course of chemotherapy, many normal proliferating cells will also be damaged, causing problems like hair loss and other unpleasant side effects. But given some time, normal cells will recover and repopulate hair follicles and other tissues.

Not the answer you're looking for? Browse other questions tagged cancer pharmacology hair or ask your own question.

4
Classify chemotherapy drugs?
5
Expression/Mechanism of ROR1 in healthy tissue
6
Why do epithelial cells arrest in response to serum?
1
Do antioxidants interfere with chemotherapy?
4
The onset of hair loss in men
3
Why do men have a greater chance of suffering from hair loss?
8
Why might long telomeres be selected for in laboratory mice?