Do male mammals other than humans have nipples?

When I grew rabbits, I had a pair, one male and one female. And while the female's nipples were quite prominent, especially after giving birth, I don't remember the male having any nipples at all.

Do males of other mammal species, have nipples like human males, or is it a trait that's unique to Humans?

Most mammalian males have nipples. The duck-billed platypus does not have nipples but you begin to see development of nipples in marsupials (Park and Lindberg 2004) like the opossum and kangaroo. Development of a complete nipple begins in the eutherian (placental) mammals.

The mammary glands develop early in the embryo along a pair of ridges called the mammary ridge, mammary lines, or milk line (shown in an adult human in the figure below, taken from Wikipedia). The nipples form along this line. In humans, this happens during the fifth week of development. Within a few days, nipples begin to form. The number of nipples pairs that form is characteristic of the species (e.g., 1 pair in humans to 9 pairs in pigs). The development of nipples occurs before sexual differentiation begins which, in humans, is during the sixth week of development. That's why both males and females have nipples. This same order of develop occurs in other mammals, revealing our common ancestry. 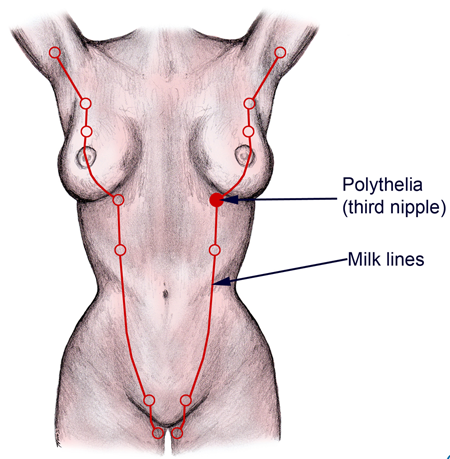 However, because the process is under genetic control, mistakes can happen. Occasionally, humans (and other mammals) can develop extra nipples, the so-called supernumerary nipple(s). The most common places that humans develop one or more supernumerary nipples are identified by the circles in the figure above. The actor Mark Wahlberg is not shy about showing his. 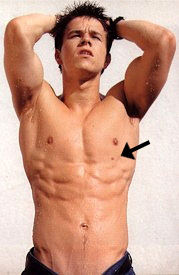 At the very least, I know that male primates also have nipples like female, though they are very close relatives to human. On the other hand, in some of my dissection labs, I noticed that male pigs also have nipples just like the female ones. It seems to be the case that most male mammals have nipples, which probably has to do with mammals being breast-feeder and their developmental pattern.

There is a page on Wikipedia that I found about this topic: http://en.wikipedia.org/wiki/Nipple#In_male_mammals

Not the answer you're looking for? Browse other questions tagged anatomy mammals or ask your own question.

11
Why are there nail growth differences between humans and other mammals?
13
What hair do aquatic mammals have?
9
Why do most mammals have long snouts?
7
Why does botulinum toxin seem to be more dangerous to humans than to other mammals?
61
Why don't mammals have more than 4 limbs?
22
Evolutionarily, why do male rats and horses lack nipples?
7
Do male humans have a mons pubis?
4
How are the first mammary glands thought to have functioned?
1
Do male skunks have teats?
1
Why do mammals rarely have eyespots?