How does Cro protein expressed by lambda phage kill its host?

I read that the DNA segment of lambda phage integrated in host DNA could switch between lysogenic state where cI represses the expression of Cro and lytic state where Cro expression takes over and self produces more.

Have a look at the wikipedia page on lambda-phage (it is nicely illustrated and referenced).

See this map of the lambda-phage genome (Source). 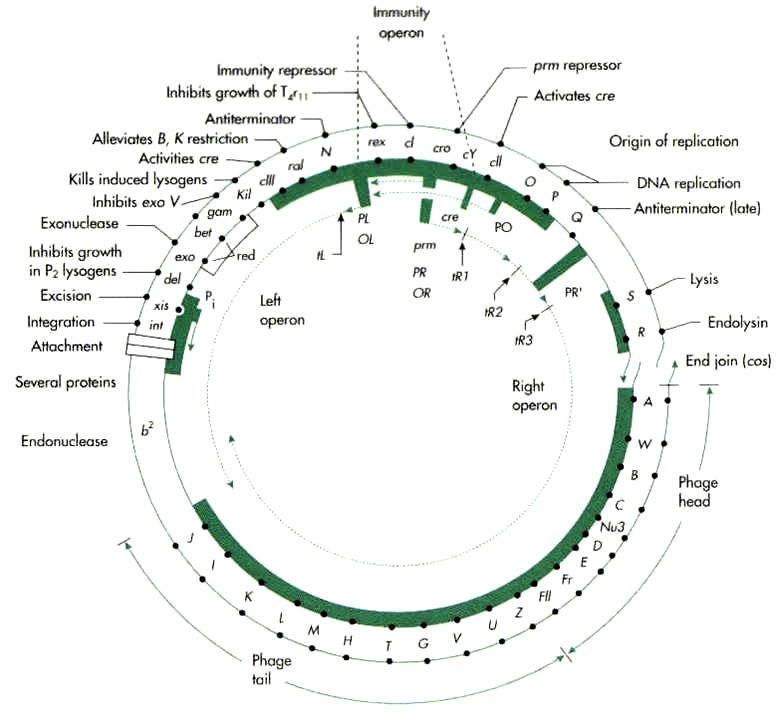 After infection of the bacterial host, but before initiation of DNA replication of the viral genome, the phage has to decide between two mutually exclusive fates:

This explanation is a bit simplified; there are other players that influence how the switch gets "thrown."

In a lysogen, just about the only phage protein being made is the cI repressor, and it keeps all the early genes shut off.

Not the answer you're looking for? Browse other questions tagged genetics molecular-biology cell-biology microbiology molecular-genetics or ask your own question.

38
How does a cell sense its size?
7
How can CI repressor both activate and repress $P_{RM}$ promoter found in $\lambda$ phage?
3
What does the gene name “lexA” stand for?
3
How does a protein reach its substrate within the cell?
4
Do DNA viruses have their own DNA dependant DNA polymerase?
2
How does a cell regulate what leaves its vacuole?
1
How does an antisense RNA molecule restore protein function in CF patients?