Does the human body convert water?

I just read Andy Weir's "The Martian" (which was very good) and one line made me wonder:

Is that true? Does all water "that goes in, go out"?

Out of the hundreds of chemical reactions going on in the human body, there are reactions which take water as an input and "react it away" into something else. There are also reactions which create water out of other molecules.

Example 1: Hydrolase reactions. They have the form of

You get water as input, and something else as output.

Beside these reaction, there is also a lot of water which doesn't react and is simply excreted after having served its purpose. So, while some water is "converted", some other part "passes through".

The reactions are balanced in such a way that normally, you excrete the same amount of water as you drink, as explained in Amory's answer. But despite this balance of the amount, you cannot claim that the water just passes the body unchanged. Some molecules of it are used up, and others are created de novo.

Yes, essentially, but in practice you need to consider the context of the novel.[1]

Your body needs water every day - somewhere around 3 liters is sufficient for baseline activity - in order to maintain balance due to obligatory losses. Here's a figure that sums it up (it has a few errors, see below): 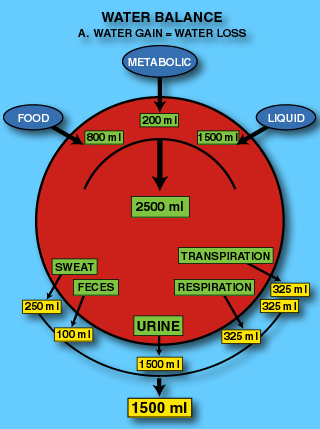 That whole online textbook chapter might be of interest, but that figure has a few errors. If you look, the numbers at the bottom for output aren't summed up correctly, and the value for transpiration is repeated. Doing the math on the correct numbers gives 2500 ml output for the 2500 ml input.

So yes, input and output are roughly equivalent. You and I need new sources of water every day since our urine isn't something we'd like to drink, but Watney has a "water reclaimer" and lives in a sealed environment[2]; his entire world is one small, well-balanced water cycle.

[1]: For the uninitiated, "The Martian" is a novel and soon-to-be-movie about Mark Watney, an astronaut stranded on Mars who must use his ingenuity to survive as long as he can. The context of that quote is the need for hydrogen, which Watney will get by hydrolyzing his urine.

Not the answer you're looking for? Browse other questions tagged human-biology nutrition or ask your own question.

18
Has there ever been an attempt to create nutritionally tailored food for adult human consumption?
4
Human body power consumption in still state
0
How much of the human body is processed sunlight?
5
Are there human-ingestible liquids that do not contain water?
0
Do organs or any structure in the human body shrink/shorten if it's function is no longer useful?
1
How does our body produce new antibodies?
1
What happens to the human ear as it naturally goes deaf?
0
What causes the human body to “jump” when we get a shock?
4
How does the human body extract energy from ethanol?