What gives things their colour?

My 6 year old daughter asked me 2 biology-related questions yesterday and I tried my best to answer them with the aid of YouTube videos. One of the questions (I may post the other one too) was

How do we see colour?

I showed her a video on YouTube where it was explained that light hits an object and if that object is a tangerine then that object will absorb all colours except orange and will reflect orange and that's why we see it as being orange. I then repeated this explanation and she said.

But how do we see different colours?

I then showed her a video describing corneas, vitreous humours, lenses, optical nerves and so on. I think I lost her. I got a bit lost too.

Now I have two problems, which I'd like to ask to you all as questions

I do not know how to explain to a 6 year old how we are able to perceive colour. Does anyone know how this can be explained?

Well, depending on the depth you want to introduce her to, it can be difficult to explain to adults - much less children. You explained the basics well enough. Without going to the molecular mechanisms, here's a useful diagram:

Light will pass through the eye and Retina until it hits the Cones and Rods. That produces a reaction (which I'll address next) - which then causes signals to either resume or cease (Rods are, ironically, shut off by light - not turned on). These signals pass through Ganglion cells, through the Optic Nerve, and interpreted by the brain. When some cells are switched on, like a 3-Way traffic stop, they will prevent the information from other cells being transmitted.

A simple way of explaining it might be that inside our eyes are millions of teeny-tiny molecules that act like light-switches, and the brightness and color of light determine which of the "light-switches" are on or off.

If you want to go further into the actual mechanisms (or just have the background knowledge for future reference) the next diagram shows the mechanism itself (and the original in full-size since the one shown is squished if you prefer):

The big things to note above is the change from cis-Retinal to trans-Retinal which occurs after a Photon is absorbed. This causes signaling molecules to go a bit wild, open ion channels, and the depolarization of the membrane propagates the charge down the cell - much like a neuron.

I have never quite understood this idea that an object has a colour depending on the light that hits it. Okay, I understand that in low light objects have a different colour because there is a not much light hitting it and that different objects absorb different wavelengths of light and therefore appear as different colours.

Well, let me stop you here. Low-light is a different situation than colored-light. Let's get the basics down:

Photons can also be emitted when an electron moves to a lower-energy state. The Wavelength emitted by the electron is directly related to the difference between the High and Low energy states, as this diagram shows fairly well: 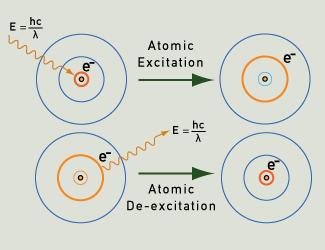 The emitted photons are the object's "Incandescence" - which is when an object produces a color of light by itself. The color you perceive is NOT going to change if the object emits incandescent light because the object is generating its own light. Neon signs are a great example: The gases being subjected to a current emit light, and will appear whatever color it's supposed to be whether or not it's a blue moon or sunset.

Photons which are reflected and not emitted - i.e. almost everything that doesn't have a power source - as I said above, are then absorbed by our Cones and our brain interprets the signals to produce a color.

The reason why objects that reflect light can change color is because not all environmental light is the same. Red objects will appear Black under Blue light because Blue light doesn't contain Red Wavelengths - there's nothing to reflect, so the object absorbs all of the available Wavelengths - the very definition of Black!

A lot of our color perception depends on ambient light, and most of the time - thanks to the Sun - that is a full-spectrum white light. Which brings me to answer the last bit of your question:

What I don't understand is that if I place a bar of gold a bar of silver side by side in the same lighting conditions they do have different colours, so therefore there must be something inherent in these object that give them different colours. What is that something?

Yes, there definitely is something inherent in both objects. That is: Their electron configurations absorb different chunks of the spectrum, and accordingly reflect different chunks of the spectrum. Although that's still a bit simplistic, since metals have some unique properties that other Elements do not. Their electrons exist in more of an "ocean" than around central atoms, but that's a whole other question.

As a fun bit of Trivia to impress your daughter when she's old enough, it's always a fun fact to know that the color Yellow is completely constructed in your head.

The human eye only has Rho (Red), Gamma (Green), and Beta (Blue) color receptors which have the following absorption pattern (from photo.net): 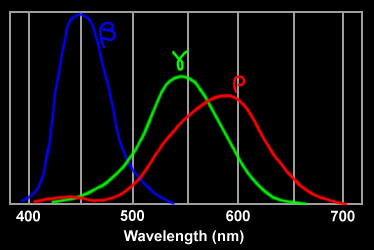 What everybody sees as "Yellow" is actually when both the Green and Red receptors are activated at the Wavelength where they intercept above, which your brain interprets as "Yellow":

Because your brain does a lot of processing, despite having only three color receptors we can perceive millions of colors (and shades/tones). Now for a while everywhere you look you'll be utterly amazed at what's going on, and you rightfully should be. ;-)

1
What gives observable light its colors?
14
Why can cones detect color but rods can't?
7
How is color information transmitted from the eye to the brain?
4
How can some animals see ultraviolet or infrared light?

5
Can other animals see black differently?
2
Seeing new colours with new photoreceptors
2
What photoreceptors are necessary to permit infrared vision?
5
Why did we lose our fourth type of cone cell (in the eye)?
2
Is chromatic aberration related to the spectral sensitivity of the human eye and can it cause "relative myopia" and "relative farsightedness"?
10
What do cats see when they look at 2D, still images?