This chap was strolling across my bathtub in Freetown, Sierra Leone, one day after very heavy rains and flash flooding. From its course, it appeared to have come up the bath plug from the drains. 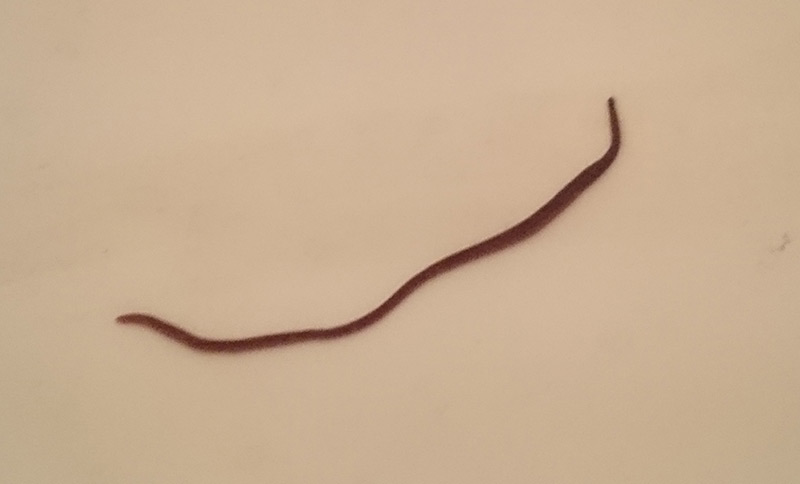 It's about 2mm-3mm wide at the fattest points and 1mm wide at the thinnest points (which vary as it moves). It's maybe around 10cm in length. The picture's not the clearest but (to the naked eye) it looked almost completely featureless - smooth (no visible rings), and no obvious hooks or features at either end.

It was moving to the right from the point of view of the photo, and moved by narrowing and elongating unmarked segments about 2-4cm long each rather than the whole body. I say segments, since it seemed to be the same sections each time, but when it wasn't moving there was nothing to distinguish these segments. Its movements began by elongating the very front 2-3cm, then it'd feel around, come down, and other (unmarked) segments in the body would expand and contract to bring the rest of the body after it.

While I'm pretty sure it's not either of the two most notoriously nasty West African parasitic worms (Loa Loa or Guinea Worm), I didn't want to to take any chances, and we had nothing to isolate or store it in, so we carefully squashed this one after taking photos then cleaned the plug hole with boiling water and cleaner.

On squashing it, it burst in a very similar way to a recently-fed mosquito or bed bug with a splatter of what looked exactly like regular human/mammal blood. I've not seen this before from a worm. Each 5mm or so of worm body contained about as much blood as a well-fed mosquito.

I've done a little browsing of species of bloodworm but didn't find any obvious matches.

This might be unrelated, but the bathroom in which this worm surfaced has for several weeks had a small but constantly replenishing population of tiny flies like this, which I never questioned because they look almost exactly like regular drain flies. There's usually 1-3 of these flies on any given day, even after wiping out all of yesterday's flies, and I've not seen them anywhere else in the country. In this image it's about 3mm from wingtip to wingtip - much smaller than the worm. 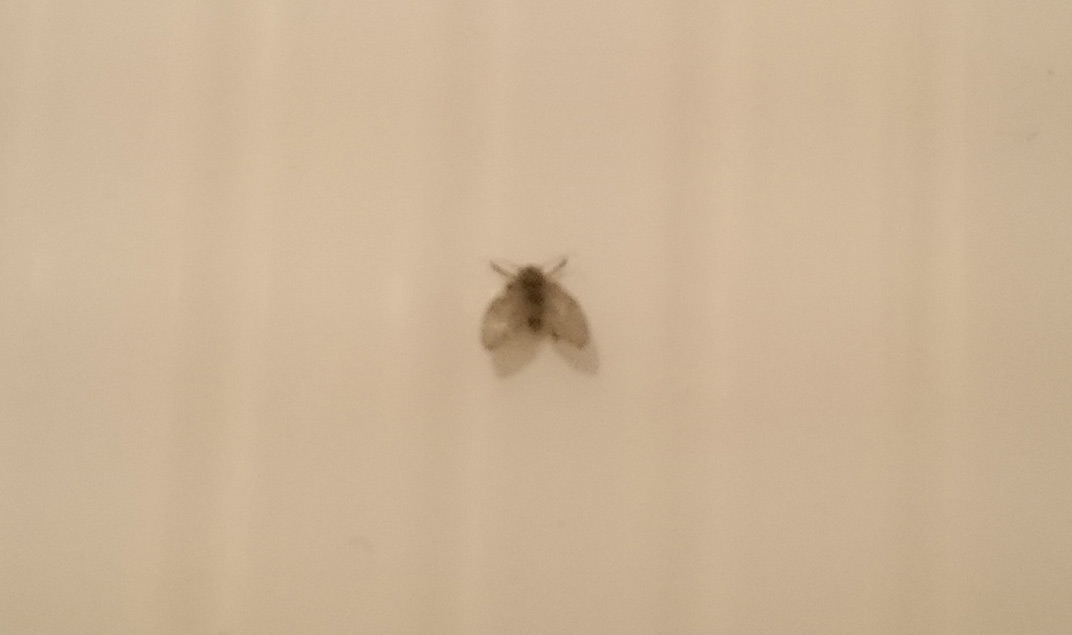 There are not so many potential candidate worm groups with similar appearance, namely: (free-living) flatworms, Nemertea and annelids.

While there are several terrestrial and freshwater flatworms, some of which are quite long, they do not approach such an elongated vermiform body shape and their mode of locomotion is different. There are around two freshwater nemerteans in Africa, neither of which looks like your worm, and in any case most nemerteans move by gliding using their cilia.

So the remaining group is Annelida. There are three groups of annelids relevant in this context: polychaetes, oligochaetes and leeches. Polychaeta are predominantly marine and normally have more or less pronounced parapodia ("limbs"). Some of the do behave according to your description, but they are very characteristic in their appearance and you would not expect to find them in a bathtub.

What remains are oligochaetes and leeches. Leeches are more or less dorso-ventrally flattened and have very prominent suckers. Moreover a fed leech (from which you would expect large quantities of blood) would look swelled (the gut in leeches has diverticula).

So, the only worm group I can reasonably suggest is oligochetes. In fact your worm looks and behaves very much like a common earthworm. It is very typical of them to be highly mobile during and after rains and their blood pigment is hemoglobin (i.e. red). The only contradiction is that your worm had no clear true segmentation, but I believe, in some forms it is easy to overlook it.

The fly is indeed some species of Psychodidae.

2
Which kind of tick is this and what is that thing around its back?
9
Bee (?) identification
18
Help identify this worm-like thing
7
Is this a saltwater millipede?
7
Help in identifying an unknown arthropod
5
What flying insect is this? Resembles Wasp / Crane Fly / Moth?
3
Is this a large bee? (species identification)
6
What is this giant mosquito-like insect?
4
What animal is this track from?