Role of drift in evolution of sexually dimorphic traits

Is there a model for predicting how drift can affect the evolution of a sexually dimorphic (SD) trait? I've been trying wrap my mind around this paradoxical question; sexually dimorphic traits evolve due to sex-specific selection. So how can drift affect SD traits?

Edit: I've added the equation from Lande 1980, which models the phenotypic response for sexually dimorphic traits. I'm wondering how aspects of drift (Ne and fixation probabilities) can be merged with an equation such as this. From my understanding drift may affect the G, B and P matrices (that is the Genotype variance covariance, intersex (B) variance covariance and Phenotype matrices. One of the assumptions of this equation is that these matrices remain constant.

There are many ways to consider the effect of genetic drift. Here is one: One can approximate the probability of fixation of new mutations (using diffusion equations) with

, where $s$ is the selection coefficient and $N$ is the populations size. As you can see, a larger population size (the lowest is the genetic drift) corresponds to a higher probability of fixation of a beneficial mutation (to reach frequency of 1 in the population). If you don't have a good intuition of why genetic drift is inversely proportional to the population size, please have a look at this post. The most important point to keep in mind about the effect of drift is that when drift is high, every mutation pretty much behaves like neutral mutations.

This approximation is accurate under some assumption, for instance that the population is panmictic (=random mating). This equation holds true regardless of the reasons why a mutation affects fitness. The mutation may affect the activity level of an enzyme or it may influence how attractive an individual is to the other sex. So yes, in any case, a beneficial mutation may fix although it is deleterious (because of drift), or it may not fix although it is beneficial (because of drift).

A mutation might be beneficial in both sexes, detrimental in both sexes or beneficial in one sex and not in the other. In such cases, I suppose it is possible that the above equation must take a slightly different form. In any case where the mutation has a different impact on the fitness in each gender, I don't know how the above formulation would solve to but I'd think that you could simply replace $s$, by $\frac{s_m+s_f}{2}$, that is the average of the effect in both sexes (where $s_m$ and $s_f$ are the selection coefficients in males and females respectively). Intuitively, I think this should hold true as long as the sex-ratio is 1:1. The exact calculation of the probability of fixation doesn't matter to your question though. Note that mutations having the opposite effect on fitness in each gender often end up being on sexual chromosomes (if any) or at least being expressed in one sex but not in the other. In such case, a fixed mutation often end up being beneficial in one sex while neutral in the other. In any case, genetic drift will obviously affect the evolution of sexually dimorphic traits.

could you clarify "As you can see the highest is the population size (the lowest is the genetic drift),"?

The impact of genetic drift can be measured in terms of how it affects probability of fixation or how it affects the rate at which heterozygosity at a neutral site is lost. An intuitive explanation for why $N$ and genetic drift are inversely proportional can be found here.

Are you referring to the positive correlation with P fixation and Ne?

Yes. I could have referred to that as to something else though. Note that the correlation between $P$ ans $N_e$ is perfect ($r^2=1$) because $N_e$ is defined on the concept of genetic drift.

Let's WR (stands for Wright-Fisher) be a population of size $N_{WR}$ where mating is random and there is no variance in fitness.

Consider now the population A. Let's its size be $N$. A experiences a given level of genetic drift based on its mating system, population structure, variance in fitness, etc.. the effective population size $N_e$ of A is (by definition) the size of the WR population ($N_{WR}$) that experiences the exact same level of drift, that is the same probability of fixation for a new mutation and the same rate of heterozygosity lose at a neutral site.

The intersexual genetic correlation between the sexes will constrain evolution in the sexes if selective forces are distinct for the sexes. This degree of correlation can be represented as rMF for single traits (Lynch and Walsh 1998 chapter 24) or the B matrix when examining the relationship between multiple traits (Lande 1980).

Two recent papers by Connallon and Clark (1 and 2) outline their adaptation to Fisher’s geometric fitness model which to predict mutation affects on traits given distinct phenotype-fitness spaces for the 2 sexes. The mean phenotype of each sex is a certain distance and angle away from the fitness optima (this vector represents the magnitude and direction of directional selection). The angle of these vectors represent the difference in selective forces for male and female traits. The current phenotypes are moved along the landscape by the addition of novel genetic variation (mutations). Mutations shift the trajectory of the current phenotype towards the optima. As in the selection vectors, the difference between the mutation vectors is quantified by the angle between the sex specific vectors, and can either move both sexes towards their respective optima or move only one sex towards their optima (sexually antagonistic selection). 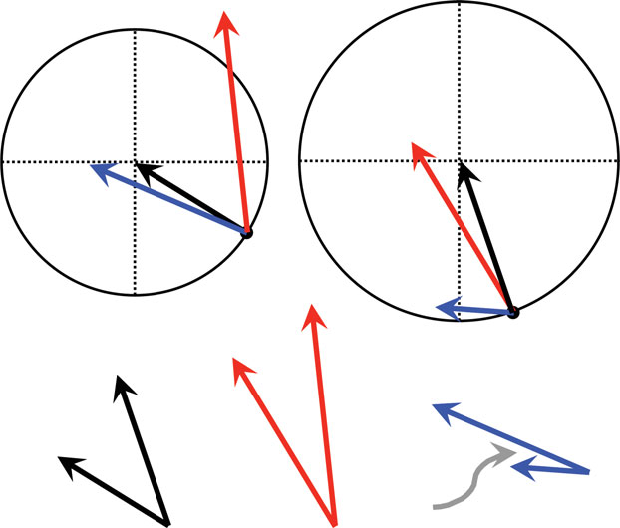 While this model doesn’t directly take into account Ne for predictions on drift, it does emphasize that distinct fitness landscapes eventually cause antagonistic selection due to decoupled fitness effects for female and male traits due to random mutations.

“Evolution of sexual antagonism occurs whether or not selection favors phenotypic divergence between the sexes.” 1

This wasn't a direct answer, but it provided insight into how selective forces and pleiotropy of traits can shape the evolution of SD.

7
Why is the strength of genetic drift inversely proportional to the population size?

3
How to interpret the breeders equation?
10
How does Natural Selection shape Genetic Variation?
4
How many traits can a multivariate breeders equation handle?
9
Genotype to phenotype map and the G-matrix
8
Basic Modelling in Quantitative Genetics
5
Sexually homologous traits
5
How do non-dimorphic birds distinguish sex of possible partners/rivals?
0
Does covariance and phenotypic variance have to be for the same trait to calculate narrow-sense heritability?
1
Why some traits are more desirable in the sexual selection?