I mean, humans have changed radically since we split from chimpanzees, we have Australopithecus afarensis, africanus, anamensis, Paranthropus robustus and boisei, Homo erectus, habillis and so on.

A chimpanzee fossil that is 2 millions years old should be pretty different from a modern one, why aren't they considered another species?

Otherwise Chimps exhibit far more genetic diversity than humans. humans are just a weird branch of chimp.consider the genetic diversity below. If we were not so morphologically biased we sould easily conclude all hominids as just one species based on genetics.Chimps actually have quite a wide morphological variation its just we as humans are far better at noticing human variation. 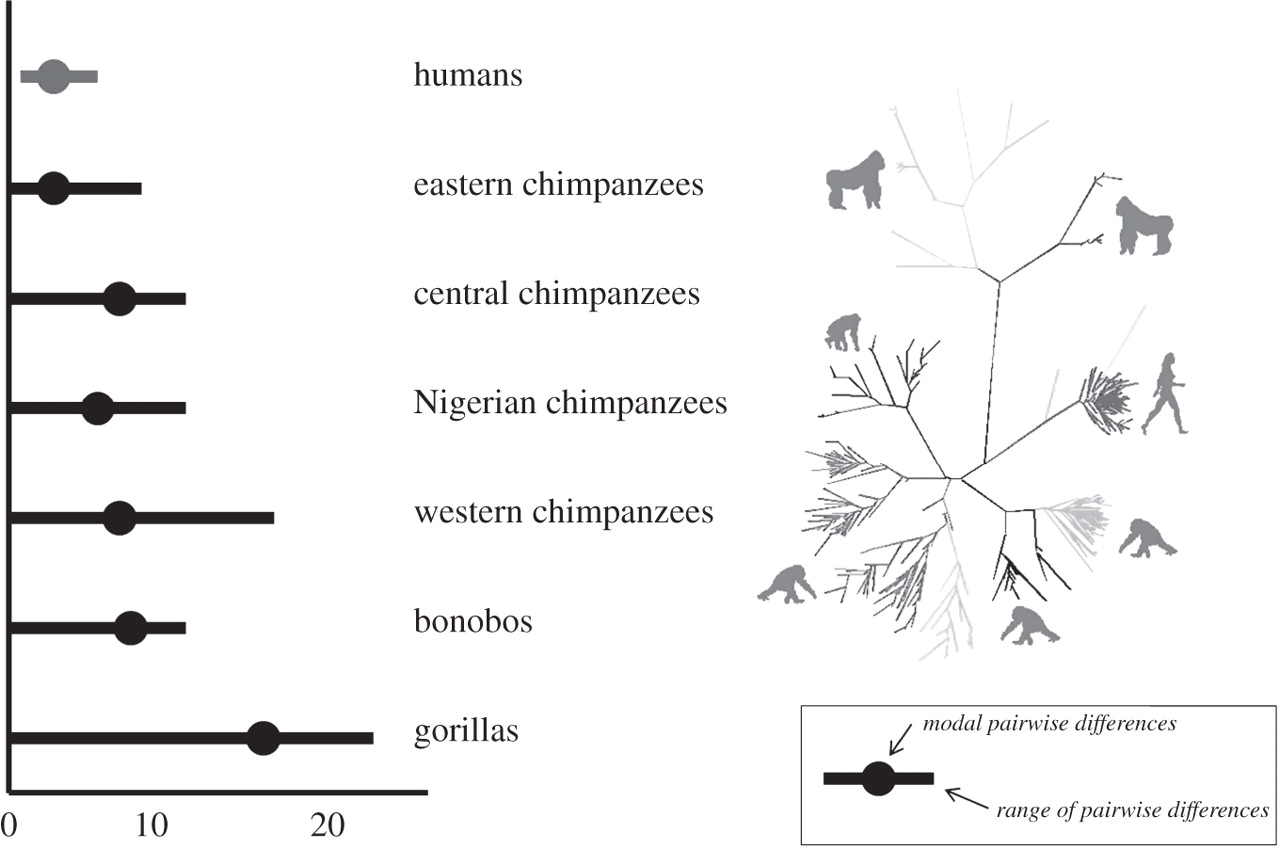 There is a huge behavioral gap between the two species. I get your point that the human lineage had several, not just two, forms. Yet these two chimpanzee species are so brutally different that they make most of our "human diversity" seem so regularly the same.

About your question - it seems obvious to me the point brought by @Pete: That we, humans, came from the forests to the open land, which brought the seas and continents to us. Many different habitats would lead to wider variation.

Why should it? The African Forests changed drastically in the last 2 million years? If not, then why should chimpanzees have changed? Take a look at the horseshoe crabs (Xiphosura, Limulidae): they've been that way for hundreds of millions of years! The punctuated equilibrium seems to be the norm, more than the exception, doesn't it? (I remember the horse evolution through the Mesozoic, apparently linear, but in a closer look there ain't some teeth in the line? Aren't there plateaus - long periods of stability - among the high precipices of sudden genetic/form/function change?

Chimpanzees are relatively isolated and confined in so far as their environment, it's all much the same... forest. They haven't been subject to the environmental factors humans have... arctic, tropics, deserts, mountains etc. Therefore there hasn't been the need to change as much. Animals adapt to their environments, chimpanzees only have one, humans have hundreds.

If you have a look at the humans living in the same distribution area as compared to chimpanzees then you'll see that they don't have much variation either for that area.

Not the answer you're looking for? Browse other questions tagged evolution human-evolution or ask your own question.

15
Could humans and chimpanzees hybridize?
11
Why are there so many medicinal plants?
6
Why do different humans look different?
4
Why are humans so variable in appearance
4
How many generations between the first lifeform and humans are there?
1
A missing endogenous retrovirus in humans, but present in gorillas and chimpanzees?
0
Did humans evolve the ability to swim? Or is it just luck that we are able to swim?