Is there a genetic reason explaining the difference of the height of male and female?

The male and female height difference seems to be around 1.08 if all cultures are counted from these stats: https://en.wikipedia.org/wiki/Human_height

Can this ratio, 27/25, be explained by genetics and is there any research to explain how genes affect the growth of a man and woman? I assume there are a lot of factors that affect height and it might be very difficult to say if environmental and selective reasons or genetics are behind this factor.

“Height is almost completely determined by genetics, but our earlier studies were only able to explain about 10 percent of this genetic influence.”

There is strong evidence that height is a heritable trait with a strong genetic component. The genetic mechanism could be higher expression of an X-chromosome gene that, expressed in high levels, inhibits cartilage development, perhaps causing lower height. The increased expression seems to be caused by incomplete X inactivation in females. Furthermore, there is differential selection for height between human males and females likely causing the differences we see in modern human populations.

The genetic variants analysed by Wood et al. (2014) account for ~29% of the phenotypic variance and 60% of the heritability of height.

Due to this high heritabilty (and the fact that there are still expected to be more unknown variants affecting height) there most likely is a genetic reason explaining the difference of height in human males and females. Thinking about the nature of this difference is a bit difficult. It is good to know that the trait has a high heritability and therefore a strong genetic component as this allows us to have a look at how natural selection affects height.

Height is a polygenic trait that is under recent and strong natural selection (Field et al., 2016 - preprint) leading to height increase in both human males and females (Fig. 3D in Field et al. (2016)): 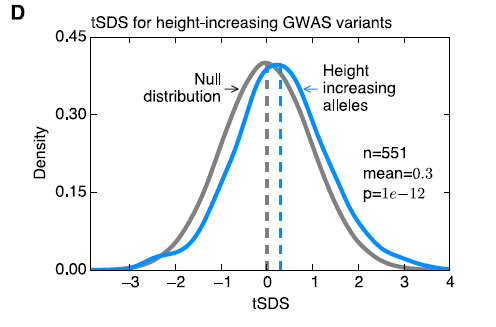 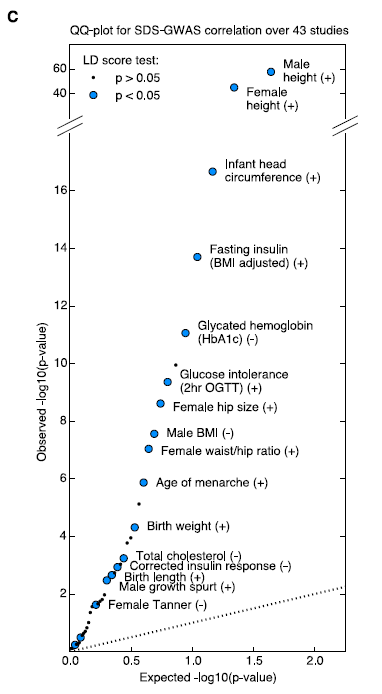 But selection needs heritable genetic variation that allows this differentiation between the sexes. So what is the mechanism?

Genetic mechanism of height differences between human males and females

As pointed out by @tsttst in the comment differences between sexes are usually caused by genes on the X and Y allosomes. There is evidence that the height differences between human males and females are related to the X-chromosome (which also explains some of the missing heritability of the GWAS study by Wood et al. (2014)), reported by Tukiainen et al. (2014). They write

In one of these three associated regions, the region near ITM2A, we observed that there is a sex difference in the genetic effects on height in a manner consistent with a lack of dosage compensation in this locus. Further supporting this observation, ITM2A has been shown to be among those chrX genes where the X chromosome inactivation is incomplete.

They also give a molecular mechanism how this hypothesised increased expression of ITM2A can cause the height difference. They report that the ITM2A gene is involved in cartilage development (van den Plas et al., 2004) and that the height-associated ITM2A variants change expression of the ITM2A protein. This is interesting as increased ITM2A expression in mesenchymal stem cells of adipose tissue seems to inhibit cartilage development (Boeuf et al., 2009). Tukiainen et al. (2014) conclude:

Finally, how can this be interpreted from an evolutionary point of view?

Evolutionary interpretation of height differences in human males and females

Differences in height (but also other traits) between sexes of a species are refered to as sexual dimorphisms. Sexual dimorphism (at least in primates) in height is strongly related to differences in mating behaviour and a sign of aggression and/or dominance-based mating patterns (Wynn and Coolidge (2011, p.82), sorry for that poor referenc link). The counterpart to this is pair-bonding, or in human terms marriage: a primate example is our pretty close relative, the Gibbon, that is (at least socially) monogamous and as expected does not have a height-related sexual dimorphism. Great apes including humans do have this polymorphism even though pair-bonding in humans is widely spread. Therefore, it was not surprising to find a reduction in height dimorphism from Australopithecus over Homo erectus to Homo sapiens (Wynn and Coolidge, 2011, p. 83, see also this, especially the last paragraph of this chapter).

Update on the main source

One of the papers I mainly used for this answer - to illustrate selection on height - was a preprint. It is now published in Science: Field et al. (2016).

8
Are males taller than females in humans?