How do we perceive acceleration?

I found this post but I didn't get any satisfactory answer from book referred in answer.

My question, Is it just visual perception or special mechanism for detection of acceleration?

Acceleration is a synthesized conclusion from a multitude of systems.

Most prominent is the Endolymph system you already mentioned: 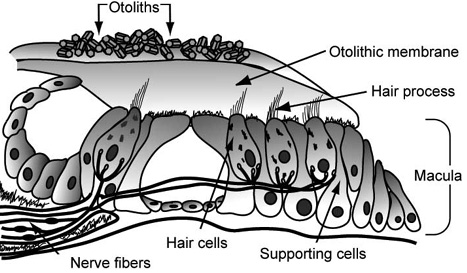 This is also where dizziness comes from, as the endolymph and otoliths do not come to rest at the same rate, momentarily giving the brain two different interpretations of what acceleration you're experiencing.

There is also the Doppler Effect:

Based in the cochlear system of the inner ear this time, instead of the vestibular system, the doppler effect is interpreted by the brain and gives a very rough interpretation of both velocity and acceleration (if the velocity of the object happens to be changing).

Then there is the entire visual side of things. Motion blur and the speed at which the perception of objects change size are large contributors to our sense of visual acceleration, but almost all of this is done via complex manipulation of visual data in the occipital and frontal lobes.

There are also countless minor contributors: skin and join tension (the sensation of weight due to acceleration), ease of breathing, sensory cells in your hair if your hair is exposed to the open air while acceleration, blood pressure sensors (and numbness when the body can't compensate), etc.

In any of these cases, why I was feeling more acceleration while siting opposite than in direction of acceleration?

My guess would be because your body is more visually attuned to facing the same direction as the acceleration, and when you were facing the opposing direction your mind overcompensated in an effort to protect you since you probably don't get a lot of opportunities to rapidly accelerate backwards over distances of more than a few feet.

Your brain might also have been panicking a bit because you couldn't see where you were going (usually very bad), and the heightened sensory state made the magnitude of the acceleration feel greater.

These are my best guesses, however. If someone has an academic source, please feel free to edit this answer!

Not the answer you're looking for? Browse other questions tagged vision perception or ask your own question.

14
How do we know the brain flips images projected on the retina back around?
5
Do male animals visually perceive females as more/less attractive?
11
Do humans perceive temperature or heat-flux? (or both?)
1
Is there an absolute minimum intensity level to the stimuli we can perceive?
15
Are some animals, like dogs and cats, color-blind and how do we know that?
12
What really is color and how do we perceive it?
2
How do we perceive weight?
1
Does the nature of nervous impulses give us a finite number of things we can perceive?
1
How do big cats perceive objects, specifically vehicles?