What happens after the purification step in Hi-C sequencing?

I am a statistician reading an article on Hi-C, and I am trying to better understand one of the steps in the DNA isolation and sequencing process.

Since I'm a statistician, please try to avoid too much jargon in your answers, and if you must use jargon, please define/explain it.


Specifically, I am confused about the isolation and shearing step. To explain myself, I will make reference to the following images, labeled 1 through 4. 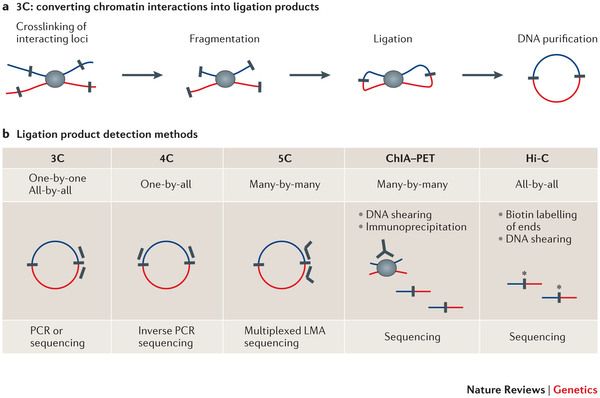 I understand that the DNA is cut up with restriction enzymes, producing a cloud of DNA fragments, some crosslinked and other not. When these pieces are attached with biotin and ligated in a dilute mixture, it is highly likely that these pieces will ligate with themselves, resulting in either; 1) a ring from strands that were NOT crosslinked (as in the third drawing in Image 3 marked "self-ligation"), or 2) figure-eights from strands that ARE crosslinked (as in the fourth drawing in Image 1).

Now, the following is what I find confusing:

Sorry, I know the above is a lot, but I want to understand the nature of the data before I analyze it. Thank you for your help.

So, after the restriction digestion, the sample consists of DNA fragments with 5' overhangs. These are filled in by Klenow DNA polymerase, adding biotin-dCTP to both ends of each fragment. Then the fragments are ligated under conditions (ie low DNA concentration) such that ligation between non-crosslinked DNA is less likely. This reduced ligation efficiency (which is already lessened by the use of blunt end fragments) means that all crosslinked fragments may not be ligated, which I imagine is what they are showing in Image 2. Any two molecules which become joined by this reaction are called ligation products (ie they are the products of the ligation reaction).

After this step, the sample is treated with T4 DNA polymerase which, as well as having polymerase activity (obviously), also has 3'->5' exonuclease activity. Thus, any free DNA ends which have not been ligated will be trimmed, removing the biotin. After this step, biotin will mostly be present at ligation junctions, and these molecules can be selectively pulled down by the beads. I say mostly because some of these so-called dangling ends will still retain biotin, but these can be distinguished during mapping (see image below).

As for self circles: because they have been ligated, they will contain biotin and be pulled down with the crosslinked DNA. However, since this DNA is from the same genomic locus, they can also be distinguished from valid interacting pairs during mapping: 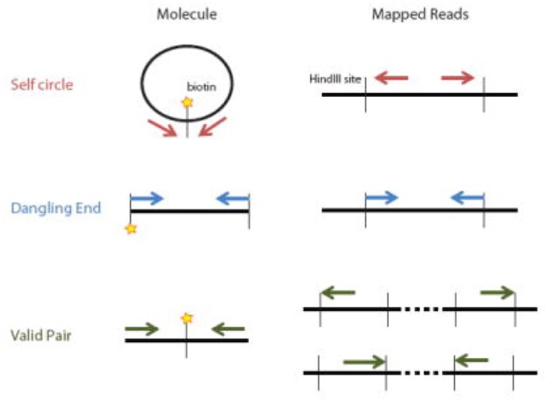 Finally, a quick note on the pull-down mechanism. The beads are coated with a protein called streptavidin (or avidin), which just binds to biotin very tightly. Only one biotin need be attached to any molecule (such as DNA) for it to be captured.