Does this recording sound like the pulses emitted by bats?

Out of curiosity, I recorded sounds in an area with lots of bats, hoping to be able to "hear" the bats communicating by lowering the ultrasound to a level down to the frequency which can be heard by a human.

After a bit of post-processing, I actually hear interesting sounds, but I'm not sure about the origin. It seems that the frequency of the pulses is too low compared to bats.

Are those actual sounds emitted by bats? If not, what other animal could be the source of those sounds?

The sound was recorded at 10 p.m. at 46°34'32.0"N, 0°20'45.4"E near a river, with more of a dozen bats flying in this zone. There is a bridge nearby, and the sides of the river are flat concrete, which means that there are a lot of opportunity for sound reflection (although high frequency sounds don't reflect well).

Zoom H5 with the default XY directional microphone was used. The bitrate was set to 24-bit. Unfortunately, I used the sampling frequency of 48 kHz instead of the maximum 96 kHz.

The following transformations were made to the original audio: 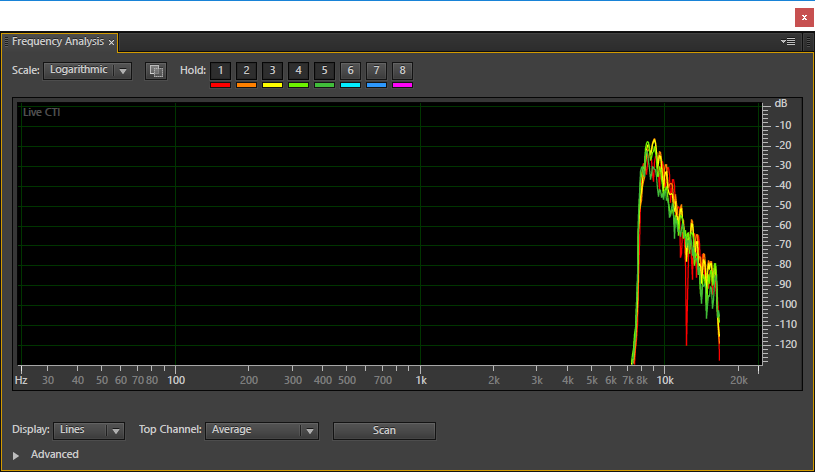 hypertextbook contains many sources with different indications about the frequency range of the sounds emitted by bats, only a few referencing the frequencies low enough to be heard by a human:

while most agreeing on the fact that bats use frequencies higher than 20 kHz.

The observed range of 18..32 kHz seems too low compared to the sources, but I have an impression that the frequencies vary a lot between different species of bats.

When viewing the audio track (see below), each cry consists of several pulses in two to three sub-groups which are in turn in two groups. Each peak is a bit less than 1 ms. The second group occurs from 40 to 200 ms. after the end of the first one. Each sub-group is separated by 5 to 10 ms.

The frequency of every pulse doesn't vary, except the very first pulse. The first cry starts by a more quiet pulse at 6 kHz (12 kHz in the original audio). The second and third cries don't follow this pattern.

Hyperphysics indicates that there are three categories of sounds emitted by the bats:

It looks like it's still the third category which we are observing here, and the overall pattern looks similar to the one described for the bats.

The gap between the left and the right track is mostly irrelevant: at higher frequencies, microphones become more and more directional, and the sound is reflected less, which leads to such difference.

Note: this question was considered to be on-topic at Biology.SE on Meta.

Though I cannot be 100% sure from the sound quality, it certainly does sound/seem like bats are making the calls you are hearing/seeing. I spent a number of years as a bat bioacoustics researcher and I came across similar sounds frequently and was able to confirm they came from foraging bats.

I'll have to see if I can find any old spectrograms or recordings on an old data hard drive. If I can find clear examples similar to yours I will add them to my answer. (Though I haven't seen that hard drive in years, so don't get your hopes up!).

These sounds can likely be explained by one of the following:

You can see and hear examples of some social calls (used broadly in this case) for a pipistrelle bat in Britain here.

I copy a spectrogram of one of these social calls from the above link (see the middle call signature): 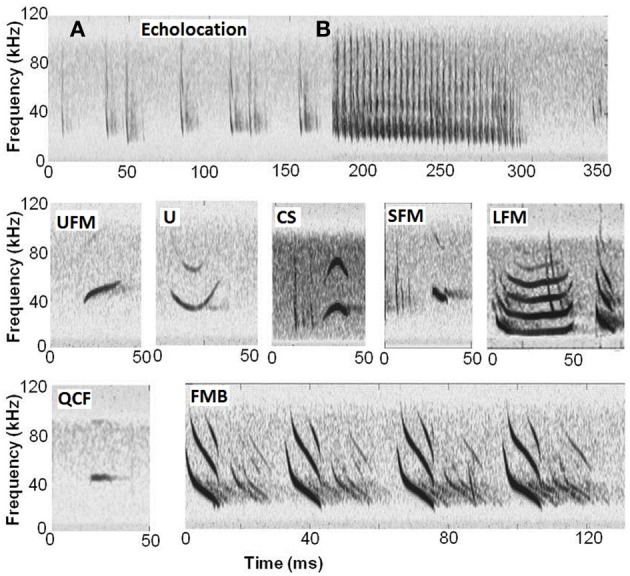 Purchasing some bat bioacoustic analysis software should assist with your recordings and call interpretation. I recommend Sonobat (best, but expensive) or SCANR (from Binary Acoustic Technology). There are other less used options as well (e.g.,the Echo Meter Touch Bat Detector for Apple, for which I picture an example screen shot below): 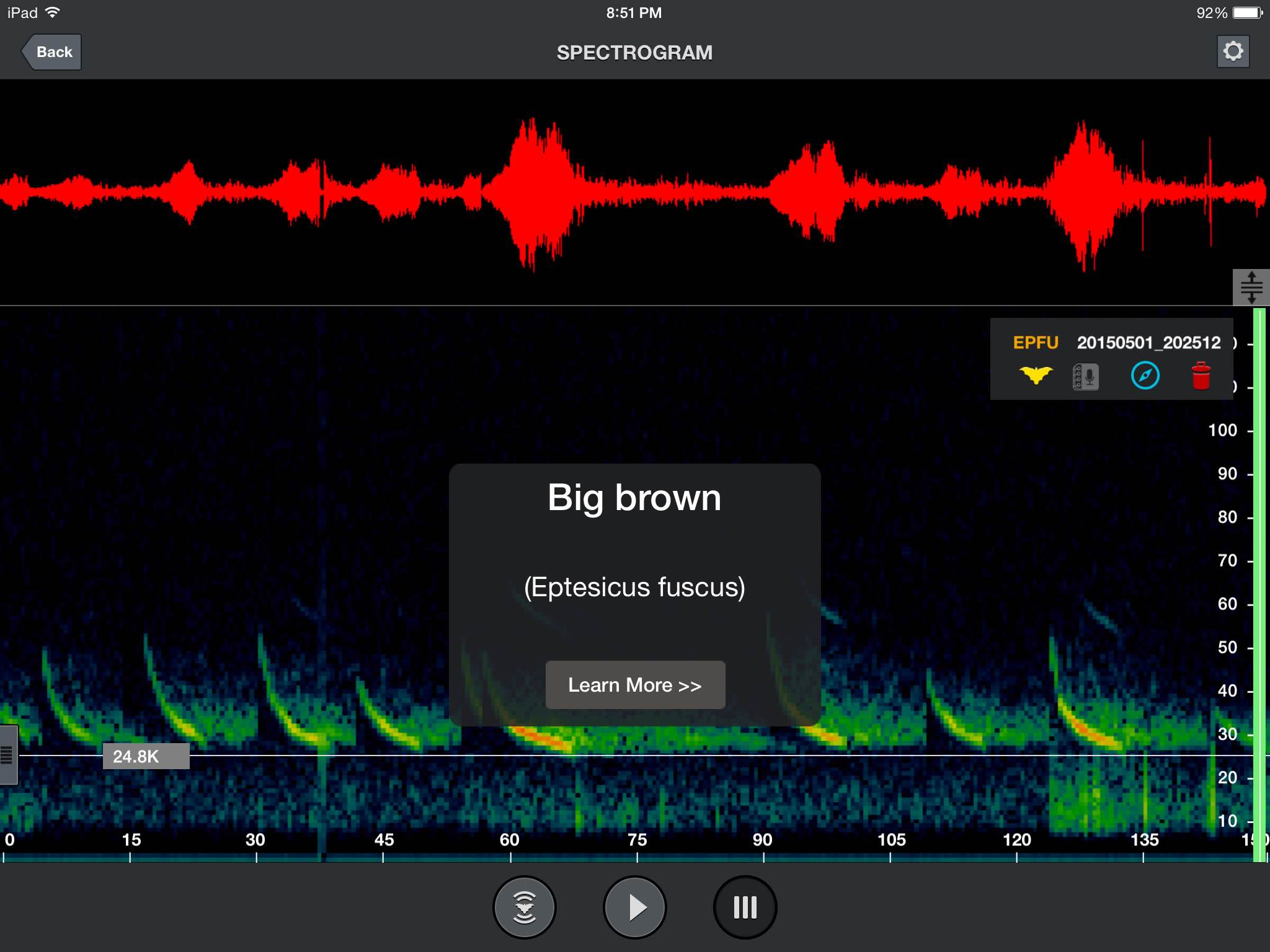 I also want to provide some information and citations about bat echolocation to help inform those interested in this question. I would include this in the comments, but it's too long:

Not the answer you're looking for? Browse other questions tagged species-identification zoology ultrasound bioacoustics echolocation or ask your own question.

1
Are these bat social calls?

3
What bird makes this sound?
18
Help identify this worm-like thing
4
Madrid, Noise by the river: Bird or cricket?
19
What effect does a bat's echolocation have on other bats?
1
What nocturnal animal sound am I hearing in the trees in Maine?
7
What animal / bird can be heard in this evening sound recording from Western Washington, USA?
8
What is this worm like creature?
2
What do bats do if played ultra sound?
2
What is this worm-like creature?