How do two parents, recessive and dominant genes and two complimentary nucleotides end up in one DNA? [closed]

In the basic school, I was taught that half of genome is received from father and another half comes from mother in the form of double-helix DNA, whose first helix consists of dominant nucleotide bases and second helix is a kinda inverted copy of the first helix. I feel like 3 different concepts are mixed here into one DNA spiral and I cannot sort them out. Can you explain exactly how is every concept (parent material, recessive genes and complemenrary nucleotides) are represented in the DNA? The professional and wikipedia explanations are too full and I cannot extract this basic information from too much detail.

For instance, mother and father could donate non-overlapping sections of the double helix, e.g. you inherit a head of DNA from father and tail from mother. I can also guess that first helix consists of primary nucleotides whereas second helix is complimentary. I also understand that despite it is natural think that primary = dominant whereas complimentary nucleotide stands for recessive, it is unlikely coz dominant is a full gene rather than a single nucleotide and dominant is independent and can differ from recessive whereas complemntary implies deterministic relationship between two. Furthermore, receiving dominant from parent1 and recessive from parent2 contradicts the fact that only one of the parent alleles enters the offspring DNA. Probably both are inherited and only one is expressed in phenotype but I am not sure and ask to clarify this. In other words, I would like to know how both parent1 and parent2 chromosomes live in the child DNA if not in the form for helix1 + helix2. Particularly, what are these two chromosomes, next to every person, if not two helix of one DNA 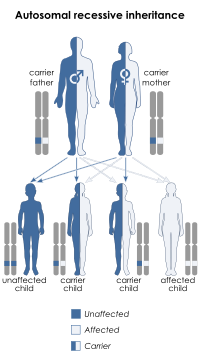 and where are they located? Are these just two DNAs which exist only during meiosis, during first moments of fertilization? How do you end up with only one DNA in the end?

If you are having a hard time understanding the concepts as written, try looking up the articles on Simple English Wikipedia first. The try to make their articles easier for novices to understand.

There is no such concept as Dominant Nucleotide Bases. The two strands of the DNA double helix are complementary and antiparallel. Genes can reside on either strand.

The same is happening when the father produces gametes. The chromosomes from his parents are swapping pieces of DNA.

Also, the double helix doesn't dissociate (come apart) during crossing over [NOTE: for those who know, please do not jump on me for not explaining strand invasion here and the need for homologous sequences for crossing over]. One part of a grandparent's chromosome is exchanged for the exact same part of a chromosome from the other grandparent's chromosome, assuming normal cross over events. The alleles (versions) of the genes in that segment may vary, which is why you have a chromosome is part grandmother and part grandfather.

As for dominant autosomal genetic traits versus recessive genetic traits. A dominant trait means that a heterozygous child will express the phenotype even though they only have one copy of the dominant allele. If it is a disease, then we say the person is affected. If it is a recessive trait, then the heterozygous child will not express the phenotype, so they are not affected by the disease, but they carry the allele and can pass it on to their children. This person is said to be a carrier. If a person is homozygous for a recessive trait, then they will be affected by the disease and show the phenotype.

As for inheritance, you have to draw the punnet squares. This will show you the different patterns and probabilities of inheritance.

During meiosis II the 23 chromosomes again line up at the metaphase plate and they are attached to the spindle by both sides of their centromere / kinetochore complex. When the migrate the two sister chromatids migrate towards opposite poles. Again it is completely random as to whether the recombined chromatid or the chromatid that did not undergo recombination will migrate to the right or the left. Again, there are 2^23 possible combinations for EACH cell.

I will talk about humans only and I will not talk about the special case of sexual chromosomes (and anomalies such as trisomy 21) from the answer just to keep things easy. There is a lot to say, so I am just making a very short overview of different subjects. Get some coffee first, read slowly and don't hesitate to click on the wikipedia links to further your knowledge. 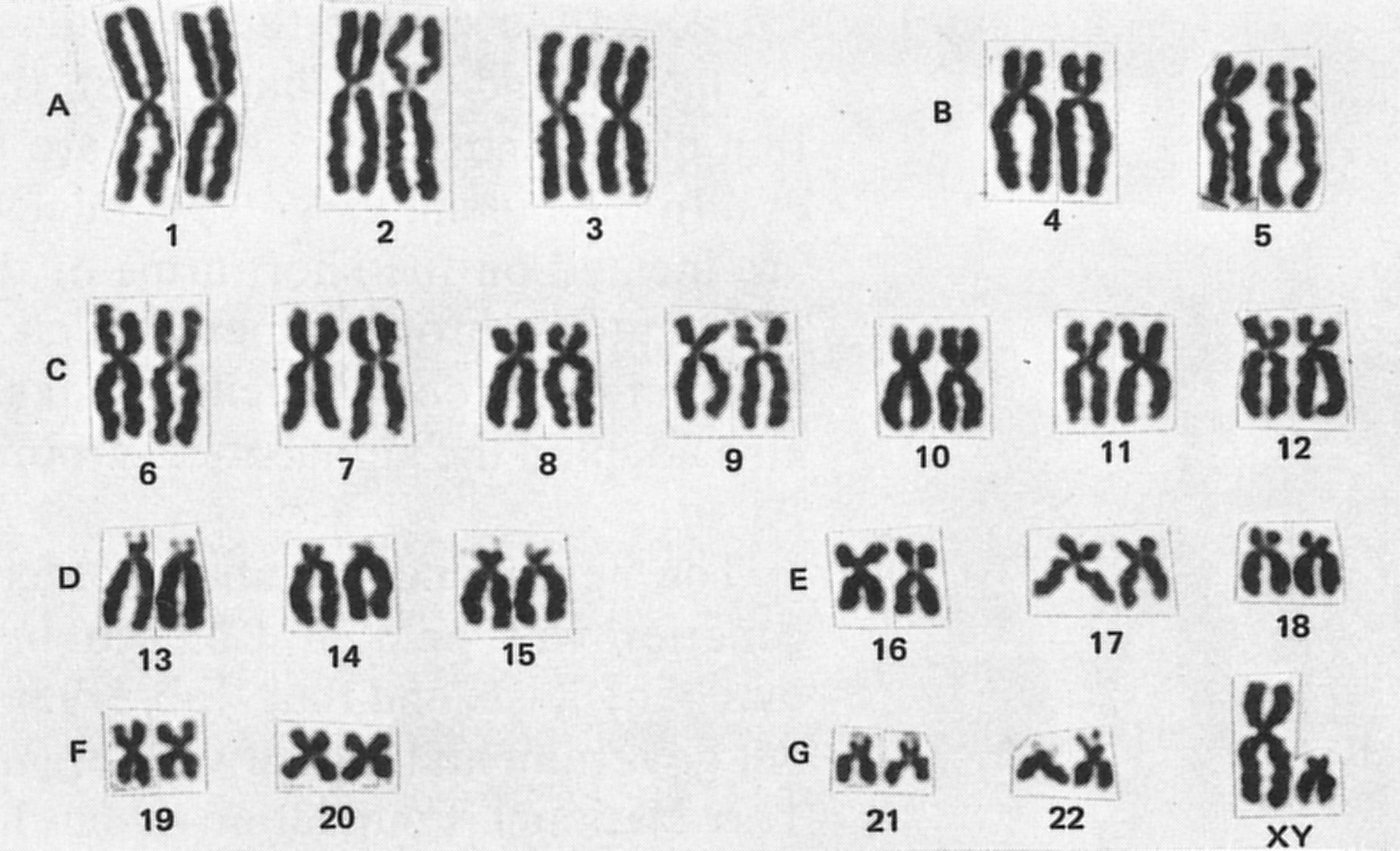 You'll note that the 23rd pair is the pair of sexual chromosomes but I won't talk about them. Note by the way that species that have chromosomes present in pairs are called diploid. Some species are haploids (not pairs), some are tetraploids (4 chromosomes of the same type together), etc... While the terms "diploids species" is often used to refer to mammals for example, it is actually more correct to talk diplontic species. Diplontic species, are those species who are diploid most of the time and haploid only for a short period. Our ovules and spermatozoids are indeed haploids.

Chromosome are more-or-less X-shaped. Each "vertical line" of the X is a double stranded (double helix) chromatids. Two chromatids of the same chromosome are called sister chromatids. Two chromosomes of the same pair are called homologous chromosomes. Note that chromosomes don't always look as they are represented here, it depends on the phase during the life cycle of the cell but this is a story for another time. As you said, one chromatid is made of two strands that are "anti-parallel". The point of the junction in the center (although it is note always in the center as you can see) of the X-shape is called the centromere.

In a pair of chromosomes, one chromosome is inherited by the father, the other one by the mother. Therefore we receive exactly the same amount of genetic information from each parent (but see this post). The egg actually receive 2 single chromatids (one from the ovule and one from the spermatozoid). At some stage of the life cycle each chromatid duplicate to make those X-shaped chromosomes. Therefore, two sister chromatids are exactly (except exceptions!) identical. However, because one chromosome come from the father and the other one from the mother, two homologous chromosomes are not exactly identical. Note that mutations occur during replication of DNA (especially during meiosis). Note also that at the moment of producing our gametes (=spermatozoids and ovules), chromatids from different chromosomes (within the same pair) can exchange DNA. This process is called crossing-over. Here is a schema of this process 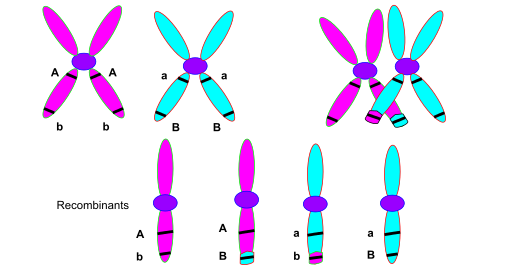 While crossover refers to the mechanism, recombination refers to the statistical association between two loci. On the above picture there are two loci represented and both are heterozygotes (see below for definition) as at one locus are the alleles aA and at the other locus are the alleles bB. Of course, on the sister chromatids both alleles are the same given that the two chromatids are just copy of one another where one comes from one parent. Therefore, a is always with b and A is always with B on the same chromatids. In the absence of crossover, we say that they segregate non-independently. If the offspring get A, (s)he will necessarily get B as well. However, if crossover can occur in between the two loci, then some gametes can carry a and B and some others can carry A and b. The statistical association between two locus is referred to as recombination. the recombination rate between two loci indicates the rate with which a crossover will occur between these two loci.

When talking about DNA, we usually refer to one double helix (one chromatid). DNA, is made of different chemical compounds including the nucleotides. There are 4 types of nucleotides that we are reffering to by the first letter of their names, A, T, C and G. Every time there's a T on one strand there is a A, in the other strand (and vice-versa). Every time there's a G on one strand there is a C, in the other strand (and vice-versa). In consequence one strand is some kind of a negative (photography) of the other strand. 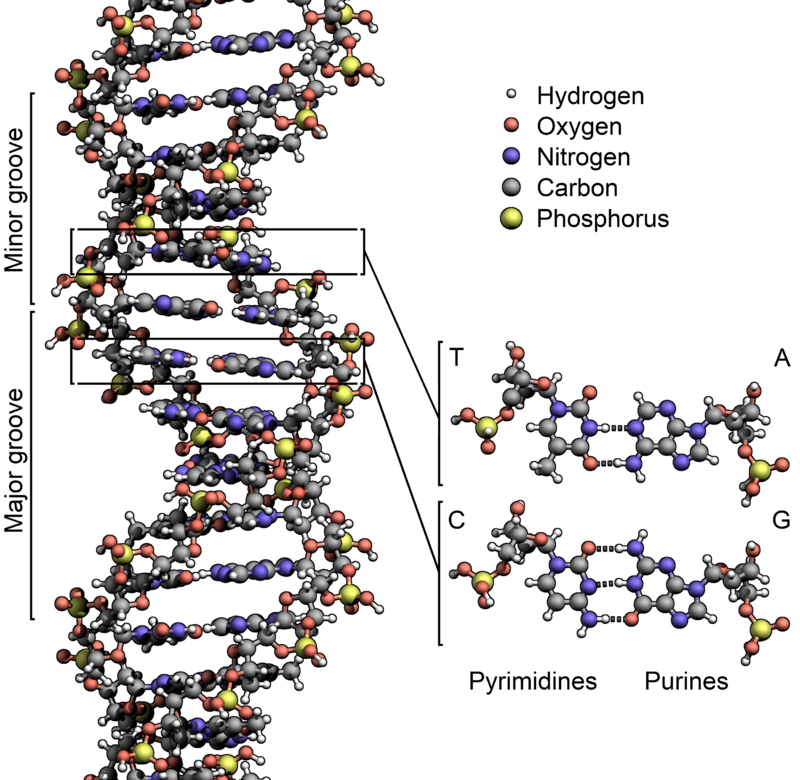 From gene to protein

You can refer to a position on a chromosome as a locus. At different loci are different types of sequences. Without going into the details, a gene is a type of sequence that is used to make a protein. In order to make a protein from a gene, the double helix has to open up over a short region, some proteins come, read the DNA and make up an RNA out of it. The RNA is some kind of negative of the DNA strand that has been read (except that the Ts are replaced by Us). From the RNA some other mechanism (ribosomes; ribosomes are actually made of other RNAs but this is also a story for another time) make a protein our of the RNA. Here is an extremely simplified schema of this process.

Effects of the genotype on the phenotype

As I said above, there are some differences between homologous chromosomes. Consider for example that in a population, at a given locus (let's assume this locus correspond to a gene for simplicity) different chromosomes carry different variants. These variants are called alleles. The words recessivity, additivity or dominance refer to the relationship between two different alleles at the same locus in terms of how the two alleles affect the phenotype. Referring from wikipedia A phenotype [..] is the composite of an organism's observable characteristics or traits, such as its morphology, development, biochemical or physiological properties, phenology, behavior [..].

Not the answer you're looking for? Browse other questions tagged genetics dna meiosis or ask your own question.

12
Does one parent transmit more DNA to the offspring than the other one?

13
Is it possible for two brown-eyed parents to have blue-eyed child?
3
Concept and analysis of Pedigree
0
Odds to clone a parent
1
How do biologists determine the parents of a child
0
How do you find probabilites of carrying an X linked recessive disease in a blank pedigree given only one phenotype?
0
x-linked recessive inheritance and correlation for males
0
Should I consider one or two DNA chains to find how many nucleotides are in a gene?