Why are there no known animals with an odd number of legs?

In my 6th grade science book it is said that there are no three legged animals, and that no animal with an odd number of limbs exists. I checked Wikipedia and could confirm this:

There are no known naturally occurring three-legged animals

On yahoo it is said that

When an embryo is developing, it grows by cell division - the first single cell divides into two, then four, then eight etc. It doesnt' divide into odd numbers - each cell divides in half. So, this means that every creature develops the same on each side of it's body - same number of limbs per side.

It seems to be a valid explanation. So is it true that any organ in any living organism is either one in amount or is in even number? And the explanation of yahoo.com is fine?

I am a beginner in Biology. Please explain in simple terms.

It depends what you mean by 'leg'.

The instinctive way to define a 'leg' is based on its functional use: we use legs to walk on. But if we adopt that definition of 'leg' then there certainly are animals with odd numbers of legs: kangaroos, for instance, have a five-legged gait, functionally using their tail as a fifth leg. There is no developmental process that stops an animal from growing an odd number of appendages, and if one of those appendages happens to be used as a leg, evolution and development will have no problem with that.

However, there is another way to define 'leg', and that is by homology - 'legs' are the appendages derived by evolution from the legs of a common ancestor. Under this definition, (for vertebrates, at least) you're a bit more hard-pressed to find examples of animals with an odd number. This is because those legs are paired appendages, and the developmental pathways for the leg on one side of the body are tied into the developmental pathways for the leg on the other side of the body, so it is hard to evolve an odd number of legs from these appendages.

Hard is not the same as impossible, though. A comparable piece of evolution is the severe reduction in size of fins from one side of the body in flatfishes (flounders, sole, etc). I am struggling to think of terrestrial examples, but it is certainly evolutionarily possible to lose one appendage from a pair but keep the other.

Short answer
The body plan of terrestrial organisms that feature limbs is typically bilaterally symmetric, and hence these organisms have an even number of appendages.

Background
Terrestrial animals featuring appendices for motility (legs, arms) are typically higher organisms. Typically, the body plan of higher animals such as us mammals is typically bilaterally symmetric (Fig. 1). Lower animals may be radially symmetric (e.g. round worms, jelly fish and star fish). Only the simplest of animlad have an asymmetric body plan, such as sponges. With a symmetrical body plan comes an even number of appendages.

The symmetrical body plan is already defined in the blastocyst stage during development. The blastocyst in humans forms in the first two weeks after gestation and contains 10 to 20 cells only (Fig. 2). 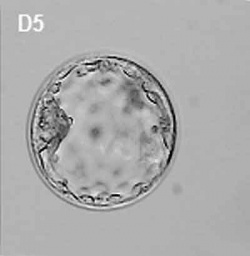 The assumption that organisms must have even numbers of cells merely because cells divide into two each time is false. For example, the nematode Caenorhabditis elegans has either 959 or 1031 cells depending on its sex. Cells can be lost due to apoptosis or natural wear and tear.

Even if that was not the case, cells divide at different rates and times, so it is perfectly plausible for an organism to have an odd number of cells. For example, when one of two cells divide, and the other does not, the final result would be 3 total cells, which is an odd number.

Imagine if the tail of a fish did behave like a leg (imagine a one legged frog). One side, either the left side or the right side, of that tail would naturally dominate and the fish would end up swimming naturally in circles.

Now assuming that being able to go in a straight line over longer distances is a small evolutionary advantage. It would make sense that that a fish tail evolved and grew an internal muscle symmetry that allows it to eventually maintain a straight line.

The same goes if you were to grow a third leg tomorrow. In order for that third leg to be useful to you in evolutionary terms, it would have to be placed in such a way that it doesn't interfere with your balance and your maximum propulsion. Also, its muscle structure would need to be symmetrical between the left and the right side, so as not bias one side over the other.

And of course, such a third leg wouldn't behave like the two other legs because of its forced internal symmetry, so we humans wouldn't call it a leg, we'd most likely call it a tail instead (a cat tail, a kangaroo tail, a snake tail, a fish tail, etc.)

The reason 'there are no known animals with an odd number of legs' - if that is indeed the case, given that stating a negative truth of high probability requires a great deal of examination of facts and records! - could be because it was a stage of development of organisms of a pre-Cambrian period stage of development, or at latest Early Cambrian.

What I am thinking of specifically is the 'Ediacaran' organism/fossil named Charnia. It shows 'glide reflection' in its development and organization, in which successive branches are opposite to the previous branch and a little further along the body axis.

Charnia was, of course, a frond-like animal, resembling nothing relatively modern so much as a fern (which is a plant of course). Given that it was an animal not a plant, and a very early animal for certain, it did not have opposite symmetry and thus, if it had evolved directly into a perambulating organism with legs, it might have had an odd number of them.

When thinking of the conformation of animal life, it is as well to keep the Burgess Shale fossils in mind: animal life that long ago, would appear to have been somewhat 'experimental' still (or, in a phase where all the basic problems were being worked out), and many differing types, some nowadays unrepresented, occurred, outre' in appearance, such as Hallucigenia and Opabinia.

So to sum up, though I cannot point out a known and discovered odd-legged animal (in natural form, as opposed to through amputation or loss of limbs), it is quite possible there was such an animal in Cambrian or pre-Cambrian times, whose fossil remains are as yet undiscovered or not-yet-clearly-interpreted.

Not the answer you're looking for? Browse other questions tagged cell-biology zoology anatomy or ask your own question.

13
Why do we have two of some organs, but not all?
3
Animals with substantial five-fold symmetry besides starfish? Any land animals?
2
List of Asymmetric Animals