What are the major steps of follicular B cell development

This is a learning objective in my curriculum, and after having spent two hours trying to answer it for myself using official course resources (many of which are online, but some of which are behind paywalls and so may be inaccessible to other community members), it's clear to me that I need some assistance.

So I would just like to know what is the latest understanding of the major steps of follicular B cell development in mouse and human.

According to Basic Immunology - Functions and Disorders of the Immune System (3rd Ed.) by Abbas and Lichtman (Copyright © 2011 by Saunders), p.133:

A majority of B cells are called follicular B cells because they reside in the follicles of lymphoid organs. These follicular B cells make the bulk of T-dependent, class-switched, and high-affinity antibody responses to protein antigens and give rise to long-lived plasma cells.

and in the caption for FIGURE 7-2: 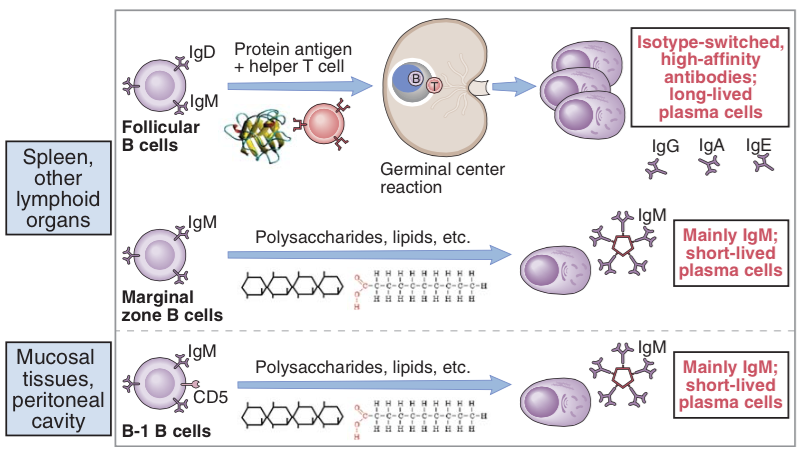 (emphasis not in original)

From the sentence I emphasized, it seems to me that as of 02011, there is still a great deal that is not well-understood about the origins (and perhaps also development?) of human follicular B cells.

Interestingly, in the 4th edition of this textbook (Copyright © 2015 by Saunders), the details have changed slightly (as below): 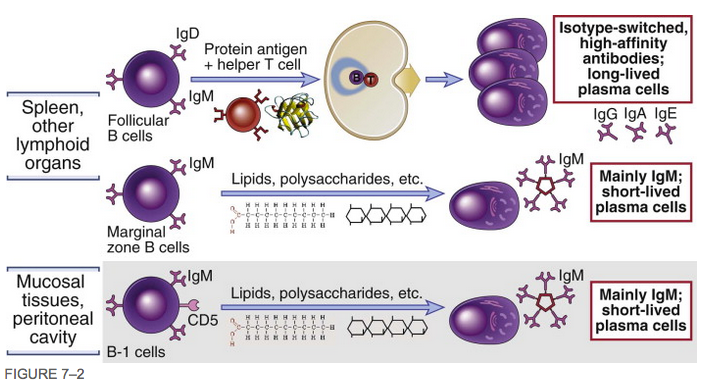 Another reference in my course resources is Cellular and Molecular Immunology, 8th ed., 2014, by Abbas, Lichtman, and Pillai.

In it (Chapter 12: B cell activation and Antibody Production), I find the following about follicular B cells:

Which strikes me as yet another description of follicular B cells, but not a list of steps in their development (which is my learning objective).

The same textbook makes several other mentions of follicular B cells, but does not address their development. Although I should probably already know this (and this may be in some of my lectures but these are not universally searchable and I have precious little time to read), I do not know about either their progenitors or their progeny, and I think this is what is meant by this learning objective: the major steps in their development.

In the same chapter of the same textbook, I also see:

Most mature naive B lymphocytes are follicular B cells (sometimes also called recirculating B cells) that constantly recirculate in the blood and migrate from one secondary lymphoid organ to the next in search of antigen. Follicular B cells enter secondary lymphoid tissues (spleen, lymph nodes, mucosal lymphoid tissues) through blood vessels located in the T cell zones, and then they migrate into the follicles, the B cell zones of these tissues. The movement into lymphoid follicles is guided by the chemokine CXCL13 secreted by follicular dendritic cells, the major stromal cell type in the follicle, as well as by other stromal cells. CXCL13 binds to the CXCR5 chemokine receptor on the recirculating naive B cells and attracts these cells into the follicles. As we will discuss later, the same chemokine-receptor pair is also important during immune responses because it can attract a subset of activated T cells to the follicle.

This seems like a great description of the follicular B cell that also delves into its function, but seems to include nothing about its development.

The same chapter of the same textbook also includes:

Naive follicular B cells survive for limited periods until they encounter antigen (see Chapter 2 ). Follicular B cell survival depends on signals from the BCR as well as on inputs received from a tumor necrosis factor (TNF) superfamily cytokine called BAFF (B cell–activating factor of the TNF family, also known as BLyS, for B lymphocyte stimulator), which provides maturation and survival signals through the BAFF receptor. BAFF and a related ligand, APRIL, can activate two other receptors, TACI and BCMA, which participate in later stages of B cell activation and differentiation (and will be discussed later). These cytokines are produced mainly by myeloid cells in lymphoid follicles and in the bone marrow.

So this is the best answer I can find on my own after many hours of searching and reading relevant passages in recent textbooks on the subject. Yet this answer also seems incomplete to me. After all this reading, I still have no "steps (per se) of follicular B cell development."

So I could really use a more complete answer.

8
What are the clotting factors' effect on avascular necrosis development?
3
What cell types produce immunoglobins and where are those cells found?
0
What is the function of dendritic cell in immunity?
7
What is cross-immunoreactivity, and how does it impact vaccine development?
0
What does differentiation of B-cell mean?
3
What does the term "recruitment of T-cell" mean?
1
What determines whether a regulatory T cell suppresses a naive T cell binding the same antigen-presenting cell?