Is there nutrient absorption in the large intestine of hindgut fermenters?

I have divided this answer into a section on horse and rabbit. While there are many other hindgut fermenters, these species are good illustrations of different ways hindgut fermenters can digest and absorb nutrients from their food.

As you know, absorption of "nutrients" occurs along the intestines, but at varying degrees at different sites. Most compounds are primary absorbed in the small intestine of the horse. This includes protein, glucose (soluble carbohydrates), fats, calcium, and magnesium.

Any carbohydrates that are not absorbed in the small intestine reach the hind gut. Here they are fermented by bacteria to short-chain volatile fatty acids (VFAs) and lactic acid. Horses can use the VFAs (propionate, butyrate, and acetate) as an energy source, but a diet too high in grain can also lead to excessive lactic acid production in the hindgut, and as a result the horse may experience colic. As your question pertains to the hind gut, a nutrient of main concern is therefore volatile fatty acids.

The hindgut of the horse is very long and developed. To review with the anatomy of the horse hindgut, it consists of the caecum, ventral colon, dorsal colon, transverse colon, descending colon (or small colon), and rectum. 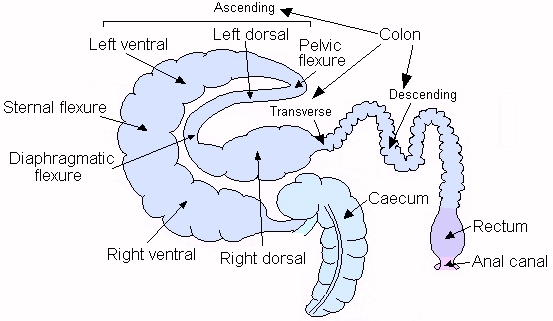 In a study in 1974, RA Argenzio et al. determined that among the parts of the horse hindgut, most VFAs were produced and absorbed in the ventral colon, 8-12 hours after feeding. This is depicted by the graph below, which shows a large negative net production of VFAs after 8-12 hours (i.e. more VFAs absorbed than produced). Note that the caecum and dorsal colon are also important sites of VFA production and absorption. 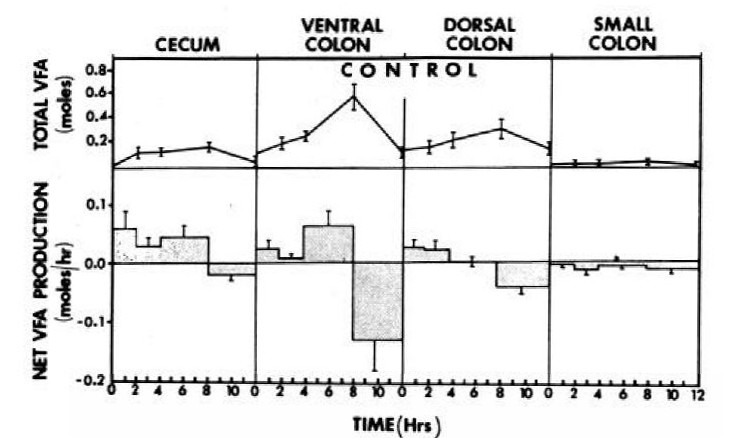 The hindgut is also an important site for phosphorus absorption in the horse, unlike many other species that primarily absorb phosphorus in the small intestine. This is thought to be because most of the dietary phosphorus in the horse in phytin phosphate, which must be exposed to the enzyme phytase produced by the microbial flora in order to be absorbed. Studies such as Schryver et al. (1972) and T. Matsui et al. (1999) have shown that most phosphorus is excreted by the small intestine and caecum, and most is absorbed in the dorsal colon and small colon. The figure below from Schryver shows the net absorption of phosphorus on the various experimental diets. Note that this is oriented opposite to the VFA figure above; absorption is positive rather than negative on this graph. 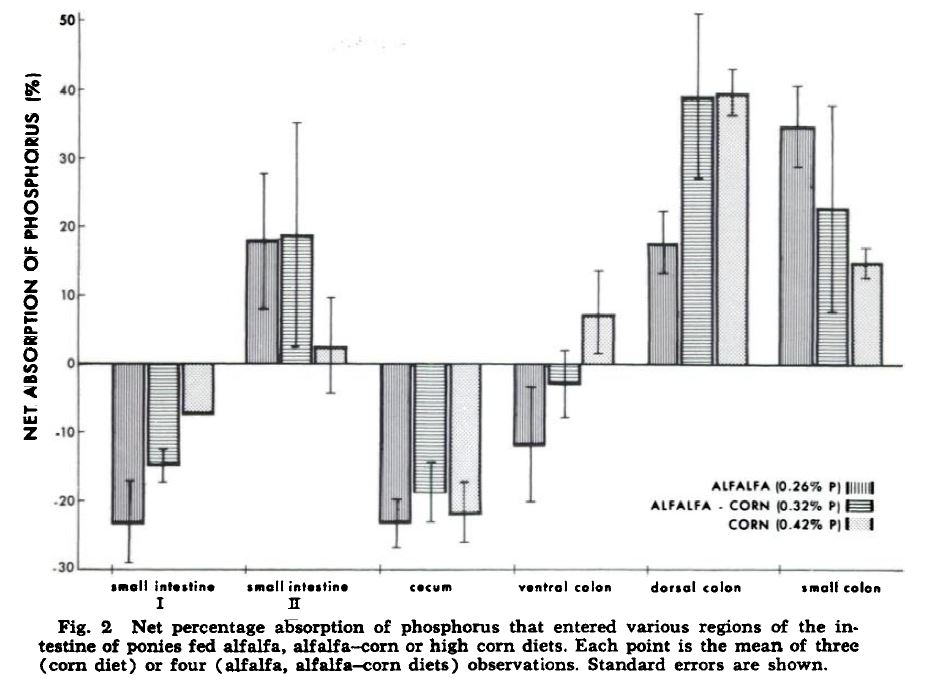 To begin with the rabbit anatomy, you will note that the colon of the rabbit is much less developed than that of the horse. However, both are hindgut fermenters, and what they do have in common is a very large caecum.

As in the horse, much of the digestion and absorption of nutrients occurs in the small intestine. This includes protein, fats, and simple carbohydrates (glucose), as well as some vitamins.

Also like the horse, the digestable material not absorbed by the small intestine passes to the caecum, where it undergoes fermentation by the microbial flora. The large fibrous material passes directly to the colon, where water is absorbed and forms hard faecal pellets, while the small digestible material passes through reverse peristalsis into the caecum. What is different in a rabbit to a horse, however, is that the about 8 hours after feeding, the caecal material is packaged into a small pellet called a caecotrophe. As or shortly after the caecotrophe is excreted, the rabbit re-ingests the caecotrophe. As this food has been digested once already, the small intestine is better able to absorb nutrients from it.

As an example, important nutrients that are able to be absorbed due to caecotrophy in the rabbit are the B vitamins such as niacin, riboflavin, folate, and cobalamin (vitamin B12). One of the early studies on this topic is Kulwich et al. (1953).

The reason for the difference between the horse and rabbit is fundamentally an anatomical difference. Both species have a large caecum which enables fermentation of plant matter. However, the horse has a long, voluminous colon in which it can absorb many nutrients, but they will lose protein and other nutrients in this process because the colon is less adapted to absorb them. In coprophagic (rat) or caecotrophic species (rabbit), they do not have as long a colon, but can absorb vitamins and proteins lost in the faeces during the second pass through the gastrointestinal tract.

An excellent and very detailed review of the gastrointestinal tracts and nutrient absorption in a variety of species is this freely accesible paper by Stevens and Hume, "Contributions of Microbes in Vertebrate Gastrointestinal Tract to Production and Conservation of Nutrients."

Stevens, C.E., and Hume, I.D. (1998) Contributions of Microbes in Vertebrate Gastrointestinal Tract to Production and Conservation of Nutrients. Physiological Reviews, 78(2):393-427.

Not the answer you're looking for? Browse other questions tagged physiology digestive-system gastroenterology or ask your own question.

3
How does horse extract the energy to needs from a relatively small digestive system?

6
Absorption rate of Infrequently eating animals?
2
Is there any mechanical digestion that occurs once food/chyme enters the small intestine?
0
Absorption of digested food in small intestine
1
Absorption of pentoses in intestine
2
What can pass through the intestinal membranes?
11
Why aren't the antibodies in the mother's milk digested by the infant's digestive system?