Are there any non-mammalian species known that lactate?

Are there any non-mammalian animals that produce milk to feed their young, or are mammals the only milk-producing animals?

Short answer
Technically, only mammals lactate. To lactate means to produce milk from the mammaries to feed a baby or young animal. Milk, in turn, is defined as the secretions from mammary glands. However, there are animals other than mammals that produce milk-like substances to feed their young.

Background
Both male and female pigeons (Columba livia) possess the ability to produce a nutrient substance, termed pigeon ‘milk’, to feed their young. A similar substance is produced by flamingos and male emperor penguins. The normal function of a crop is a food storage area located between the oesophagus and proventriculus where food is moistened before further break-down and digestion through the gastrointestinal tract (Fig. 1). 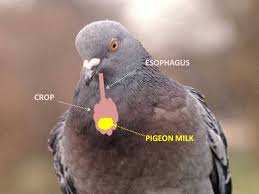 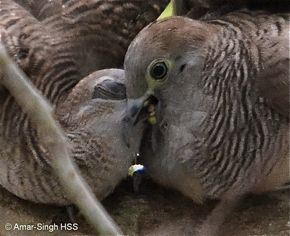 Fig. 1. Schematic of the location of the 'milk'-producing crop in a pigeon (left) and a pigeon feeding its chick from its crop (right). Sources: ZME Science and Bird Ecology Study Group

During the process of pigeon ‘lactation’, a curd-like substance is regurgitated from the crop to the chick. The dry-substance of pigeon ‘milk’ is 60% protein, 32-36% fat, 1-3% carbohydrate and some minerals, including calcium. It has been shown that pigeon ‘milk’ contains IgA antibodies, which provides evidence suggestive that it is more than a nutrients alone. The physiological mechanisms governing pigeon ‘milk’ production and delivery are unknown. It is well documented that the pigeon crop is responsive to the lactogenic hormone prolactin. However, the pigeon crop tissue during ‘lactation’ is structurally unrelated to the mammary glands in mammalians, because it is not glandular and secretory processes do not seem to be involved (Gillespie et al, 2011).

The similarity between this process and lactation in mammals is striking, but is a case of convergent evolution, where unrelated species independently evolve similar traits. 'Milk' production is also recorded in some fishes, where it is fed to their young in the form of a mucous secretion on the skin (Buckley, 2010). Certain amphibians shed skin cells that are fed to the young. But the 'milk' of pigeons and doves is thought to be the most highly specialized of any non-mammalian 'milk' (Australian Geographic, September 2011).

Producing milk, per se, is a strictly mammalian phenomenon. There are functionally similar processes in non-mammals (e.g., 'crop milk', produced by some birds), but because these processes evolved independently from the evolution of mammalian milk, they are not considered to truly be milk.

Not the answer you're looking for? Browse other questions tagged physiology mammals milk or ask your own question.

90
Are humans the only species who drink milk as adults?
6
Do any birds beside the family Columbidae (or any reptile or mammal) feed their young "Crop Milk"

22
Do cows produce milk excessively?
6
Do any birds beside the family Columbidae (or any reptile or mammal) feed their young "Crop Milk"
4
How do Kangaroo mothers deliver the correct kind of milk to the correct joey?
24
Why is it advised that infants are fed mother's milk?
7
Are humans the only mammals that are known to display homosexuality?
5
Are there examples of animals that live in groups, where all have the same role?
1
Are there known life expectancy differences in non human mammals by sex?
0
Is there any species of mammals where males can feed the offspring with milk?