How to correctly and accurately identify a few species of trees from their leaves?

I want to identify a tree from one of the 12 species listed based on observing their branch and leaves. Is there quick and neat way to do it?

A good first step is to pay attention to common differences between tree structure:

1. Alternate vs. Opposite structure 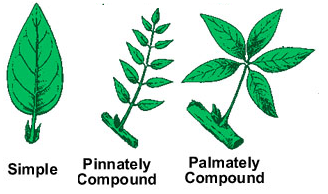 Generally when you come across a new tree in Eastern N. America I'd recommend going through these steps:

If you can answer yes to (any or all of) those questions you typically SIGNIFICANTLY reduce your options.

You also want to make sure you're aware of large variations in some species (especially oaks and hickories). One good example is the difference in shape, texture, and color of sun leaves vs. shade leaves of many species.

Importantly, paying attention to WHERE the tree is located (and what else is growing around it) as this can really help narrow your choices. You'll also start recognizing common cohabitants of certain regions.

Finally, don't be afraid to use your many senses (smelling, feeling and even tasting) -- though get to know poison ivy well before you start licking plants!!

Ok, now for some useful hints:

Not the answer you're looking for? Browse other questions tagged species-identification botany taxonomy trees or ask your own question.

9
What type of tree is this?

6
How do plants intake minerals through their leaves?
0
how to find accurately the closest species to my plant species?
1
Are "constraint trees" in phylogenetic analysis cheating? How can I correctly use them?
0
Why do some trees hold their leaves through fall and winter?
2
Can someone identify this species from the pea family?
1
What causes the yellow and brown spots on our sour cherry tree?