What is the effect of the wavelength on the spectrophotometric measurements of protein?

Does the wavelength setting affect the absorbance reading of a spectrophotometer? For example, if I am using a spectrophotometer at 550 nm to determine the protein concentration of my samples, would my results be different if I analyze them at 500 nm?

In addendum, keeping the wavelength around the absorption maximum for the light-attenuating species avoids introducing error into Beer's Law. There are limitations to the law, outlined here where we can see that around the lambda max, there's little change in absorption per unit wavelength:

In case B, this would end up returning a bad extinction coefficient! You can experimentally determine this point either by testing the solution at different wavelengths or more accurately, running a program where the machine goes through it's entire wavelength range and measures absorption for you. You'll get a parabola where the maximum is your lambda max, so it's solvable by calculating the maxima if necessary (take the first derivative, set y'= 0, solve for y when x = (y'=0) for the associated ordered pair). You also want to be careful when you're using something like the Bradford assay where the bound form of the dye shifts the lambda max!

Light absorption happens because of interaction of light with electrons (in a way) such that the energy of the light is transferred to some electrons that moves them to a higher energy state.

As per quantum chemistry (Bohr's model of hydrogen can be referred for a basic understanding), there are distinct energy states (solutions of the Schrödinger equation) and there are no intermediate levels. Therefore, to excite an electron to a higher energy level the energy of the incident light should match the energy gap between the ground state and the excited state.

In a molecule, there are different electrons, that reside in different orbitals and environments; only a few electrons can be exited by the energy that UV-Visible range of the electromagnetic spectrum can provide. These electrons are typically referred to as chromophores. You should refer to a book on spectroscopy for more details. A molecule can have multiple chromophores and each may absorb a different wavelength.

Having said that, there are energy bands (multiple closely spaced energy levels) in the molecule instead of fixed energy state which allows absorption in a range of wavelengths around a value at which the absorption is maximum. The wavelength vs absorption graph will give a peak at the maximum (which usually looks symmetrical but not always necessarily be so). 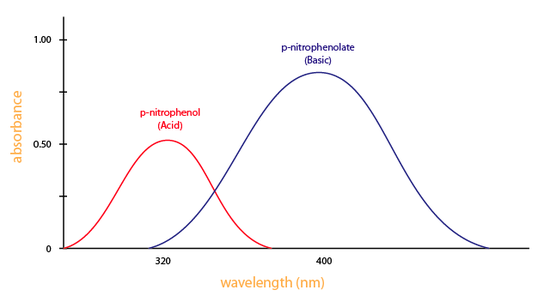 The width of this absorption band would differ between different chromophores; so in your hypothetical case, some chromophore which has an absorption maximum at 580nm may absorb 530nm while another chromophore with same maximum, may not.

The Beer-Lambert's law will hold for all wavelengths that can be absorbed i.e. the absorbance would be proportional to the concentration of the molecule (unless there are complex phenomena like energy transfers that may be dependent on concentration; this is unlikely in dilute solutions).

As a practical suggestion, I would say that if your spectrophotometer has fixed options then choose the wavelength that is closest to the absorption maximum.

Not the answer you're looking for? Browse other questions tagged methods or ask your own question.

0
How can I fit the A595 of my unknown samples to the data?
3
Can fireflies species be identified with their wavelength?
4
Does food really give our bodies the energies that we have determined by burning them in the lab?
0
Biology experiment with algae method help