What kind of tortoise is this?

Can you help me to ID this tortoise? It was walking around near to my house and then my mom found it, so we'd like to know more info. Its Straight Carapace Length is about 5+ inches. Found it in mid-Mexico (Guanajuato state). Most part of the year we have a warm weather. 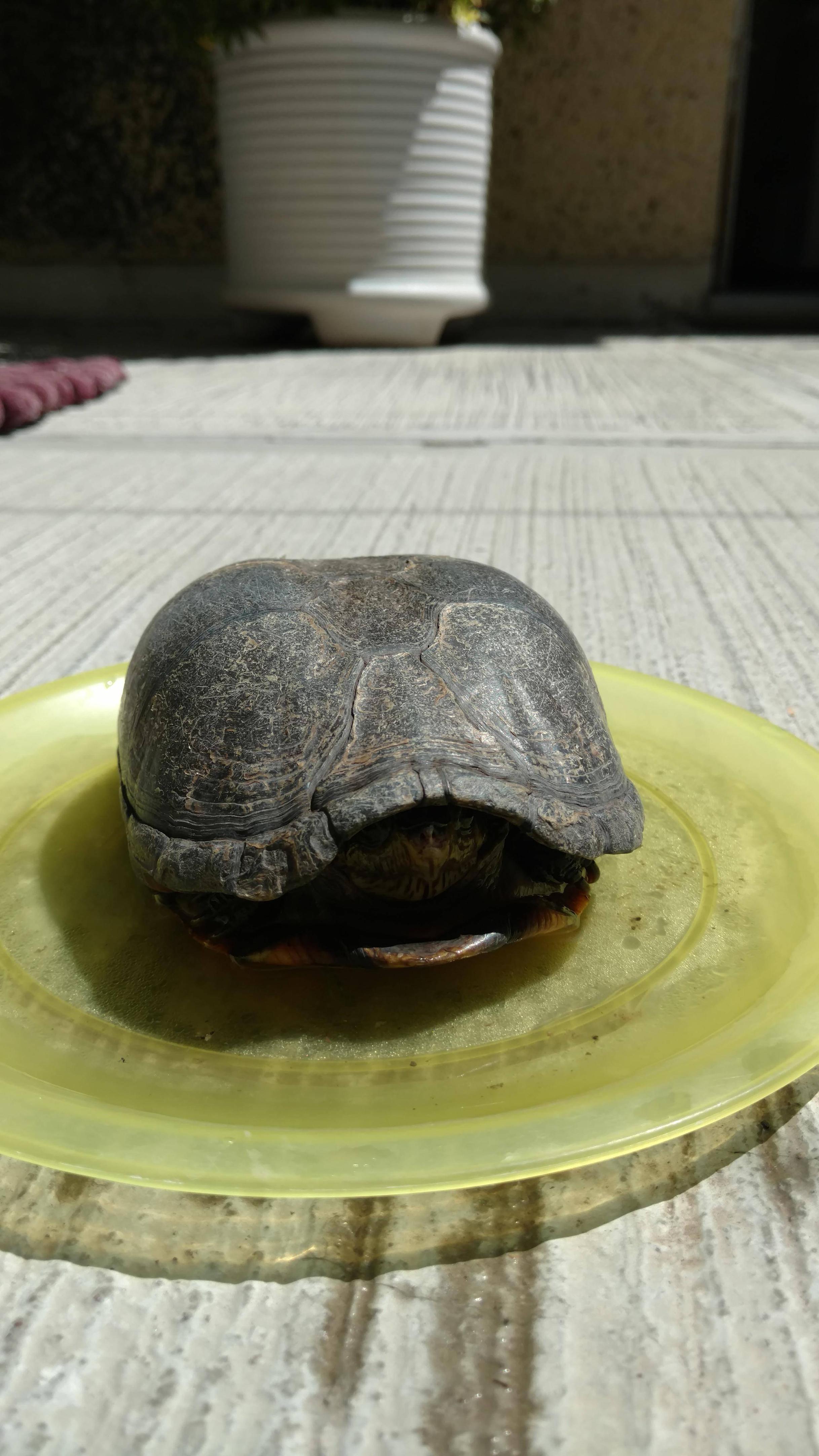 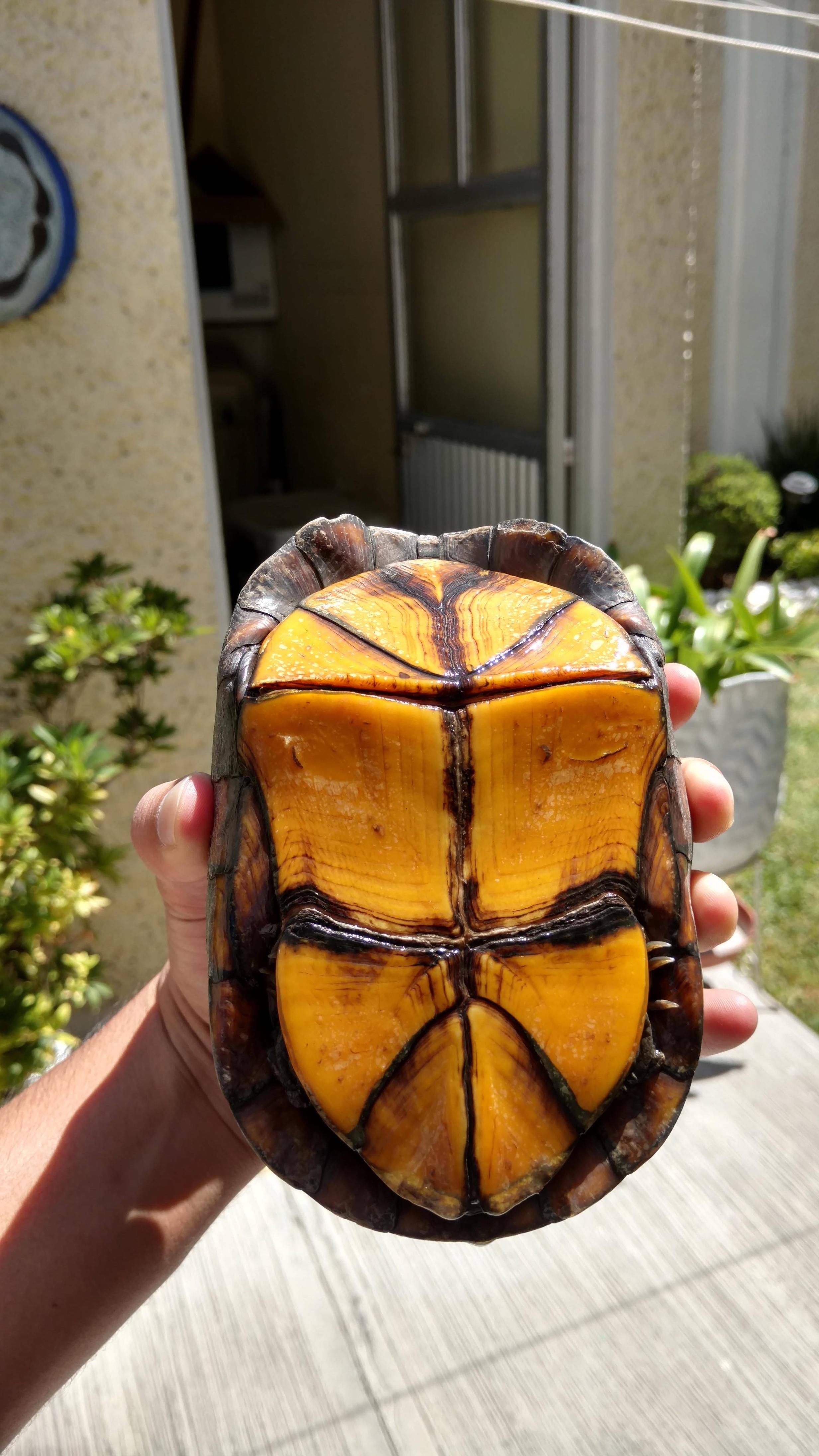 The front end of the plastron (the flat 'ventral' part of the shell) is hinged, so that the turtle can enclose itself almost completely, a characteristic of box turtles.

Box turtles are turtles of the genus Terrapene native to North America (United States and Mexico). They are also known as box tortoises, although box turtles are terrestrial members of the American pond turtle family (Emydidae), and not members of the tortoise family (Testudinidae). The twelve taxa which are distinguished in the genus are distributed over four species. They are largely characterized by having a domed shell, which is hinged at the bottom, allowing the animal to close its shell tightly to escape predators.

Your turtle certainly has a domed shell. There is a lot of wear and tear on the shell, but not so much on the plastron. Box turtles can live 100 years.

From the lack of coloration on the top part of the shell and the paucity of markings on the plastron, I think it is either a Three-toed Box Turtle (Terrapene carolina triunguis), or a Mexican Box Turtle. The Mexican box turtle can grow slightly larger than the Three-toed box turtle. I can't really tell them apart. Boxturtles.com might help.

Their appearance is similar to that of the Three-toed Box Turtle.

The three-toes refers to the hind feet (which can also have four toes, to make matters worse.)

Three-toed box turtles have a domed shell which grows to an average 4.5 to 5 inches in length. The record shell length for this subspecies is 7 inches. The highest part of its carapace or upper shell is more posteriorly positioned than in the other subspecies. The dorsal and limb coloration is commonly completely absent, although some dark blotches are common in adult turtles. These areas more often being a uniform olive green or tan color. 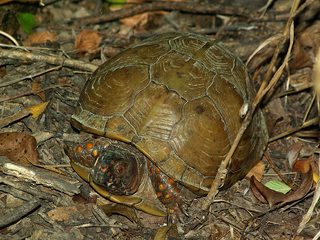 Shy and quiet are the traits of a Three-toed Box Turtle, both in its personality and in its coloring. Unlike the bold patterning and color seen on other eastern box turtles, the color of this species is quite subdued. Occasionally there will be a Three-toed that is more brightly colored, but for the most part they are a fairly uniform olive-brown to brown or horn color.

Not the answer you're looking for? Browse other questions tagged species-identification reptile or ask your own question.

8
What species of eagle pushes their young to teach them flying?
14
Name and Behaviour of Arthropods near a Cactus
5
Species identification - what kind of worm is this?
0
What kind of spider is this?
1
What kind of longhorn beetle is this?
5
Can you identify this insect?
6
What are these tiny creatures swimming around my aquarium?
1
Can someone help me identify this Brazilian spider?