Do all different types of neurons serve different roles?

I know from my basic education in neurology that the brain has various sorts of neurons. These are usually bunched into 3 different categories (sensory, moto and interneurons).

I read in a recently published book, and papers on modern neuroscience that there have been thousands of different types of neurons identified in the brain. Does this mean that there are different types neurons each dedicated to a very specific task in the brain? If that is true, then what is each individual neuron's job (a few examples would be sufficient)?

neuroscience brain neurophysiology
Share
Improve this question
edited May 17 '16 at 8:57

Short answer
Neurons were (and still are) often identified based on their histological features (e.g., by Cajal). In turn, the structural hallmarks of neurons are often related to their specific functions.

Background
The question is broad and difficult to answer without restricting to some example types of neurons. As you say, about 10,000 types of neurons have been identified. Their roles are often obscure. I will restrict the answer below to a few examples of neurons with relatively well characterized histological features and relatively established functionality. 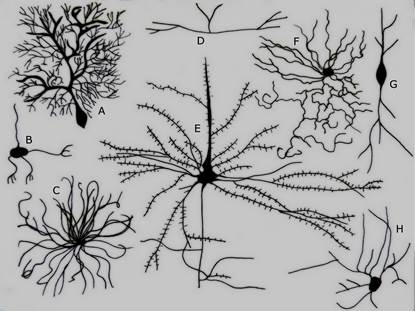 The Purkinje cell (Fig. 1A) receives large amounts of input in the cerebellum, integrates it and sends it away to deeper layers. Hence, as an integrator, it has an elaborate input side (large dendritic tree) and a single output axon. The basic function is similar to the pyramidal cell in the cerebrum (Fig. 1E) and their appearance is hence similar.

On the other end of the spectrum is the spindle neuron (Von Economo neuron, Fig. 1G), which is believed to receive simple input and generate simple output and is built for speed. Less integration allows for faster responses. Hence, its dendritic tree is much less elaborated than the Purkinje cell (cf. fig. 1A) (Allman et al., 2011).

As a last example: the Chandelier cell (Fig. 1F); these neurons have axons that form elaborate collaterals that are believed to form local inhibitory connections in the cortex to keep (excessive) stimulation in check; hence their output is more elaborate, with relatively simple input. Dysfunction is believed to be associated to epilepsy (excessive stimulation) (Inan & Anderson, 2014).

Not the answer you're looking for? Browse other questions tagged neuroscience brain neurophysiology or ask your own question.

7
Are cerebellar basket and stellate neurons actually different cell types?
9
Are there any types of cancer that cause neurons to divide?
5
Do human neurons in a petri dish do different things from chimpanzee neurons
1
Do individual neurons communicate with the origin of thoughts?
10
How are neurons / synapses “biased”?
7
Do self-exciting neurons exist?
1
Excitability of neurons
1
Why are there exactly 207 morpho-electrical types of neurons?
3
What differentiates neurons in different parts of the brain?