I encountered the following passage in the book The Art of Interactive Design by Criss Crawford (bold formatting is mine):

[...] From stalking and evasion to the chase, the [interaction between mammalian predator and mammalian prey] is loaded with complex mental twists and turns as each tries to anticipate the opponent’s move and counter it. By contrast, the mammalian hunter’s relationship with reptilian prey is much simpler: the prey’s defense lies in venom, camouflage, inaccessibility, or speed. There’s nothing like the death dance between coyote and jackrabbit. And reptiles themselves don’t hunt in the formal sense; that’s too sequential. They wander around looking for an opportunity, and when they come across one, they strike; that’s all.

How accurate is the claim in bold font?

Short answer
I think the author is mostly right, but there are exceptions.

Background
The author is probably referring to hunting as being an "active foraging" strategy, while he ascribes the foraging behavior of reptiles to be a "sit-and-wait" strategy.

Active hunters include the classic, and dramatic high-speed, long-distance pursuit strategies deployed by cheetahs and lions, which are indeed mammals. Lions and dolphins are well-known examples of pack hunters that use consorted team effort to catch prey. 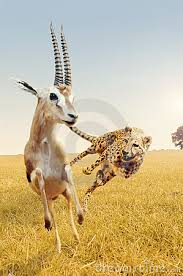 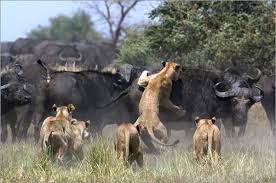 Reptiles, on the contrary, indeed often wait silently for passing prey, instead of deploying active hunting strategies. Well-known examples are crocodiles that lurk silently below the water surface to swiftly grab passing prey, and Komodo dragons that patiently wait for hours at a time to take down passing prey. 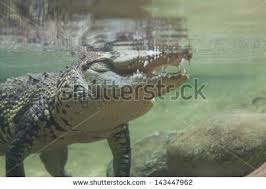 However, there are exceptions. A study performed by Eric McElroy from Ohio State University reports that lizards use two basic foraging techniques. In the first approach which they dubbed sit-and-wait, lizards are basically waiting for their prey to pass. Then, with a quick burst of speed, they run after their prey, snatching it up with their tongues.

In the other form known as wide or active foraging, lizards move constantly but very slowly in their environment, using their chemosensory system to stalk their prey.

As expressed in the comments, the answer to this question depends on how you define 'hunting'. However, using common definitions in biology, hunting is almost used as a synonym to predation (see quoted definitions below). In that sense, the statement in your question is clearly incorrect, since it is describing the the foraging behaviours of predatory reptiles.

The description of reptile hunting in your quote is also too simplistic, and there is a range from sit-and-wait strategies to active pursuit of prey, see e.g. the section Foraging models in Pianka & Vitt (2006).

A couple of useful definitions can be found below.
From Encyclopaedia Britannica:

Predation, in animal behaviour, the pursuit, capture, and killing of animals for food. Predatory animals may be solitary hunters, like the leopard, or they may be group hunters, like wolves.

The senses of predators are adapted in a variety of ways to facilitate hunting behaviour.

predation (prɪˈdeɪʃən) n
1. (Zoology) a relationship between two species of animal in a community, in which one (the predator) hunts, kills, and eats the other (the prey)

predation is a biological interaction where a predator (an organism that is hunting) feeds on its prey (the organism that is attacked).[1] Predators may or may not kill their prey prior to feeding on them, but the act of predation often results in the death of its prey and the eventual absorption of the prey's tissue through consumption.

Even if 'hunt' is often defined in terms of active pursuit, it can also include broader and more passive elements, for instance "seek out; search for", see www.thefreedictionary.com:hunt:

hunt (hŭnt)
v. hunt·ed, hunt·ing, hunts
v.tr.
1. To pursue (game) for food or sport.
2. To search through (an area) for prey: hunted the ridges.
3. To make use of (hounds, for example) in pursuing game.
4. To pursue intensively so as to capture or kill: hunted down the escaped convict.
5. To seek out; search for.
6. To drive out forcibly, especially by harassing; chase away: hunted the newcomers out of town.

I can see the point by @AliceD that 'hunting' is often (in every-day language) used in reference to "active foraging". However, in my eyes this is too restrictive. Also note that the main use of 'hunting' is in reference to hunting by humans, and some of these hunting methods mimic the sit-and-wait strategies of reptiles (see e.g. some methods for big game hunting and the use of traps). If sit-and-wait strategies are not considered hunting, then you are also excluding some human hunting practices from 'hunting'.

Not the answer you're looking for? Browse other questions tagged ecology ethology behaviour reptile predation or ask your own question.

5
Can reptiles digest grains?
19
Was the recent "conservation hunt" of a black rhino supported by science?
22
If dinosaurs could have feathers, would they still be reptiles?
12
There aren't any animals like hornets that hunt large prey (like a rabbit, or even up to a deer), right? Why not?