It’s a well mentioned fact that when the stereocilia of the cochlear hair cells bend in one direction, the hair cell depolarizes, and when the stereocilia bend in the other direction, the cell hyperpolarizes. When the basilar membrane vibrates, the stereocilia are bent back and forth, creating depolarizations in the hair cells followed by hyperpolarizations. What I’m having trouble understanding is why this is significant. This does not determine the frequency of the sound wave, as that is determined by the location along the basilar membrane that the wave impinges on. I don’t see how this would determine amplitude either, seeing as a greater amplitude would only create more drastic bending of a greater number of hair cells. Can anyone shed some light on this?

There are roughly two modes of pitch coding in the cochlea: place-coding and temporal coding. The place-theory is the most prevalent accepted model of how the cochlea realizes pitch coding (e.g., Zwislocki, 1991). Basically, it is based on a frequency-to-place Fourier transformation on the incoming sound, where each frequency is coded on a different place on the basilar membrane, as described accurately in the question.

However, there is another, much overlooked way of coding pitch, namely temporal coding. Up until about 1 kHz, spiral ganglion cells in the auditory nerve and acoustical brain stem regions (such as the inferior colliculus) have been found to respond in a phase-locked pattern (Du et al., 2011). Electrophysiology in auditory nerve fibers illustrates the phase-locked activity in response to low-frequency sounds (Fig. 1). This phase-locking behavior of neurons in the auditory system is called the frequency-following response (FFR). 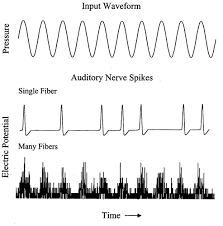 However, as you rightfully state in your question - why would inhibition of auditory nerve fibers (ANFs) be helpful? Figure 1 illustrates nicely that the auditory nerve FFR is rectified, i.e. only the upper half is coded, while negative action potential counts obviously don't exist; ANFs fire, or they don't, they don't fire negative action potentials. However, one has to realize that a relatively large proportion of ANFs in healthy ears spontaneously fire, i.e., in the absence of sound the auditory nerve is still remarkably active. Spontaneous firing rates vary from 0 to more than 100 spikes/s (Jackson & Carney, 2005). Hence, suppression of spontaneous activity codes pitch too.

Moreover, as a theoretical and un-referenced side note - the auditory system processes acoustic information on the sub-millisecond level. Left/right sound localization is performed by the auditory system by resolving inter-aural time differences (ITDs). By analyzing the delay at which sound arrives in one ear with respect to the other, the localization in the horizontal plane can be estimated. ITDs do not exceed 0.8 ms, given the speed of sound and the size of the human head. This is well below the time it takes for any action potential to develop(!). Hence, by deploying both phases of the sound, one phase being excitatory, the other inhibitory at the ANF level, no time is lost when a sound wave happens to enter the cochlea with its inhibitory flanking phase first.

The depolarization and hyperpolarization of stereocilia in the ear is significant for its role in transduction. Hair cells are involved in changing mechanical energy into changes in membrane potential, a process called transduction.

When the cells are displaced and move in the direction of the tallest stereocilium, K+ enters the cell and causes depolarization which allows more transduction channels to open. This depolarization opens voltage gated calcium Ca2+ ion channels. The influx of Ca2+ causes neurotransmitter release from the basal end of the hair cell to the auditory nerve endings which sends signals to the brain.

Movement of the hair cells in the opposite direction causes hyperpolarization which prevents influx of K+ and closes the Ca2+ channels at the base resulting in smaller release, or no release of the transmitter. This allows hair cells to generate a sinusoidal receptor potential in response to a sinusoidal stimulus which preserves the temporal information present in the original signal up to frequencies of 3 kHz.

So the depolarization and hyperpolarization of hair cells is significant because the constant release of transmitter drives the spontaneous activity in the auditory and vestibular nerve fibers. The interaction of Ca2+ influx and Ca2+ dependent K+ efflux lead to electrical resonances that enhance the tuning response properties within the inner ear.

Not the answer you're looking for? Browse other questions tagged neuroscience neurophysiology hearing human-ear senses or ask your own question.

3
Difference in reptile inner ear and otosclerosis
9
How can antibiotics damage the ear?
9
Are sensory receptors neurons?
4
What are the lower and upper hearing limits of the human ear?
6
What causes the tonotopic organization of the inner ear?
8
Why is the human ear most sensitive to 4000 Hz tones?
0
How large are the inner ear hairs?
11
How does pressure travel through the cochlea exactly?
1
Would tinnitus be explained by perpetually-bent/opened hairs in the cochlea?