Hence, I interpret your question as "can a single, short stimulus delivered to a receptor generate multiple action potentials in the associated secondary neuron".

If sensory neurons were restricted to one action potential per stimulus, then a stimulus could only be detected in terms of its onset or offset. We can, however, sense prolonged stimuli. For example, we can perceive a continuous auditory tone and we can look at an image for extended periods without it fading away.

However, it all depends on the sensory system. A great example is the tactile system, where some receptors mediate prolonged sensations, whereas others only mediate onset or offset responses. Their associated secondary neurons are therefore classified as rapidly adapting and slowly adapting fibers.

Figure 1 shows the response profiles of various secondary neurons connected to different mechanoreceptors in the skin.

For example, the Pacinian corpuscle is a rapidly adapting mechanoreceptor. If it receives a static pressure difference, its associated neuron fires only a single action potential (or very few action potentials) at the start and end of the stimulus. Slowly adapting receptors causes their associated neurons to continue firing even after prolonged stimulation. Slowly adapting mechanoreceptors are Merkel's disks and Ruffini endings (fig. 2) 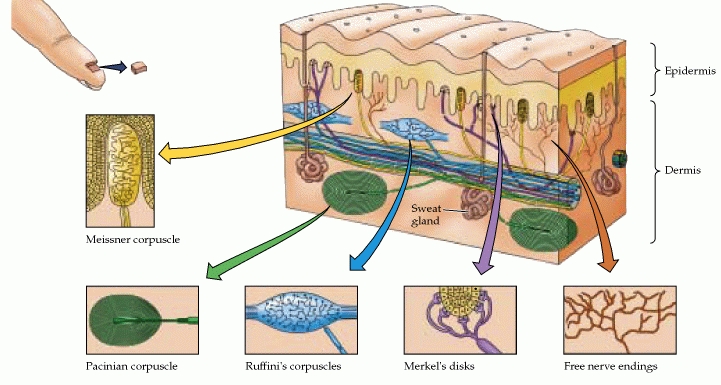 If you, however, mean with an 'instantaneous' stimulus a nearly infinitesimal short stimulus, then this question becomes a search for the shortest possible stimulus still capable of evoking a response in the secondary nerve fiber. In the auditory field, the shortest acoustic stimulus possible is probably the click stimulus, which is akin to a pulse stimulus. An acoustic click is hence about the shortest possible stimulus known to activate a sensory neuron. An acoustic click can be as short as 30 microseconds. A short stimulus like that, however, still evokes multiple action potentials in auditory nerve fibers (Parham et al., 1996). Admittedly, due to the mechanics of the inner ear, most notably the basilar membrane and the travelling wave the click evokes, the factual physiological stimulus may be longer, but in the auditory field at least, tens of microseconds is about as short as it gets.

Hence, I would answer "yes, instantaneous stimuli can evoke multiple action potentials in a given nerve fiber'.

If by 'nerve fiber' you mean a single neuron, the answer is definitely not.

The nerve can't 'remember' that the previous stimulus was particularly intense and fire again.

If by 'nerve fiber' you mean a bundle of neurons, the answer is almost certainly not. Maybe you could get some cross-talk where some neurons didn't fire and then further down the fiber the action potential 'jumped rails' and propagated back to the site of stimulus, maybe you could count that. I wouldn't rule it out but the layout of neurons would need to be really strange.

2
Do nerve cells cause action potential in cardiac muscle?
3
What is the direction of current flow in myelinated nerve cells?
6
What happens if nerve impulses go the wrong way?
10
How are neurons / synapses “biased”?
1
How greater magnitude implies greater frequency of action potential?
2
How are presynaptic burst firing signals transmitted post-synaptically?
2
What is the signal conversion from hair cells to cochlear nerve cells?
3
What happens in a nerve cell when a thought is generated?