Are some animals, like dogs and cats, color-blind and how do we know that?

I have heard that some animals, including dogs, cats and donkeys, are color-blind. They cannot recognize any color. Is that true? And how can humans verify that animals are color-blind, or not? During evolution, has color-blindness not bothered them at all?

TL;DR: We have a good physiological understanding of how eyes work, so by examination of other species' eyes, we can tell a lot about what colours they are capable of seeing.

First, a little bit about the physics of colour

Light is made of photons, and each photon has a wavelength. The distribution of wavelengths coming from sunlight looks like this (wavelengths on the x axis):

Any perceived 'colour' is some sort of summary of the wavelengths of the photons which get into an animal's eyes.

Now, a little about colour perception

There are cells in the eyes which respond to being hit by photons: these are called rods and cones. Colour vision is principally achieved using the cone cells, which have a peak sensitivity at one particular wavelength, and are less sensitive at other wavelengths. 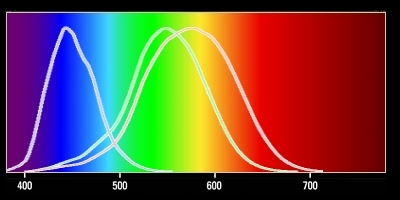 When cone trichromats perceive colour, what we're doing is taking the information on how active each of our different types of cone cell are, and using that to infer how many photons there are of each wavelength in the light that hits our eyes.

Of course, cone trichromats can't possibly summarise the whole diversity of wavelengths that are coming into their eyes using just three different measures of intensity - the line is way too complicated to summarise from three points. Also note that for humans, there is no cone cell that is sensitive above about 700 nm, or below about 400 nm. This means that we simply can't see differences in the infra-red or UV parts of the colour spectrum.

How does this all relate to colour-blindness in animals?

It is fairly simple to test the peak sensitivity of a cone cell: you take an eye from a freshly-dead animal, hook up an electrode to a cone cell, and then provide light of different wavelengths, and measure what wavelength causes the cell to 'fire' the most. If you repeat this with a large number of different cells, you can confidently determine how many different types of cone cell the animal has, and what wavelengths those cone cells are most sensitive to. This experiment (or similar ones) has been done for many different species, so we have a good background knowledge of what colours different species are capable of seeing.

Many species, including most non-primate mammals, have only two types of cone cell (i.e., they are cone di-chromats, as against non-colourblind humans, which are cone tri-chromats). This doesn't mean they see no colour, but it does limit the types of colour they are able to see. Many tools exist to simulate the visual ability of cone dichromats, for instance here, or here for browsers without flash support. These tools simulate human vision with different numbers of cone cell types. When comparing across species, it is important to remember that both the number of types of cone cell, and the peak sensitivity of each type, may be different, so the tools do not capture the full range of possible colour-perception abilities across species.

Does colourblindness present an evolutionary problem?

Not necessarily. Compared to cone tetrachromatic species, humans are 'colourblind', and it seems to have very little impact on our day-to-day survival. Similarly, most colourblind humans (i.e., with one or more types of cone cell disabled compared to non-colourblind humans) get along perfectly fine - a special test is needed to detect colourblindness in humans. If trichromatic vision gives no particular survival advantage, there is no reason to think that it will be favoured by evolution.

Background
I would like to complement bshane's excellent physiological perspective with a more behaviorally oriented answer.

Firstly, it is quite incorrect to say that dichromats can't see color. "Color blindness" is a deceptive term, since dichromats are not blind to colors, they are "blind" to some. For example, the most common type of color blindness, namely red-green color blindness (deuteranopia), is caused by the lack of green cones. Because of the red-green opponency in color vision, they have difficulties discerning greens and reds. However, they can see yellow and blues perfectly fine. Hence, 2 cone classes are sufficient to recognize colors, but missing a green cone simply results in reduced resolution in the long wavelengths.

Evolutionary, the added cone in trichromats is the medium-wavelength green cone. Trichromatic vision has evolved relatively late in evolution in New World Monkeys and is thought to have been beneficial to them to distinguish between ripe (red/yellow) and unripe (green) fruits, as their diet consists for an important part of fruits (Osorio & Vorobyev, 1996). Noteworthy is that trichromatism is more of an exception than a rule. Nocturnal animals are often monochromats, as rod-mediated vision is beneficial under scotopic conditions. Nocturnal species not only are not negatively impacted by a lack of color vision, they in fact benefit from it, because all of their retinal space is occupied by light-sensitive rods. The photon-hungry color-receptive cones need photopic conditions. Dichromats are the rule, while trichromatic vision is considered exceptional.

We can show trichromatic color vision in animals using behavioral experiments. Animals can be trained to perform color recognition tasks, like Munsell papers, that test the ability of the subject to recognize red, yellow–red, green–yellow, green, blue–green, blue, purple–blue, purple and red–purple colors. When the subject is able to succesfully recognize these colors, it is safe to say they are trichromats. For example, Munsell papers have been used to show that capuchin monkeys (Cebus apella) are trichromatic (Gomes et al., 2002).

Not the answer you're looking for? Browse other questions tagged evolution vision perception or ask your own question.

12
What really is color and how do we perceive it?
4
How can some animals see ultraviolet or infrared light?
2
How credible is the Remenko's two-component color vision theory?

8
Why are (some) cats attracted by bleach?
1
Genetically speaking, are dogs exactly similar to humans and chimps both?
17
Why do humans find baby animals cute?
13
Are there specific features of birds that cats/small predators are attracted to?
8
Theoretically, is domestication of (virtually) any animal possible?
2
Are domesticated animals really "more intelligent," or is that a myth/misunderstanding?
0
Genes related to senses and their variation across animals
7
Do color-blind people have more rod cells in their retinae than the normally sighted?
0
Are color-blind carriers partially colorblind?