Why does black and yellow indicate danger?

It is a well-known fact that combination of black and yellow indicates danger or poisonousness.

In western society it seems obvious this comes from bees and wasps, but it seems like many tropical frogs use yellow and black. Black and yellow also indicates toxicity in some fish species and the order of the colors seems to communicate whether we see a harmless milk snake or a venomous coral snake. 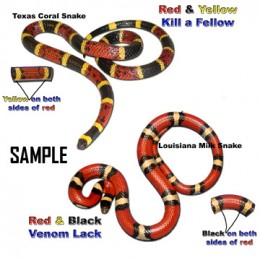 So which came first: the fear of black and yellow or the color of bees? Are there any studies about the color combinations effect on human brain? Is it learned or congenital?

First of all, great question! What you describe here is known as aposematism. Aposematism is the adapation of warning signals against the predator. This word is used for any sound, coloring, and odor used as a warning signal. Of course, for this question the focus is color.

Animal coloration is usually an honest indication of their noxiousness. The brighter they are, the more noxious and toxic they are (http://rspb.royalsocietypublishing.org/content/276/1658/871). In the linked article, there are many references one this positive correlation of toxicity of prey to predator and the brightness of the coloration. In the article they use mathematical models to support the mathemstical evidence. But one thing is for sure: bright colors do mean the prey is armed with defenses, whether the correlation is positive or not.

Why then is it black and yellow?

The conspicuousness of the coloration is very important because it is important to see from a far away distance. The reason colors like yellow and black are used is because (http://rspb.royalsocietypublishing.org/content/279/1728/417):

— They provide high contrast against the background (e.g. red/yellow against green foliage), which promotes detection.

— They are resistant to shadows (which are rich in blue-UV), and to changes in illumination (e.g. black should not change during day, whereas white could become ‘pink’ at sunset and sunrise). Therefore, they provide a reliable signal under varied habitats and light conditions.

— Yellow/red and black has both high chromatic and luminance contrast.

— Such colours may allow distance-dependent camouflage if yellow/red and black ‘blend’ to an average colour that matches the background at a distance when predator vision is no longer sufficient to discriminate individual marking components.

— Such colours are distinctive from profitable species.

What about the combination of black and yellow?

In the same article, they mention that:

Many warningly coloured prey have markings comprising repeated pattern elements. Such arrangements in signal structure may increase redundancy in the signal but improve the likelihood that the strategic component will be detected by the receiver. In addition, repeated elements may be rare in many natural environments, thus increasing conspicuousness of the prey animal. Simple pattern components (such as stripes and spots) may facilitate detection and also speed up avoidance learning if they are easier to memorize.

The research seem to show that the patterns, such as the stripes, lead to increased avoidance, but it is not sure whether or not it is due to the stripes itself or due to the constrast of the black and yellow.

I hope I have answered your question and if you have any questions, feel free to ask in the comments.

Sorry for the late response.... I think the short answer is Game Theory. Obviously any colour scheme could in principle be used to signal toxicity. However, if a scheme was chosen that did not stand out it would not be an Evolutionary Stable Strategy (ESS).

In game theory any signalling without an associated cost is known as "cheap talk". An example is where you go to an auction and before the bidding starts you go around telling everyone "I have a lot of money and I really want this item". No one will believe you because, well, you would have said that wouldn't you! However, if before the bidding starts you pull out a Havana cigar and light it with a $100 note, that's not cheap talk, and will probably cause a number of your competitors to quietly back off.

Not the answer you're looking for? Browse other questions tagged entomology toxicology sensation psychology optics or ask your own question.

10
Small yellow bug with black head and three black stripes on the back
1
What kind of beetle is this? (Black and yellow)
18
Black insect with antennas and large abdomen
2
Why does white light viewed through optical chopper appear purple/blue?
6
Large nocturnal butterfly with red and black hindwings
2
Identification of that red and black bug
4
Europe: big fly with black/yellow striped body: I'm guessing a horse fly?
0
Why do we see colours when we close our eyes and press our hands against them?
4
Identify this black dragonfly with bluish coloration along its flat top, yellow on it's mid-body and green on its head