Why are female not competitive for reproduction like males?

I have wondered if competition for mate among males and the race among sperm cells would result in healthy offspring,

why no such mechanisms exist among females and egg cells?

(Even females are genetically responsible for the offspring.)

The reason for this discrepancy is mainly explained by Bateman's principle. Citing wikipedia:

Bateman's principle suggests that in most species, variability in reproductive success, or "reproductive variance," is greater in males than in females. This is ultimately a consequent of anisogamy. Females, especially mammalian females, almost always invest more energy into producing offspring than males invest. Bateman's principle anticipated and is consistent with Robert Trivers's theory of Parental investment—in most species females are a limiting factor over which males will compete. This competition results in some males being more successful than others, leading to greater reproductive variance among males than females

Actually there are lot of examples in which females are competing for mating which also have evolutionary consequences. It is also widely spread in nature. This competition may arise at cellular, molecular, genetic, behavioral level. Quoting from (Stockley and Bro-Jørgensen 2011)

female competition is associated with many diverse adaptations, from overtly aggressive behaviour, weaponry, and conspicuous sexual signals to subtle and often complex social behaviour involving olfactory signalling, alliance formation, altruism and spite, and even cases where individuals appear to inhibit their own reproduction. 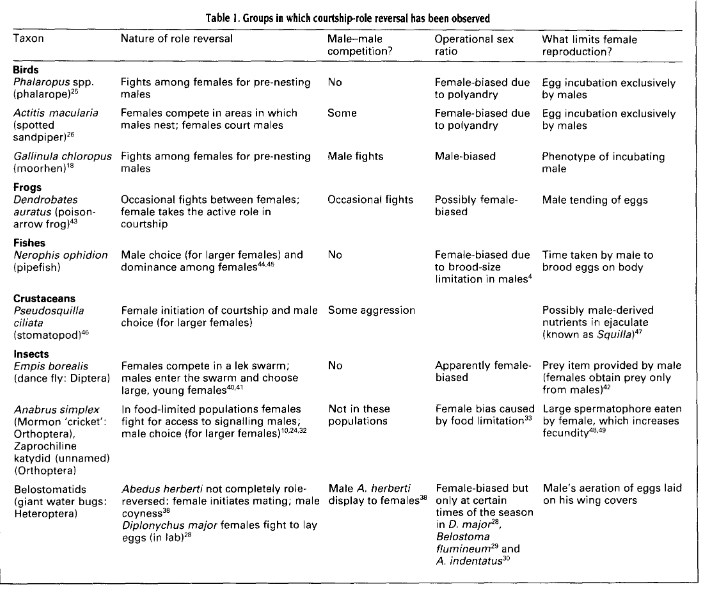 There are many more you can find by just searching on pubmed!

According to https://www.dailymotion.com/video/x1e19qg_bonobo-ape-our-closest-relative-nature-documentary_tech, bonobos are also peaceful. All the members of a group have sex with each other all the time and no male knows which baby is his removing the advantage in males fighting. They're probably also peaceful for a similar reason, that those that fight back to not get less than their fair share of food are selected for which in turn causes those that fight to get more than their fair share to be selected against.

Not the answer you're looking for? Browse other questions tagged genetics reproduction or ask your own question.

4
Why do female humans invest more in parental care than male humans, from an evolutionary standpoint?
0
Why is sex hurtful for some animals but pleasurable for others?
2
Are there animal species in which the females expend more energy attracting males than in their offspring?

5
What is the inbreeding coefficient for the female offspring of a sib-mating in a haplodiploid system?
2
Definition of Sexual Selection?
33
What's the difference between male and female?
2
Why are de novo genetic mutations usually NOT inherited?
7
Is human "sperm warfare" a concept supported by biology?
2
Are there animal species in which the females expend more energy attracting males than in their offspring?
3
Could two women have a child through artificial insemination/genetic engineering?
0
Does amount of sperm affect fitness of baby?
0
Does a reproductively successful male have the same genetics as a reproductively successful female?