In Type 1 hypersensitivity how do B lymphocytes switch Ig classes, from synthesizing IgG to IgE? What is the mechanism? I studied multiple pathology books, it says the same as for IgG secreting pathway. So how does the body know how to change the Ig secretions in response to allergens?

In T-dependent antigen recognition, the B cell can switch the isotype by first altering the heavy chain gene. This is driven by Tfh cells. The specific cytokine stimulating the class switch determines the isotype of the heavy chain to be synthesized. For your example, interleukin 4 (IL-4) drives the class switch to IgE. You also need a costimulatory signal from the CD40/CD40L interaction between the B cell and the Tfh cell. This induces activation-induced deaminase (AID), see bottom paragraph on this.

There are switch regions (denoted S) in the introns between J and C segments at the 5' end of each CH locus, and upstream of that is an I exon (region denoted I) w/ it's own promoter. Induction by CD40 and whatever cytokine is present starts transcription of the I exon, switch region and CH chain of the H-chain the B cell is meant to switch to. This germline transcript facilitates dsDNA breaks at the switch regions Sµ for the IgM (switch region mu) and the switch region for the class to be switched to, Sε in our case for IgE. The intervening DNA is deleted and the coding region Cµ is replaced by Cε coding for the IgE heavy chain BUT, it ends up with the same V domain as the B cell originally had!

I'd also be careful with the terminology plasma cell as used in the title because we aren't yet at the high-affinity secreting stage when we're talking about class switching. This is mediated at the activation of the actual B cell by Tfh cells. 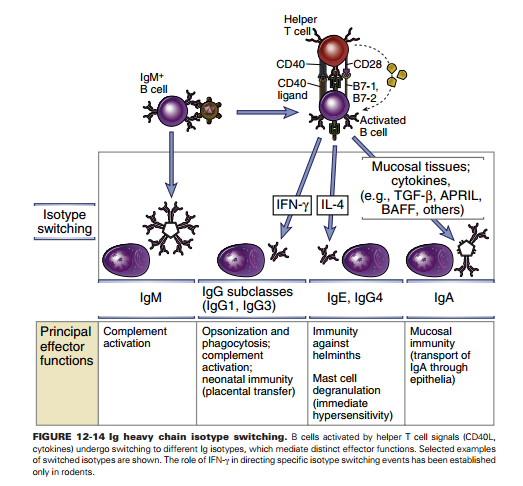 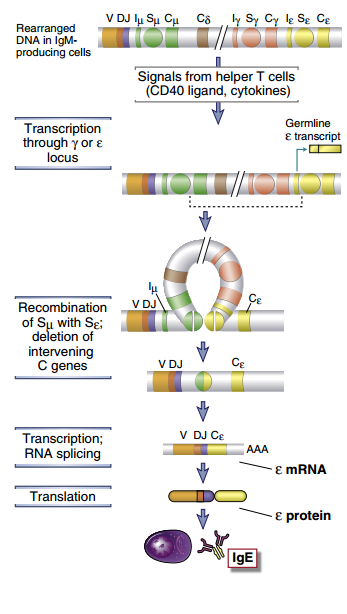 All information above is summarized from Cellular and Molecular Immunology, 8th ED

Not the answer you're looking for? Browse other questions tagged immunology pathology antibody hypersensitivity or ask your own question.

3
Where do the antibodies that trigger the specific immune response come from?
4
B-cell antibody production

4
Plasma cells and memory cells
3
How do B memory cells provide immunological memory? Do they differentiate into plasma cells?
3
Hypersensitivity Simultaneously in Ear canals
1
Why is the penicillin/ceftriaxone hypersensitivity test only done once?
3
Does class switching occur both in B cells and Plasma cells?
2
What do we mean by MHC molecule diversity? Does each human have a variety of MHC molecule isoforms?
1
How to identify plasma cells that only produce monoclonal antibodies?