Why do snakes not have eyelids?

Why is it that snakes do not have eyelids?

Is it due to that fact that they are not as evolved as we humans and other organisms that have eye lids, or is there any other significance behind it if any?

Snakes have no eyelids. Each eye is covered with a single, transparent scale. These eye scales protect the eyes from mechanical damage, and prevent the eyes from drying out, just as an eye lid would do. In effect, snakes developed another solution to protect their eyes.

As a result, snakes cannot blink and they sleep with their eyes open.

A snake’s eye scales are part of its skin. This means that when a snake sheds its skin, it must also shed its eye scales. When it is time for shedding, the eye scale turns opaque, reducing vision (Fig. 1). 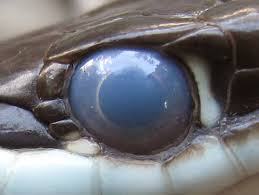 I don't know WHY snakes have no eyelids, but the lack of eyelids doesn't mean they aren't as highly evolved as animals that do have eyelids. Rather, snakes simply followed their own evolutionary path.

Whether or not snakes have eyelids may be a matter of perspective. According to this article, snakes' eyelids have evolved together into a single transparent scale called a brille.

I'll venture a couple guess to explain WHY this trait evolved. 1) Eyelids may have posed a special problem when molting. 2) Since snakes are extremely long and narrow, they're well adapted to crawling through tight spaces, into holes, etc. Eyelids could be a nuisance in such situations; imagine them getting clogged with dirt, for example.

Small, burrowing mammals typically have very tiny eyes; I believe some are blind, or nearly so. But what about their eyelids?

I haven't researched it in depth, but a cursory search revealed this clue: "Grant's golden moles have no pinnae and have poorly developed eyes, with fused eyelids covered with skin."

Not the answer you're looking for? Browse other questions tagged evolution eyes anatomy or ask your own question.

2
Are we "more evolved" than present-day bacteria?

16
What is the difference between a circular and a cat's-eye (slit) pupil?
6
Why is a slow worm not considered a snake?
15
Why is venom more common in fish and snakes than other vertebrates?
15
Why have parasites not evolved to be harmless?
7
What is the rest state for eyelids - Open or Closed?
0
Why do death cap mushrooms not warn of their poison?
0
Darwinism and the idea of being too successful