If oxygen is such a good energy source, why do plants release it?

Why do plants release excess oxygen, rather than consuming it entirely given it is an excellent energy source?

Short answer
Plants release O2, because it is not an energy source. Instead, it is used to free energy from energy-rich organic compounds.

Background
Plants are solar powered. They release oxygen as a waste product during carbon fixation. Carbon fixation is basically the storage of solar power into carbon-bonds in glucose, a process referred to as photosynthesis or the Calvin Cycle.

To release the solar energy from glucose it has to be burned (oxidized). Oxidation of glucose can be realized via the the citric acid cycle (or Krebs cycle) and electron transport chain to generate ATP. O2 only comes in in the very last step by acting as the final electron acceptor to produce H2O (Fig. 1.) 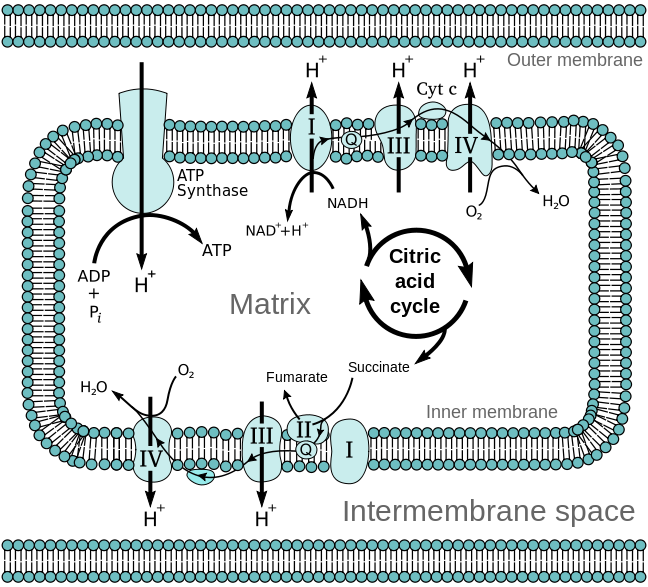 Fig. 1. Electron transport chain in mitochondria. Electrons are sent through a chain of proteins that drive hydrogen transport out of the mitochondrial space. ATP-synthase uses the proton gradient to generate ATP. Source: Davis University College

Hence, O2 is not the source of energy, it is merely used to free it from energy rich compounds such as glucose. Because it is so abundant in the atmosphere, it doesn't make sense to store it.

Not the answer you're looking for? Browse other questions tagged evolution botany energy or ask your own question.

11
What's the effect of oxygen deficit on plants?
0
Why can we breathe only oxygen?
3
Why cannot machines use energy stored in a way similar to biological systems' energy storage?