The first sounds like it doesn’t involve vitamin A at all and just recycles the retinal. Hence it wouldn’t be affected by any vitamin A deficiency, yet we know vitamin A deficiency affects the stock of retinal in the eye. Yet I don’t see any disadvantages in simply recycling our retinal; why would we go through the process of converting it to vitamin A and then back to 11-cis-retinal?

Short answer
A complex visual cycle in vertebrates involving vitamin A is useful for storage, re-distribution of retinoids to both rods and cones, to improve photosensitivity and reduce noise in the visual system.

Background
The visual cycle in mammalian rods is depicted in Fig. 1. 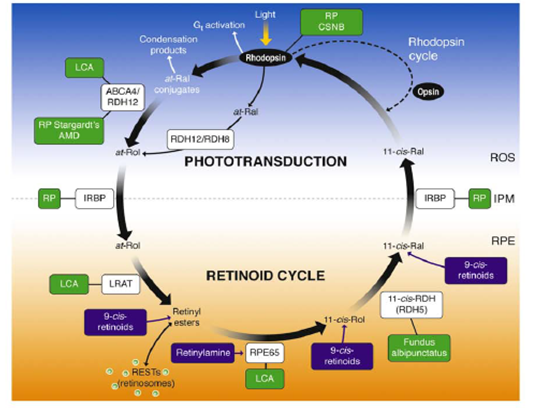 11-cis-retinal isomerizes to all-trans retinal by absorption of a photon. Your notion that this pathway can involve direct re-isomerization back to 11-cis-retinal is only true for invertebrates. They simply absorb another photon to back-isomerize all-trans to 11-cis (Saari, 2012).

In vertebrates, however, this bi-stable configuration is replaced by a complex visual cycle (or retinoid cycle, Fig. 1). The reason is that the bi-stable invertebrate system is less sensitive, as photons used for regeneration cannot be used to initiate phototransduction. Moreover, the invertebrate system is more prone to noise, as photons can both start the phototransduction or recycle all-trans retinal (Saari, 2012).

In vertebrates it is thought that the visual cycle only emerged after appearance of the cone system (Saari, 2012). Notably, the visual cycle depends on the retinal pigment epithelum (RPE), as shown if Fig.2. 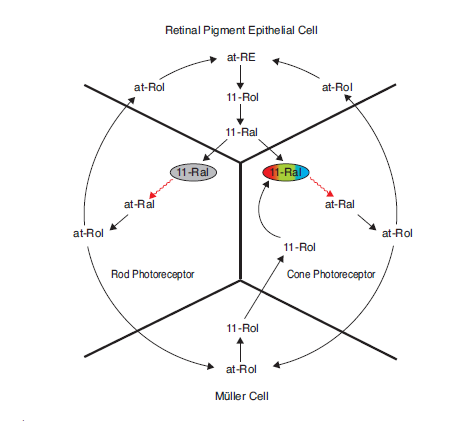 Fig. 2 shows that vitamin A (all-trans-retinol) is present in the RPE. RPE cells are able to store vitamin A by converting it to fatty acids and store it in oil droplets. Moreover, RPE cells can funnel this stored vitamin A to both rods and cones, another reason why the complex visual cycle and vitamin A conversion makes sense (Palczewski, 2010)

Not the answer you're looking for? Browse other questions tagged biochemistry neuroscience vision neurophysiology or ask your own question.

7
Determining if a specific proline is cis or trans in the protein?
5
Why plants (eg. parsley) can keep vitamin C despite all the sun?
1
What difference do trans and cis configurations of amide groups bring to the polypeptide chain?
2
In vivo, does it take energy to move double bonds from cis to trans in long chain unsaturated fatty acids