How does the modern synthesis theory explain the evolution of birds from dinosaurs? [closed]

The theory of evolution claims that birds evolved from dinosaurs only by mutation, genetic drift, migration and natural selection.

However, it seems to me that wings were not selectively advantageous for dinosaurs.

Would you show me a book or a paper which explains this point in detail with academic accuracy? Level of the book or the paper should have detailed information for an advanced reader.

First of all, dinosaurs did not evolve to birds. A better way of saying it is that modern birds evolved from a particular type of dinosaur. That, however, is not the same as the blanket statement "dinosaurs evolved to birds". The latter implies that dinosaurs somehow morphed into birds and stopped being dinosaurs. What actually happens is that a species starts changing and, eventually, a sub-population of that species has changed so much that we call it a new species. It is a subtle distinction but important.

As for a specific paper, no we don't have anything like that for any specific examples. What we have is a huge collection of observations all of which point to the process of speciation occurring via the processes of mutation and natural selection. It's impossible to know the precise series of mutations that led to the creation of a new species for a variety of reasons.

All we have is the current species. If we know an ancestor, we can deduce a possible path that leads from the genome of the ancestor to the genome of the target species but we have no way of knowing whether that specific path was followed. For an analogy, consider computers. If I were to give you a modern desktop PC and one of the first computers: 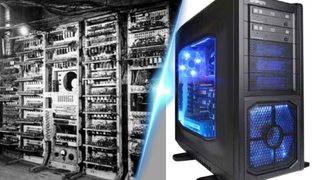 You might be able to guess certain changes that were made to the old ones in order to build something like the new ones but would you be able to figure out every single step along the way? How would you detect all the attempts that failed? The ideas that didn't pan out? Would you be able to infer the existence of floppy disks, for example?

The same problem applies to species. It is essentially impossible to infer the precise series of mutations that led species B to split from species A. Especially since, usually, this happens through species A.1, A.2, A.2.1, A.3 etc, and all we have is species B.

Add to that the fact that evolution is not a linear process, there are many dead ends (way more than in computers), and the story gets even harder to understand. This graphic illustrates it quite well: 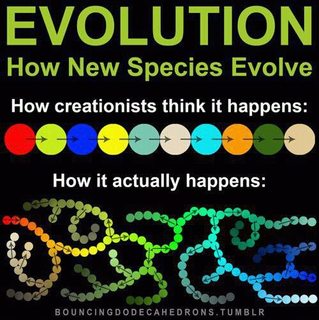 Obviously, if you have the first red dot on the far left and the last blue on on the far right, it will be impossible to infer the entire evolutionary history linking these species.

So, with this in mind, given that dinosaurs and birds share a common ancestor, it is essentially impossible to get the full, true, path that led from that ancestor to either dinosaurs or birds. More importantly, as shown in the image above, dinosaurs did not evolve into birds in the first place so the question is moot.

Not the answer you're looking for? Browse other questions tagged evolution natural-selection ornithology book-recommendation palaeontology or ask your own question.

29
Human evolution: Where *exactly* did the first human come from, whose parents were not?
7
Is the theory of evolution being disproved by bats?
22
If dinosaurs could have feathers, would they still be reptiles?