I keep seeing the Nernst equation in two different forms, one using the natural log and the other using log base 10. Could someone explain why there are two different versions, and which should be used? Thank you in advance.

Since you tagged this with neuroscience, I'm going to assume the two forms you see are these: 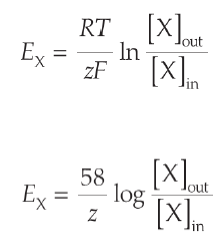 The top one is what you might call the "no assumptions form". Temperature is left as a variable, T, and will have to be plugged in, and one will also have to plug in the gas constant (R), Faraday's constant (F), and the valence (z) of the ion (X) in question when you solve the equation.

The bottom one could be called the "handy assumptions form", or simpler form. Temperature has already been plugged into the equation as room temperature (for early experiments, they probably measured at that...this is what is used here) or body temperature, the values for the constants are plugged in, and the valence of "X" is assumed to be +1 (such as for Na+ or K+), so the math of doing all that results in this other form, with the number 58 in it.

The conversion from the natural logarithm ("ln") to the base 10 logarithm ("log") is part of that transformation. As commenters mentioned, the conversion factor is ~2.3026 between the two. So that number is factored in, but so are all the other values.

Not the answer you're looking for? Browse other questions tagged neuroscience brain neurophysiology or ask your own question.

7
What is the difference between different brain regions
2
Is severe but short-term pain worse than moderate but prolonged pain for the body?
4
Action potential changes in low sodium concentrations but constant osmotic pressure
10
What is the mechanism behind tinnitus?
5
How does de-myelination occur in multiple sclerosis?
5
Why is it possible to calculate the equilibrium potential of an ion using the Nernst equation from empirical measurements in the cell at rest?
6
Why Goldman Equation cannot be used to calculate dynamic changes of membrane potential
1
Assumptions for Nernst Equation
1
Does the cranial dura consist of the periosteum? and if not, then is there a mistake in my textbook?