What is the function of the human eye white?

If you have a look at the eyes of most animals, you never see the white part unless the eyes are averted. In contrast, humans always have the whites visible because the iris is quite small. The only explanation I found so far is that the evolution made it this way because we are very social animals and we express a lot by eyes movements. I wonder if there is any other explanation?

Short answer
The relative large surface area of the white sclera in humans has been linked to an enhanced ability to detect eye gaze.

Background
The white of the eye is caused by the sclera. Human eyes indeed have the highest relative amount of visibly exposed white sclera. The amount of visible sclera provides information about the orientation of the eyeball. Specifically, the iris-to-sclera ratio is an important cue for eye gaze perception (Schulze et al., 2013).

Eye gaze is important. Most mammals generally interpret direct gaze as threatening, or as a sign of dominance. Humans, in contrast, tend to associate mutual gaze with positive interest, love and attraction. A preference for direct gaze seems to be present at a very early age. Infants as young as 2 days old prefer to look at faces that gazed directly at them, than to faces with averted gaze. Yet, humans sometimes find eye contact uncomfortable, for example if a stranger keeps staring at them (Schulze et al., 2013).

The ability to detect gaze has been established in many primate species, other than humans. Gaze detection may have evolved because direct gaze can signal that a predator is attending, making its detection an important tool for survival. Many animal species respond to the presence of staring eyes with displays of fear and submission, indicating that such stimuli act as warning signal. In humans, prolonged eye contact can also be perceived as an aggressive approach signal, as it leads to increases in galvanic skin response (Frischen et al., 2007).

The cooperative eye hypothesis assumes that the large scleral surface in humans developed especially for gaze detection (Tomasello et al., 2007). The authors base this conclusion on the fact that human infants mainly followed gaze, while several species of great apes (including gorillas and bonobos, but not macaques) mainly followed head movements.

However, from my humble opinion, concluding that humans developed a large relative surface of white sclera for communication purposes is kind of far-stretched. For one thing, macaques also have quite a large white scleral surface (Fig. 1.) and macaques share a dedicated neural circuit with humans that involves the superior temporal sulcus (STS). The STS is thought to process biological motion, including gaze. The STS projects to the amygdala, a structure of the limbic system that implicated in the processing of the emotional content of stimuli, including facial expressions and gaze detection. It links this information to emotional responses in the observer. There are also connections between STS and the intraparietal sulcus, an area that is associated with spatial processing and shifts of attention. Via these connections, information about eye-gaze direction could project to spatial attention systems to initiate orienting of attention in the corresponding direction, as in joint attention. Indeed, passive viewing of a face with averted gaze elicits a stronger response in the IPS than viewing a face with direct gaze (Frischen et al., 2007). 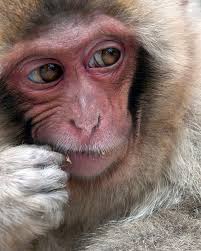 Personally, from these data I think the brain in humans and primates like the macaques adapted to process the information available from the eyes. It can be true, however, that brain circuits and eye structures developed/evolved in parallel to ultimately result in a large white scleral surface and a dedicated neural circuit to process its information.

-1
Do any dogs have blue iris - not just sclera?