PCR uses cycles of heating and cooling to denature the strands, calling for special thermostable DNA polymerases. In a cell, during replication, Helicase unwinds the DNA without the requirement of heat. Can Helicase be used instead of the heat cycling to achieve single stranded dna? Would that eliminate the need for heat cycling, and hence special thermostable polymerases?

Edited after clarifications in question,

Watch this animation, it will clear your doubts about function. However, RNA polymerase does have both activities.

In cells, helicase action is required to separate DNA strands. After that only polymerase can act. During PCR, separation of strands is done by increasing the temperature. This process is called DNA melting. This temperature is generally very high, around $90^oC$ to $100^oC$ depending on your sequence. At this temperature many proteins will not function, hence you need thermostable polymarase. About 40 years ago, such an enzyme was discovered from extremophiles (Chien et al 1976). Now it is commercially available as Taq polymerase. These enzymes are recombinant proteins with a few mutations which have also increased its yield and stability (Villbrandt et al 1997).

Now coming to your main question (Which I think I understood correctly this time).

The concept you are asking about has already been successfully tested in RNA detection. Researchers have used "Isothermal reverse transcription thermophilic helicase-dependent amplification"(Goldmeyer et al 2007). They used not only helicase but also reverse transcriptase (because they were detecting RNA). The following image (taken from the paper) shows the main steps in this process. Circles indicate DNA polymerase, squares indicate reverse transcriptase, and triangles indicate helicase. 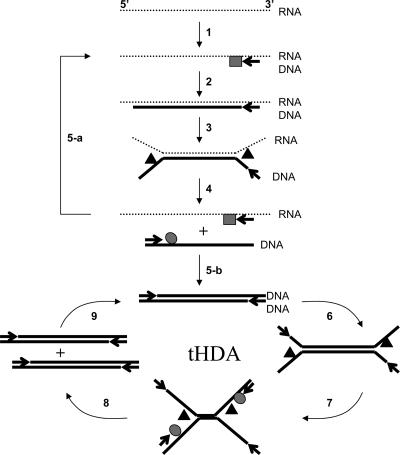 Quoting from the paper (bullet points are mine),

Isothermal DNA amplification technologies have been developed. You do not need thermal cycling to amplify DNA fragments by this method.