Why do some trees in California have dead brown leaves but also new green leaves?

It's Autumn 2015, and I just saw a tree that had mainly dead brown leaves but also some new small green leaves growing. Why didn't the tree just keep its old leaves? Does it think we are in spring already?

EDIT: To be clear, I had always thought that in autumn that all the leaves of a tree would fall off together, as a preparation for winter. It seems silly that the tree would then immediately grow some new leaves when it just decided to let all those previous leaves die. Why not just use that same energy to maintain those leaves?

I've taken some photos of the leaves and the trunk for help with identification. 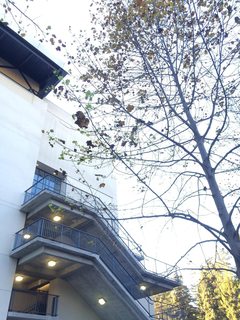 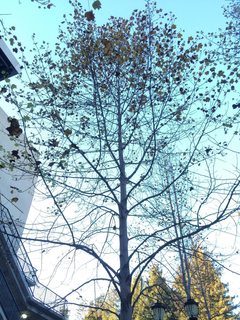 Whether trees are deciduous or evergreen, their leaves don't last forever; they need to be replaced at intervals. The process of photosynthesis depletes the chlorophyll in the leaves, so that needs to be replaced and this is a significant metabolic cost to the tree. Therefore, whenever a tree is experiencing metabolic stress, it will slow down the chlorophyll replacement, and let the leaves die to save energy. It's metabolically cheaper to simply let the leaves die -- after removing the most precious nutrients -- and then regrow new leaves as needed, than to keep repairing the leaves that aren't needed because the tree is resting for other reasons.

In temperate areas, where there are well-defined seasons, this typically happens in the fall, and deciduous trees let their leaves die all at once in the fall. In tropical or subtropical regions, where trees could photosynthesize all year, leaves may drop all year round (as with evergreen trees, like conifers, in temperate regions). Often, though, their leaves will reflect metabolic stresses on the tree, such as drought.

(The Wikipedia article on "Deciduous" makes the point that this can be very localized, related to very local environmental differences that could only affect a single tree.)

Much of California is a subtropical region, and it has been experiencing severe drought for some time, so it wouldn't be surprising for a tree to have reached a point where its leaves have all had their chlorophyll removed. On the other hand, as the El Nino event of 2015 increases, rainfall in California is returning, so it would also not be surprising for a tree to have recovered from drought enough to start making new leaves.

If your question is why the old leaves didn't fall off before the new ones started to regrow, it is probably simply a matter of timing. The tree doesn't really "care" if the leaves fall or not, so long as they're not using up its resources, so there's no reason to force them off. The new water supply may have arrived fairly shortly after the degree of drought that caused the tree to shut down the leaves.

Depending on the part of California, most deciduous trees will go through the customary winter-dormancy cycle as is seen throughout the rest of the planet, albeit often majorly abbreviated. Even as far south as Needles many "eastern hardwoods" that had been planted by landowners will dutifully drop their leaves as winter approaches, renewing their greenery he following spring.

The problem you mentioned is not restricted to California: Deciduous trees and shrubs facing severe and/or prolonged drought conditions will "go dormant" earlier than would be normal. This is a simple "survival strategy," in which the plant reduces the potential for long-term injury or harm by---in effect---hibernating. Nature has built this survival strategy into a wide range of life-forms; periods of crisis-dormancy allows the subjects to "weather" adverse conditions and, "hopefully," revive when the previously-experienced problems had passed.

I've noted deciduous plants going through leaf-drop as early as July, in New York State. Recently-planted deciduous trees and shrubs do not have the extensive root-systems of established plants, and will quite often go through early leaf-drop because they will feel the effects of a drought far more keenly than established plants. That is not to suggest that your trees or shrubs were recent plantings: It is merely a statement of fact.

A curious thing about early-dormancy is that plants will "rebound" and set new leaves---essentially, sending forth some of the leaves that had been grown for next year's spring and summer cycle.

This will come about when there has been a very recent period of increased rainfall, coupled with cooler ambient temperatures.

If you will check the recent weather-tables for California, you will note this is exactly what happened: A long, hot, period of zero precipitation and arid humidity was broken by an interval of cooler and more-moist weather, going into late-summer and fall.

The California hardwoods had "rebounded," setting a reduced number of new leaves and, essentially, tried to make up for the brutal conditions of the previous spring and summer by getting a few more weeks of photosynthesis and growth before Autumn arrived without doubt, and the cycles of shorter days and reduced temperatures obliged the plants to enter "true" dormancy.

My 12-15 hours of "Dendrology" (the study of trees) were taken nearly five decades ago, although I'd striven to maintain a B+, even in "Science electives." Besides, I'd really enjoyed "woodsy" courses as it allowed me another valid excuse to "prowl the pines & ramble the brambles!"

Not the answer you're looking for? Browse other questions tagged ecology trees or ask your own question.

16
Australian Tree Identification - maybe pine?
16
Why are these trees leaning, but no trees around them are?
15
Spruce growing high up in a maple trunk: Can a partially rotted trunk completely sustain another tree?
10
What kind of tree is this — why do its huge leaves change shape and "grow fingers"?
0
Why do some trees hold their leaves through fall and winter?
2
Why does a lightsource postpone the time it takes for the leaves falling from a birch tree?
4
Is it unusual for populations of archaea to be found living inside trees?
1
why do some trees have trunks that branch out and others don't?