How are cardiac cells stimulated by an action potential?

If you go to probably any physiology textbook and look at the chapter on cardiac action potentials, you'll find a number of diagrams of the different ion permeabilities and channels in the heart (e.g. fast sodium channels, calcium channels, etc) that lead to the depolarization of the cardiac myocyte. As you alluded to in your question, there is one cell, or group of cells, that is part of the sinoatrial node (or SA node) that is referred to as the "Pacemaker of the Heart". It is these cells in the SA node that have the leakiest ion channels and thus most frequent spontaneous depolarizations that set the rate of contraction for the heart.

For the cells in the atrium, the depolarization of the sinoatrial node spreads almost instantaneously across the atria because of gap junctions (see that link for more info...Michela et al. Role of connexin 43 in cardiovascular diseases. European Journal of Pharmacology, 2015) between the cardiac myocytes. Gap junctions are small communicating junctions that link all the cells of the atrium and "electrically-couple" the cells to contract in synchrony. There are typically no gap junctions between the atria and the ventricles, which is why the atria contracts before the ventricles. However, there is the bundle of His that slows the electrical conduction just enough before it rapidly spreads through the purkinje fibers and then to the remaining ventricular myocytes through gap junctions in those cells as well.

**For more information on gap junctions go to any basic cell biology text or Wiki. The picture below is a simplified diagram of gap junctions. For this question all you really need to appreciate is that the electrical depolarization (i.e. the positive charge) spreads quickly across cells connected by gap junctions because they are 'sharing' a common cytoplasm due to these channels. When ions flux during depolarization that current flows through the gap junctions and nearly instantaneously depolarizes the next cell... and so on, and so forth. 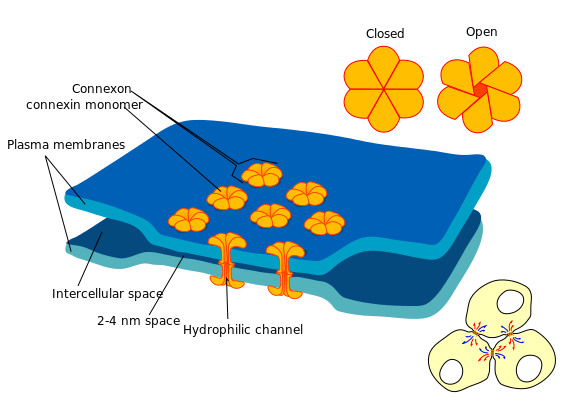 Not the answer you're looking for? Browse other questions tagged human-biology cell-biology cardiology electrophysiology or ask your own question.