What is the instructional language of DNA?

DNA carries most of the genetic instructions used in the development, functioning and reproduction of all known living organisms and many viruses (Wikipedia).

Is it already know how ATCG's sequences create theses instructions? Or equivalently, what is the instructional language of DNA? My interest in this question is to know if we already understand how ATCG's sequences can create, for example, human epidermis with an excess of a determined mineral or change cell's shape for more fundamental geometrical ones (triangles, rectangles, diamonds, etc.).

Please, forgive me for this foolish question: I'm not a biologist.

This language is called the genetic code. But before talking about this specific code, it is important to talk about how the code is read. Please note that the below answer is a simplification of the reality.

Mechanism by which the code is read

To make things easier (reality is a little more complicated), DNA is "formatted" into RNA which is then "formatted" into proteins. When "formatting" occurs, we do not lose the previous format but we only copied the information into a new format. The formatting from DNA to RNA is called transcription and the formatting from RNA to proteins is called translation.

Proteins are the active units that affect cell activities. The activity of the proteins is a function of their sequence. As a consequence the language/code we must understand is the relationship between DNA and proteins.

DNA, as you said, is written in quaternary (=numeric system at base 4). The four letters are called A, T, C and G which stands for Adenine, Thymine, Cytosine and Guanine (4 nucleotides).

Below is the code: 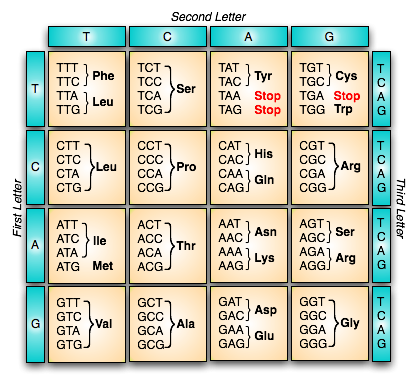 , where Phe, Leu, Ser, etc... are an abbreviation for specific amino acids. Phe for example is the phenylallanine.

As you can see in the above table, most of the redundancy is caused by changes in the third letter of the codon. More information on why it is the case on this post.

There are 4 special codons.

The unidirectional relationship between DNA, RNA and proteins has been called Central Dogma of Molecular Biology. Of course, there is no place for dogma in science and the term is very improperly used. Interestingly enough, the Central Dogma of Molecular Biology is partially wrong because this relationship between DNA, RNA and proteins is not necessarily unidirectional. The reverse transcriptase is an enzyme that reformats DNA from RNA.

Not all RNA are meant to be translated into proteins. Only mRNA (m stands for "messenger") are. For example, the process of translation is itself catalyzed by RNA (called rRNA, where "r" stands for "ribosomial")

Note also that DNA is first transcribed into pre-mRNA which is then modified into mRNA before being translated.

Is all of DNA transcribed?

No. In eukaryotes (which include pretty much all the living things you may think of to the exception of bacteria and viruses), most of the DNA is not transcribed. The rest is used for regulatory purposes or might not be used at all. The regions (called locus/loci) of the DNA that is being transcribed are called genes

Not the answer you're looking for? Browse other questions tagged genetics dna gene-expression or ask your own question.

9
Evolution of the Redundancy of the Genetic Code
2
From DNA to final traits of microorganisms?

36
What is the advantage of circular DNA in bacteria?
4
What triggers DNA to produce proteins?
6
Can DNA & RNA be considered as nature's programming language?
5
What are the major causes of mutations in DNA?
7
Do DNA repressors exist?
5
What is the number of DNA strands per cell?
2
What happens to the complementary base when the other undergoes a base substitution mutation?