Are carbohydrates an essential component of human diet?

Are people able to satisfy all the needs of a healthy diet without consuming carbohydrates?

My question includes the assumption that a person has no health condition that would prevent them from meeting their caloric needs with only fat and protein.

I'm also not asking about the practicality of eliminating all carbohydrates. If a person could consume no carbohydrates whatsoever, this other question would clearly matter a lot, but I'm not asking it.

If there are essential dietary components that happen to be carbohydrates, but are not converted into glucose, I'll say up front that it wouldn't satisfy what I"m asking. However, it would be interesting footnote on an otherwise correct answer.

From a theoretical perspective this is a very interesting question, mostly because it is difficult to completely abstain from carbohydrate intake on a normal diet. Even the popular low carb diets of the late 1990s and early 2000s (e.g. Atkins Diet, South Beach Diet) were just that, they were Low Carb, Not No Carb.

We know there are essential dietary nutrients for humans, like essential fatty acids and essential amino acids. The reason that these must be obtained in the diet is because humans do not have the enzymes to synthesize these nutrients de novo (aka, "From Scratch").

From a biochemical perspective we know that fatty acids and acetyl-CoA cannot be converted back into glucose or other carbohydrate intermediates. This is because of the irreversible biochemical reaction catalyzed by pyruvate dehydrogenase, which converts pyruvate to acetyl-CoA. Thus, fatty acids (lipids) can be oxidized to acetyl-CoA (for the TCA/Krebs Cycle) but cannot be further converted to glucose within the body.

As stated in the editorial noted in the comments of this question (From the American Journal of Clinical Nutrition), there are daily "requirements" for carbohydrates. However, it does not appear that any diseases are unmasked by very low to zero carbohydrate absorption (which is most closely occurs in the Inuit populations whose diet is entirely fat and protein).

So, if you ask the question "are carbohydrates essential components of a human diet?" the answer would be probably not. However, as mentioned above, carbohydrates are ubiquitous and it is impossible to abstain from all carbohydrate intake.

Below is a picture freely available online from this website (from Lehninger Principles of Biochemistry, 5th Edition) of the glucogenic and ketogenic amino acids and the metabolic intermediates to which they can be converted. This is how Krebs Cycle intermediates can be generated from amino acids and are not dependent on dietary carbohydrates. 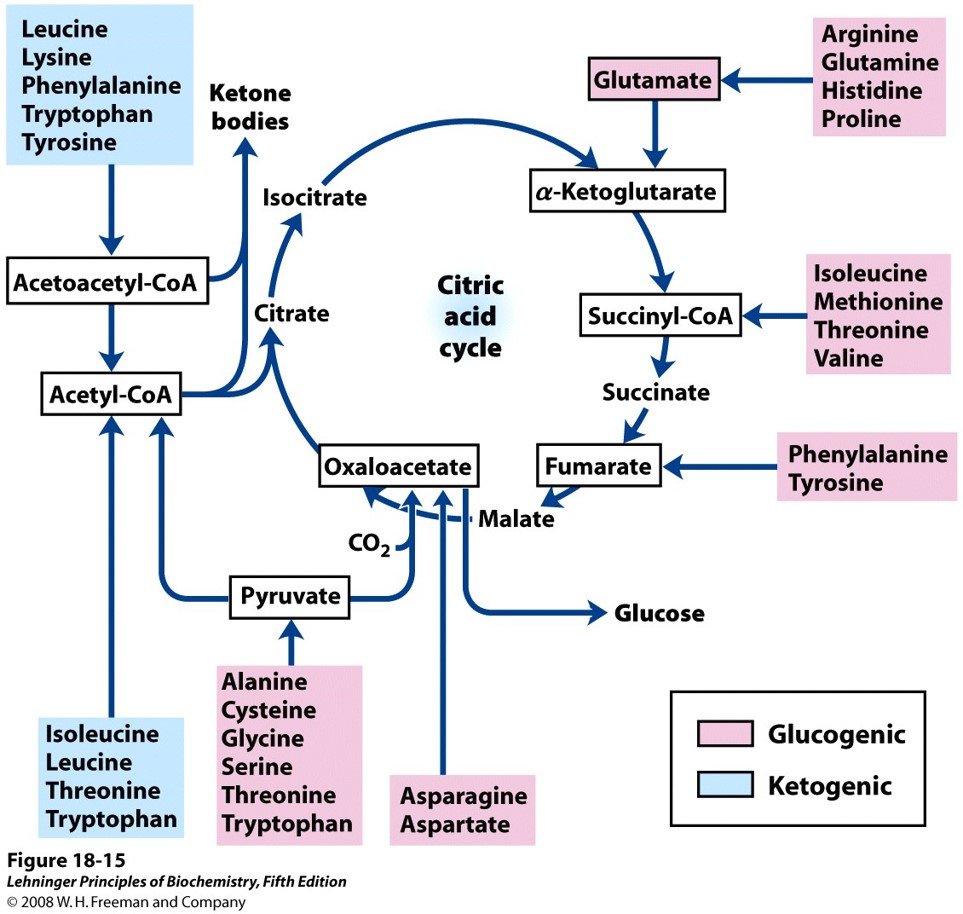 1
Can a human being live without any carbohydrates?
0
Co-dependency between carbohydrates, fats and protein in the mammalian diet?

2
Why are Taurine and Arginine essential components of the feline diet?
2
How essential is vitamin B3 to the diet?
11
Can a carnivorous animal consume plants with no adverse effects?
4
Sugars which are Carbohydrates and vice-versa?
1
Protein diet composition
1
When consuming carbohydrates and fats together, why are the fats caloric?