Why would the citrulline content of the watermelon be so high?

Citrulline is a non-proteinogenic amino acid (that is, citrulline is an amino acid that is not coded for in mRNA), and it is an important metabolic intermediate in the Urea Cycle. The Urea Cycle is critical for nitrogen (e.g. ammonia) excretion in humans as well as other mammals.

Citrulline is an interesting amino acid, given its vital function in the Urea Cycle, but also because it has such a high concentration in the watermelon. The name citrulline is actually derived from citrullus vulgaris, which is the Latin word for watermelon.

As a physiologist citrulline is very interesting metabolically, but I wonder why the watermelon would have such a high concentration? Why would that occur? Would high citrulline content offer some type of competitive advantage to the watermelon in terms of out-competing other plants? As biologists, we usually think about things from a teleologic perspective in order to make sense of the world around us. With that perspective, is there a logical reason that citrulline would be so enriched in the watermelon? It seems very odd that it would be the only plant with notable quantities.

According to molecular botanists and plant physiologists, watermelon is the only plant that is known to contain significant amounts of citrulline. Interestingly, it appears that the reason for this tremendous enrichment in citrulline stems from the environment in which wild watermelons naturally thrived hundreds of years ago prior to the development of agriculture.

According to botanists, drought is one of the most severe stresses to which a plant can be exposed. Drought generates a high level of free radicals and oxidative stress, in part because plants maintain their photosynthetic machinery even in the face of severe drought. A number of investigators have shown that different plants have unique molecular mechanisms/systems to allow them to tolerate such harsh conditions and oxidative stress.

Wild watermelon plants inhabit the Kalahari Desert in Botswana, where the annual rainfall is less than 2 cm. Despite the minimal rainfall, the watermelon (a xerophyte) can tolerate the extreme conditions well with an exceedingly high drought tolerance. Surprisingly, this tolerance to intense drought conditions by watermelon plants even persists despite a sub-optimally developed root system. In the case of the watermelon, citrulline is overproduced in the leaves (and apparently the rest of the plant) and citrulline acts as the major hydroxy radical scavenger that allows wild watermelon to tolerate the drought-induced oxidative stress. From this same source (Annals of Botany - link below), there are also other proteins that may also be involved in these mechanisms as well. Even though the citrulline content is predominately used in the leaves to buffer oxidative stress, it appears that it secondarily accumulates in the melon itself.

Note: The image below is from Annals of Botany paper in the links below - it is OPEN ACCESS, which is why I posted the picture and included the reference link. You can clearly see the before and after pictures of drought and how the watermelon leaves appear minimally changed, unlike the radish and cucumber leaves.

See below for some interesting Papers about citrulline, watermelon, and mechanisms of drought-resistance: 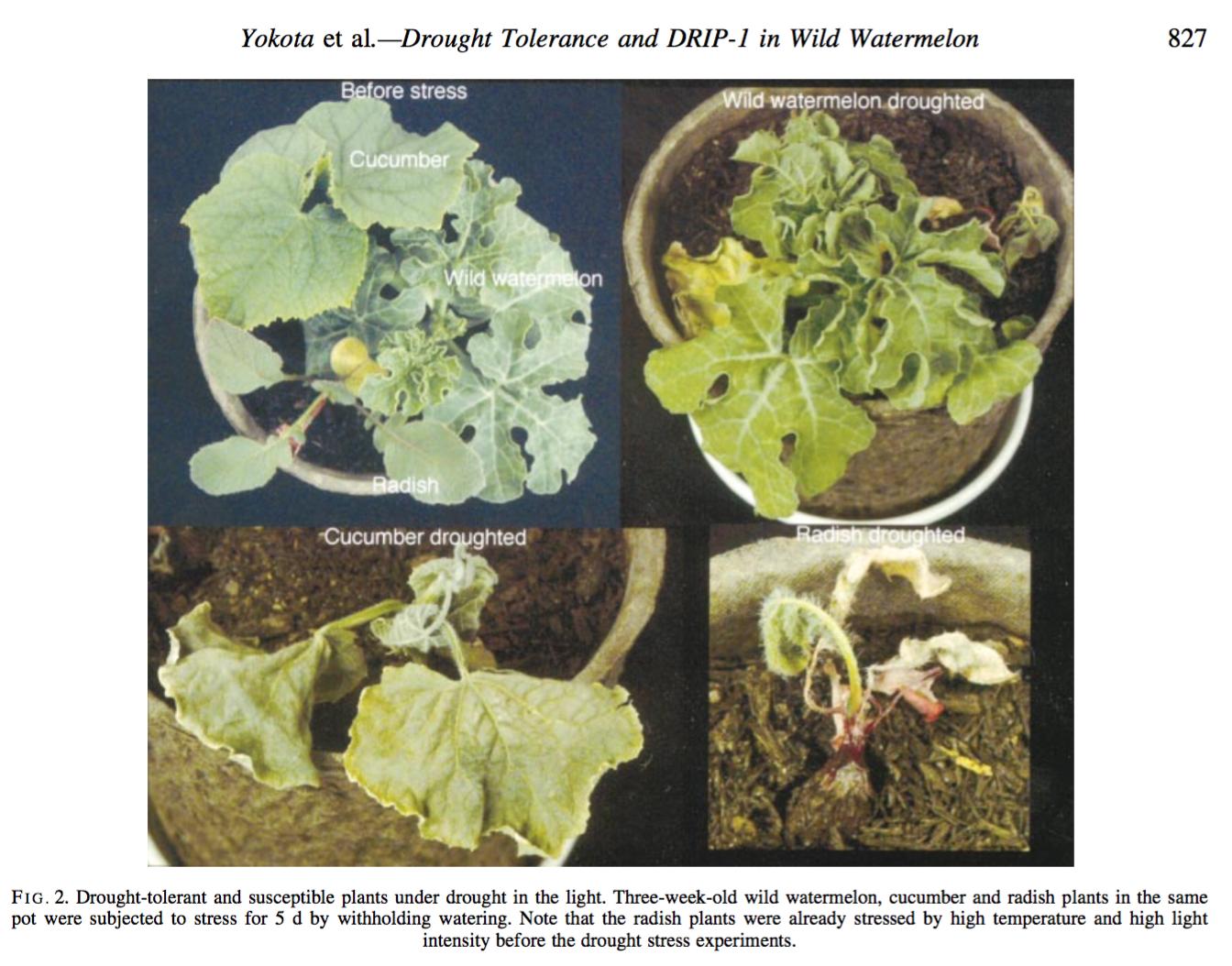 Not the answer you're looking for? Browse other questions tagged botany metabolism plant-physiology nutrition amino-acids or ask your own question.

5
Why does freshly cut grass smell like a watermelon?
3
Growing crops on the Moon
6
Why would lactate be high in diabetics?
4
Oxidation means inflamation?
3
Protein content in sprouted beans
2
Does Glycolysis produce lactate, or pyruvate?
2
How is the urea cycle regulated with respect to protein deficit?
2
Is chloride necessary for animals?